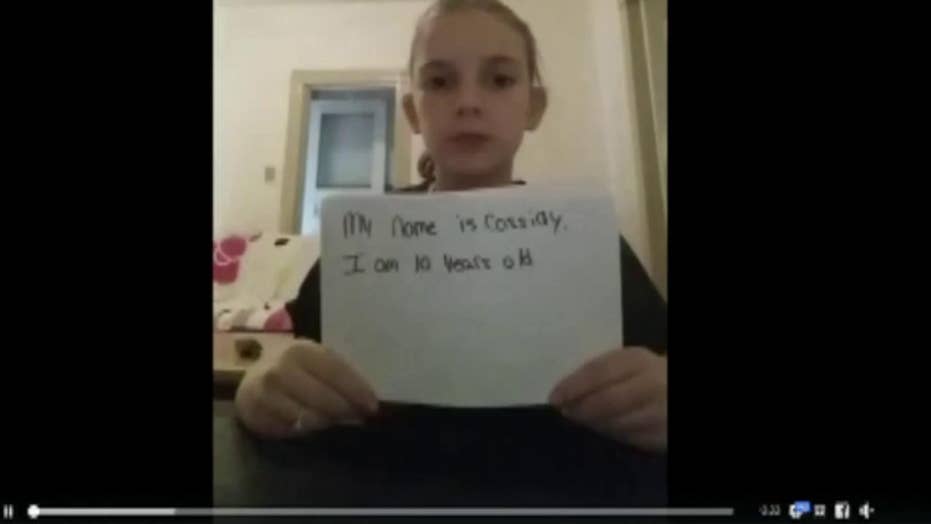 A 10-year-old girl posted a video to Facebook describing how she has been bullied since the first grade. Now the video is going viral, sparking support across social media, including Hugh Jackman. Watch Cassidy’s plea here.

A 10-year-old girl is urging people to stop bullying one another by sharing her own heartbreaking story in a video that’s now gone viral.

Cassidy Slater, a fourth-grader at John Adams Elementary School in Scranton, Pa., shared the video on Facebook. In it, she’s holding up signs that tell the story of how she’s been bullied since first grade.

“One day during recess, a group of kids grabbed my purse off a teacher, and spit on it and me,” one of her signs reads. She goes on to explain that kids have hit and kicked her, pulled her hair and won’t sit with her at lunch.

The bullying has gotten so bad, kids have even threatened Slater’s life. “They threaten to kill me and tell me to kill myself,” another sign reads.

Since posting, Slater’s video was flagged by another Facebook user and her account was shut down, according to her mom, Jenn. But before it was removed, the video had over 160,000 likes and thousands of shares, ABC News reports.

Jenn has since reposted her daughter’s video, which has also received a large amount of views, likes and shares. It's become so popular it caught the attention of Hugh Jackman, who shared it on his own page.

‪”Hi Cassidy .... I’m Hugh. I want you to know you’re loved, special & smart. You’re strong, funny & beautiful both inside and out. BULLYING IS NOT OK. Please never stop asking for help. You will find it from people and places you never thought possible. I’m your friend,” he wrote.

Slater’s dad, James Warner, told ABC News he didn’t know how bad the bullying had gotten until he saw his daughter’s video. "It just devastated me," Warner said. "I don't know how to explain how it made me feel...even talking about it I get choked up."

After the video gained popularity, Warner met with the principal of his daughter’s school as well as the Scranton School District superintendent to discuss ways to stop the bullying, ABC News reports.

Slater, who’s been getting positive comments from people all over the world, ended her video with an important message. “Stop bullying! Not just for me for other kids [too]. Please share my story!” Slater’s last sign reads.