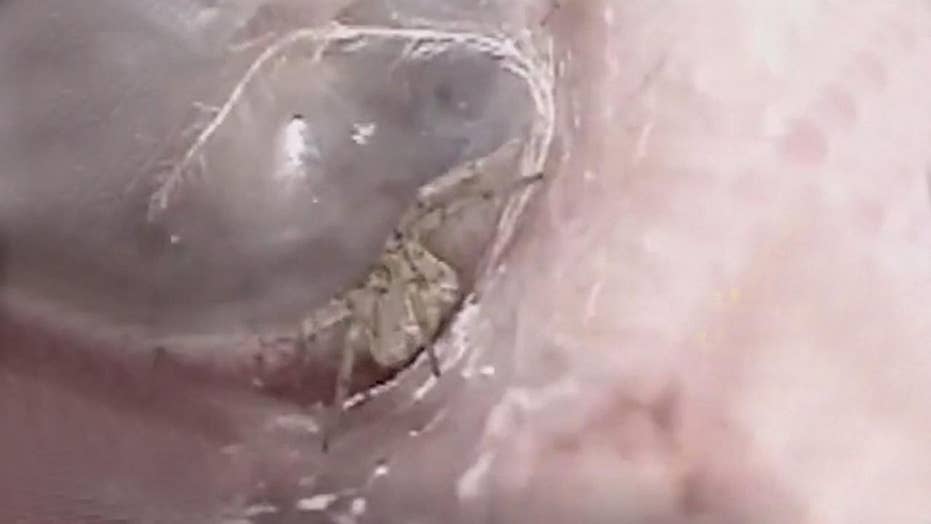 A spider was discovered spinning a web in a patient’s ear, a doctor claims.

A doctor found a spider living inside a man’s ear - and even spinning webs to make itself at home.

Ear, nose and throat specialist Cui Shulin shared images showing the bean-sized spider he found during an endoscope into the patient’s ear canal.

The medic from Dalian Central Hospital, north-east China, saw the pensioner in his 60s after he came in complaining of a possible insect in his head.

The unnamed patient described the discomfort as being like something "beating a drum" in his ear.

He said: "I felt discomfort in my ear while sleeping last night but I tried to ignore it.

"This morning the discomfort was still there. There were noises like something was beating a drum."

Doctor Cui and his nurses were stunned when the endoscope revealed a live spider had occupied the patient’s ear canal about two inches deep.

It had also spun elaborate webs to shield itself, the footage shows.

The experienced doctor eventually flushed the spider out by spraying the patient’s ear canal with water, later confirming that the man suffered no injuries during the arachnid occupation.

In a social media post, Cui wrote: "This old man showed up at our outpatient clinic today saying he thought there was insect in his ear.

"I performed an endoscopy and found a spider. The thing had spun webs," adding a laughing emoji.

The medic said he had seen numerous cases of flying insects such as ladybirds and most commonly cockroaches ending up in people’s ears.

But he noted he rarely sees spiders spinning webs and living in a person’s ear.

Read more at The Sun.