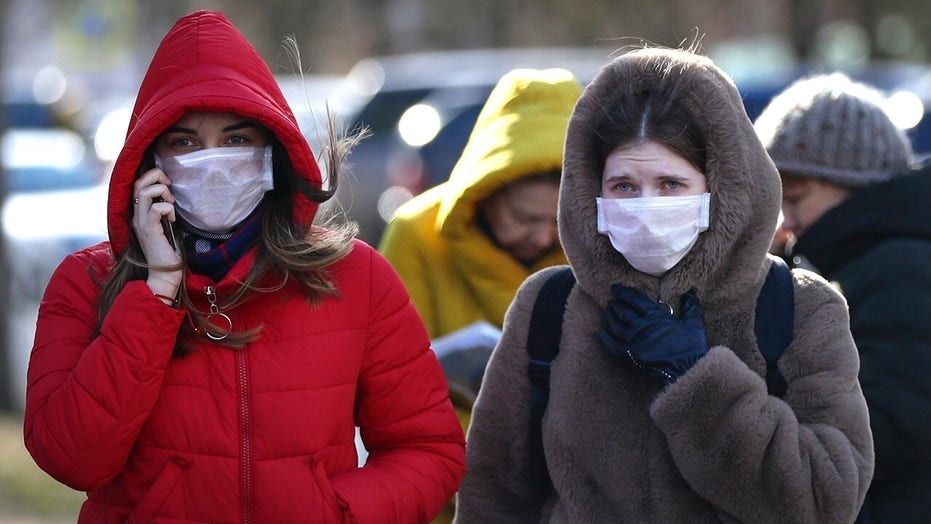 Coronavirus spreads to 53 countries as flights, events are canceled across the globe

The Venice Carnival, Saudi Arabia's Pilgrimage to Mecca and Geneva Motor Show have all been canceled due to the coronavirus; Benjamin Hall reports from London with the latest.

A British man who was sickened by the coronavirus while onboard the Diamond Princess cruise ship has died, reports citing the Japanese health ministry said.

The man, who had been in quarantine in Japan after testing positive for the virus, marks the first foreign passenger on the ship to die, according to Kyodo News. It would also mark the first fatality involving a British citizen, according to Sky News.

The health ministry did not immediately respond to Fox News’ request for additional comment.

Over 700 other passengers and crew who were on the ship were infected with COVID-19, which had for several weeks marked the largest instance of communal spread. South Korea has since surpassed the case count with 2,337 confirmed illnesses of its own.

As of Thursday, all passengers who had been quarantined aboard the ship were allowed to disembark, while less than 500 crew remained on board, according to an advisory posted by the cruise line.

“Princess Cruises has hired Aspen Medical, an award-winning and WHO-certified company with extensive global experience in delivering public health services, to provide team members with health and well-being care during quarantine at a land-based center in Japan,” the advisory said.

Those who remain in Japan are required to undergo an additional quarantine period in accordance with the country’s protocol.

Hundreds of Americans who had been quarantined aboard the ship were evacuated to the U.S. nearly two weeks ago, with the Centers for Disease Control and Prevention (CDC) confirming that 42 had tested positive for the coronavirus. Those cases are being counted separately from the other travel-related cases confirmed in the U.S., which as of Friday tallied 14. An additional case was confirmed in California in a woman with no known travel history to China and is considered to be the first case of unknown origin.

An American man who was on board the ship and is currently separated from his wife after he tested positive for the virus said that he didn’t start to experience symptoms until he woke up from a nap while on one of the State Department-chartered flights back to the U.S.

“The Diamond Princess, where we were taking our vacation, I think became a floating petri dish … but at that time, no one knew,” Carol Goldman said on “Bill Hemmer Reports.” “I did not realize that I had the virus until I got on board the plane back to the States, went to sleep, two hours later woke up with a fever that shot up over 103 [degrees]. And that’s when they quarantined me on board the plane as we flew back from Tokyo to California.”

FDA ANNOUNCES FIRST CORONAVIRUS-RELATED DRUG SHORTAGE IN THE US

He was immediately transferred to the University of Nebraska Medical Center, where he was eventually placed in a biocontainment unit. Goldman said he has since tested negative for the virus three times and that he is participating in a clinical study.