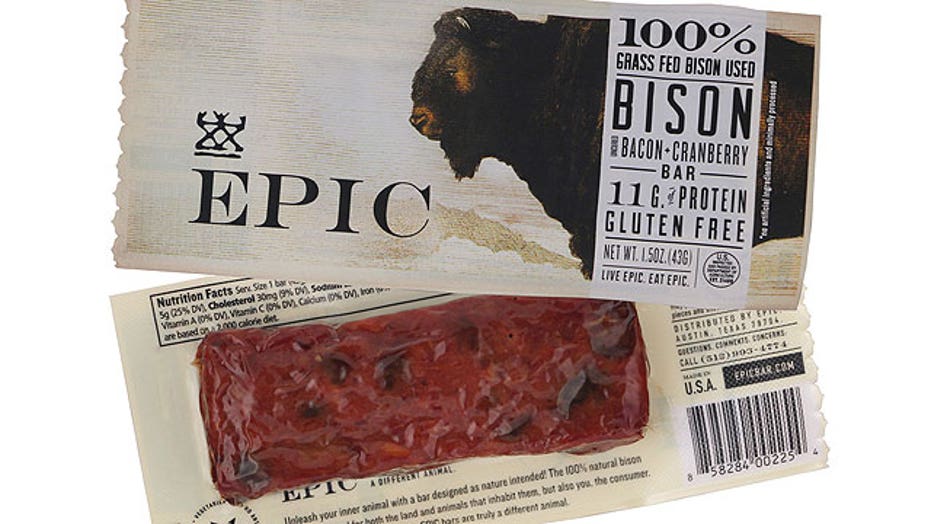 Snack on the go

Organic Epic bars make it easy to carry meat snack in your pocket.

Eating Paleo is pretty chic these days, but its meat-centric demands makes grabbing a piece of steak or lamb for the road pretty difficult.

Paleo followers believe that we should eat like our Paleolithic ancestors and shun grains, refined sugars, dairy and all processed foods --and reach instead for plenty of fresh veggies, organic nuts --and meat.

Epic founder Taylor Collins, says he was a vegetarian for almost two years when he began experiencing serious health problems. After going to the doctor, Collins and his wife Katie, were advised to reintroduce meat into their diet. The transition was life changing for the two athletes who compete in marathons and extreme events like Iron Man challenges.

“After reintroducing high quality, grass fed protein back into our diets, I had more energy and Katie’s intestinal problems went away,” Collins told FoxNews.com. But one of the biggest obstacles with low-carb diets is the lack quality snack foods available. Epic was born as a means to fulfill that need.

“For us, the biggest obstacle was creating a shelf stable product that didn’t have a bunch of preservatives in it,” Collins said.  “It took us about a year and a half to crack the code.”

Epic uses humanely raised grass fed bison from Colorado and Montana. They source turkey from Michigan and Pork from Texas. Beef and lamb are sourced both domestically and internationally to follow the company’s strict organic standards. Using traditional techniques of smoking and salt-curing, Epic is able to avoid adding preservatives to their natural meat bars.

And that's led to inventive flavors like Bison Bacon Cranberry, Beef Habanero Cherry, Lamb with Currant and Mint and Turkey with Almonds and Cranberry.

But their newest flavor is one of the most unusual we've ever seen: Beef Liver with Sea Salt. Collins admits this flavor wasn't intended to be the star of Epic's line up. But organ meat is a rich source of vitamins and minerals that often goes overlooked.

"I had to convince my wife and our team that it would be a good idea," Collins said. "We knew it wasn’t going to be a big seller but we wanted to continue to be sustainable and use more of the animal."

So how does it taste?

It's very salt and has an extremely dense mineral after-taste. There's no doubt about it, this bar has a ton of liver in it, and it smells worse than it tastes. So if you've never been a fan of organ meat we recommend the Bison Bacon Cranberry. It's salty with the perfect hit of tart sweetness from the berries.