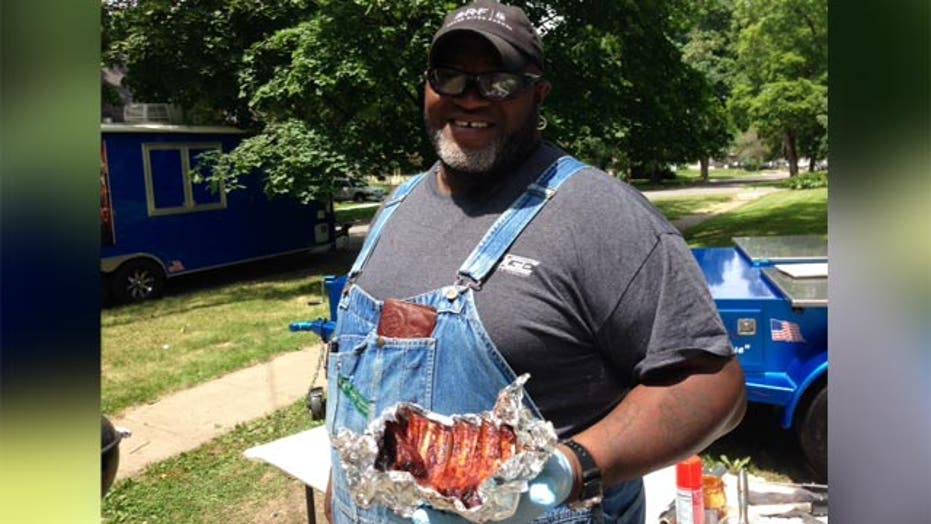 Des Moines, IA – Meet 'Big Moe' Cason of Ponderosa BBQ. His passion is grilling, smoking and barbecuing for family and friends and testing his skills on BBQ competition circuits.

Cason grew up in a household of cooks who loved to eat. His mother and grandmother taught him the basics. But it wasn't until 2006 that he got his start in competition BBQ.

Since then Cason has been on TLC BBQ Pitmasters, BBQ Pit Wars, and featured in a number of magazines for his grilling.

But before his time on the grilling circuit, Cason served as a Navy sailor aboard the USS Missouri. He loved grilling and barbecuing, but couldn't do much while serving.

"Obviously when you're on a ship you can't really barbecue when you're out in the middle of the ocean," says Cason.

When he got back from his tours, and discovered competition BBQ, it became a way of life. Cason's backyard is full of grills, smokers, and trailers he takes to competitions around the country.

'Big Moe' gave FoxNews.com some of his best tips to make finger-licking ribs. It starts with picking out the perfect cut of meat.

He says to avoid ribs that have "shiners" or when bone is protruding through the meat. He says those cuts won't be as meaty and juicy. Cason also says to look for fat and striations in the meat because it's what gives a lot of the flavor.

The next step is to remove the membrane from the back of the meat while the ribs are still cold. If left on, the membrane will leave a waxy taste and seasonings won't be able to soak in. Then spray the ribs with oil and gently coat each side of the ribs in a favorite rub or just salt and pepper for a more natural flavor. Let the meat sit for about 30-40 minutes while the grill preheats.

Cason says he likes to grill ribs at 250 degrees for two and a half hours.

"You want it already hot and ready, just sitting, ready for you to put your meat on."

Cason says that all grills cook differently, but he knows the ribs are ready when they start to fall apart when picked up with tongs.

Cason says a small inexpensive grill like a Weber Kettle can give the same results as a more professional model like a Big Green Egg. However, it is harder to maintain consistent heat in the cheaper grills. The nicer models make it easier to grill at a steady temperature, which is key to good BBQ.

About an hour or hour and a half into the cook, Cason suggests adding butter or apple juice to the ribs to put moisture back into the meat.

'Big Moe' uses his own homemade sauces and rubs on his BBQ. He brushes on the sauce anywhere between five and ten minutes before removing the ribs from the grill.

Cason stresses sauce should be used as a compliment, not as an overpowering flavor. "You want to get the flavor of the meat."

Now, the ribs are ready to cut up and enjoy.