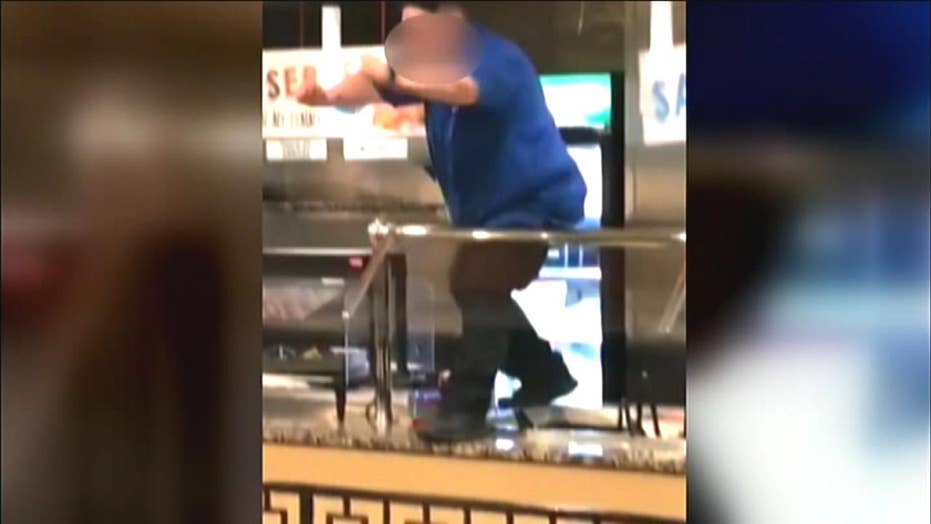 Employees recorded dancing on countertops, throwing food on their last day of work at Michigan pizzeria

A Michigan restaurant announced on Sunday it is shutting its doors this week, a day after videos posted by a "disgruntled former employee" showed a former manager dancing on top of the restaurant's pizza bar, though the company claimed the incident and the closing are unrelated.

Stevi B's Pizza Buffet in Woodhaven announced on its Facebook page it will be serving its last pizza pies on Thursday.

"Thank you, Downriver, for your 8+ years of support," the owner of the restaurant location wrote on its Facebook on Sunday.

The owner included an email for anyone interested in buying the franchise.

The day before, several videos were also posted on another Facebook page showing a woman dancing on top of the buffet counter. In one video, she is seen hopping on the counter, removing her skirt and rocking it back and forth between her legs as music blared in the background. The post included a caption: "They say don't burn bridges you may have to cross later. I say I don't mind swimming if the bridge was f--ked to begin with."

The pizzeria owner responded to the videos in a separate post on Sunday, saying "they were uploaded by a disgruntled former employees." The videos were filmed when the restaurant was closed.

"I understand if you were shocked and offended by these videos as I was too," the owner wrote in the post. "We count on the business from the community and are horrified that these events took place. I hope that you can accept my deepest apology and know that I will make sure that this does not happen again."

A spokesperson for the franchise commented on the post that the two employees involved in the videos were immediately fired.

"This is an isolated incident at this location and the behavior is against everything Stevi B’s stands for in serving our guests in Michigan and across the country," the statement read. "The restaurant was thoroughly cleaned to meet Stevi B’s strict cleanliness and food handling standards."

The company added the restaurant closing "is unrelated to this recent incident."