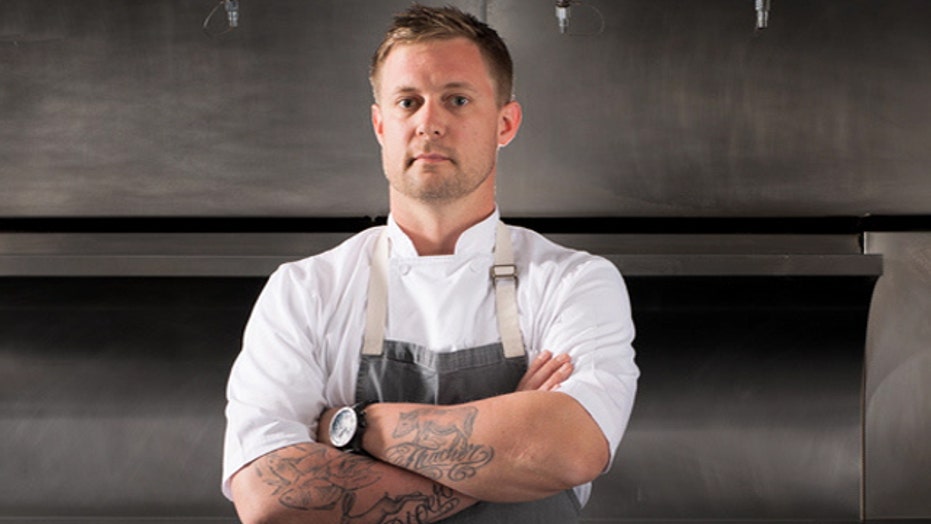 After his stint of

If you're a fan of "Top Chef,” then you've seen chef Bryan Voltaggio, who was a finalist on Bravo's hit show as well as "Top Chef Masters.”

But long before he became a culinary success on reality TV, Voltaggio was cooking contemporary American cuisine using produce grown around his hometown of Frederick, Md.

"We work with a lot of farmers in this area to grow things that aren't specific to us but definitely what our wish list is, and how we want greens grown to a certain length,” he said. “So we are getting the best sweetness or the size for the dish."

But it’s not just about local produce. It's about hometown roots. That’s why Voltaggio has opened a string of restaurants in the area that made himself a fixture in the culinary community and a true Kitchen Superstar.

Volaggio got his start in the kitchen when he worked as a sous chef while in high school. He studied at the Culinary Institute of America in New York and went on to work under famed chef Charlie Palmer before he opened up Volt in Fredrick in 2008. Just seven months later, TV producers reached out to him to be a contestant on "Top Chef,” where he famously competed and ultimately lost to his younger brother, Michael.

His career hit a high in 2009 when Volt was nominated for “Best New Restaurant" by the James Beard Foundation.

But that was just the beginning. After Volt, Voltaggio opened another eatery, Family Meal—also in Frederick, which features an informal dining experience for families looking for a quick meal with fresh ingredients.

And he kept on coming. Voltaggio opened Lunchbox--a cafeteria-styled sandwich shop in Fredrick and Aggio restaurant, with two locations in Baltimore and Washington, D.C., where he pays homage to his Italian American heritage. There is also Range, in Washington, D.C., which is a chef's playground and a celebration of the food available in the Mid-Atlantic region. Diners will see the different stations for each category of food — a pasta station, a raw bar, a grill and, of course a bakery.

Voltaggio is driven to create dinning experiences that aren't the same, but united by the quality of food --a philosophy inspired by his location.

"I really got sort of entrenched with the idea of cooking with ingredients that are from around you. Not because it's a trend or a fad or anything like that but because we believe that's where you get the freshest ingredients."

Voltaggio says he loves what he does. And here's why.

“So it's always that searching and creating that's the fun part about what I do. That's why I wake up every day. That's why I love to cook."