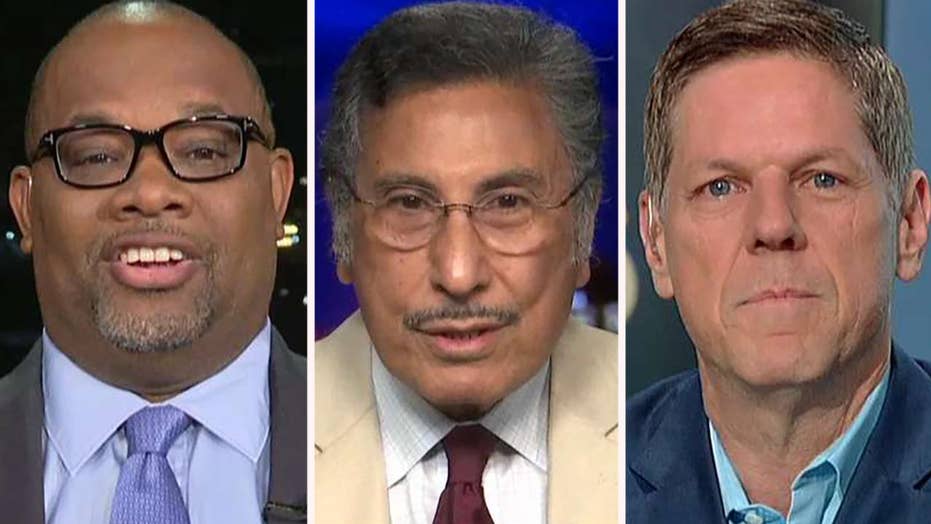 Half of American pastors worry about offending parishioners while preaching on controversial topics: study

A new study shows that half of American pastors worry about preaching on hot button social issues - like abortion and LGBTQ issues - worried they might offend someone.

Pastor Corey Brooks, Pastor Michael Youssef, and Pastor Ron Lewis open up on "Fox & Friends" about the pressures facing worship leaders around the nation after the Barna Group published the results earlier this year.

While the majority of pastors agree their job is to help Christians have biblical beliefs about specific issues, many feel added pressure from outside and within the church and are struggling to figure out how to communicate in the public sphere.

Brooks, the pastor of New Beginnings Church of Chicago, said it's the job of preachers to communicate God's word and the truth. Otherwise, he said, they're limiting themselves.

"We have to preach the whole counsel of God," Brooks said. "The gospel we preach is not always a comfortable message so we have to preach it and declare it regardless of how we feel."

While Brooks doesn't personally feel the pressure, he can see where it's coming from.

"I think the pressure is for a lot of pastors to be bold, to be loving and to set examples," Brooks said. "I think a lot of preachers around the country carry that pressure from day to day. There's a great need in our society for us to preach what we preach and teach what we teach, but from the study, it appears a lot of pastors are having a difficult time doing that."

Yousseff, the founder of Leading the Way Ministry in Atlanta, agrees there is pressure, but notes pastors have a decision to make.

"In the end, you have to decide, 'Are you going to please God and obey His word or are you going to please people?'" Youssef said. "Now as Bible-believing Christians, we love everybody. We have no foes because love casts out fear...but as we love people, we must say as pastors, thus says the Lord."

And when it comes hot button issues, Youseff doesn't shy away.

The reason morality has gone out of the window is because the pulpits -- and I lay the blame on the pulpits and the preachers -- have ceased to preach the truth.

The pastor in Georgia believes it's their job to speak the truth in love without fear because it's the pastor's job to speak for God to the congregation.

"The moment that is reversed, we're going to please people and we're not going to please God, we're in trouble, and that's what's happening in America," he added. "The reason morality has gone out of the window is because the pulpits -- and I lay the blame on the pulpits and the preachers -- have ceased to preach the truth."

Lewis, the pastor of Every Nation Church in New York City, said the pressure is to have the "right tone, speaking the truth in love, it's having good quality information on what the issues are and how to address them, so I think we're changing with the times, and that is not the message as much as the method and really understanding our audience and their needs as well."

The pastor in the Big Apple said Jesus is the greatest model and example for any Christian, pointing to the story of Jesus and the woman caught in the act of adultery.

Instead of stoning the woman as the law commanded, Jesus challenged the people, for whoever was without sin to cast the first stone. One by one each of them left until it was just the woman and Jesus.

Jesus asked her if anyone condemned her, and he added, neither do I.

"I think in that example we have both grace and truth," Lewis said.

"But He also said to her go and sin no more," Yousseff added.

"Yes, He did...and that's where the truth comes in...and grace and truth work together," Lewis concluded.