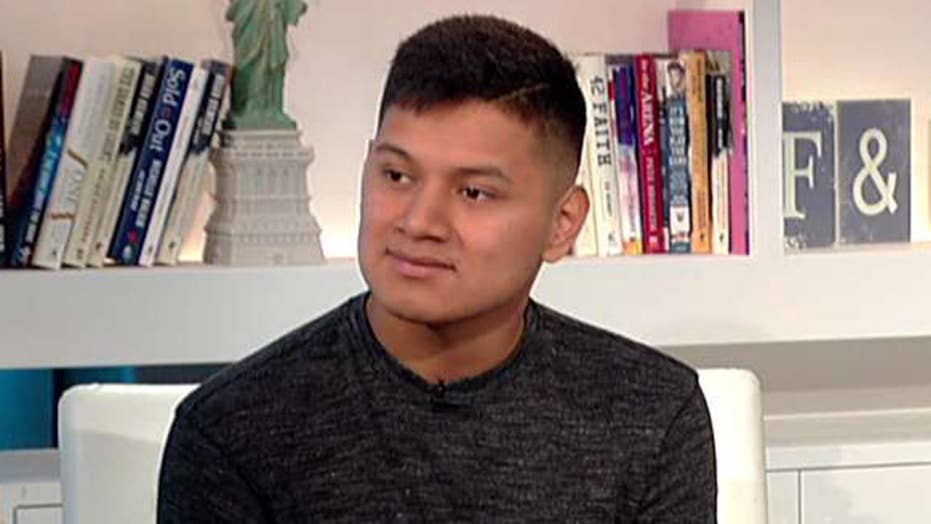 John Smith, an adopted boy from Guatemala, is a living, breathing, walking miracle and his unbelievable true story is going to the big screen April 17 in the 20th Century faith-based film, "Breakthrough."

John was 14 years old when he fell through the ice in a Missouri lake. When rescue crews got him to the hospital, he was declared dead for 45 minutes.

His mother, Joyce, played by Chrissy Metz from "This Is Us," prayed to God to bring back her son. His pulse miraculously returned.

"My mission is to share that God still does the impossible and He's still in the miracle-working business," John told "Fox & Friends" Tuesday morning. "I'm just excited to see how 'Breakthrough' is going to change the world."

John's pastor, Jason Noble, got to the hospital right after Joyce prayed and he felt like God had called him to stay by John's side for seven days, 18 hours a day.

"The doctors said that there was a 1 percent chance that he would make it overnight. If he did that he would be a vegetable for the rest of his life. I mean they were starting an organ transplant. It was so serious, and we took a group of pastors into the room and we just started praying for him," Noble said. "We called out to God and, through a series of incredible miracles, he walked out of the hospital 16 days later."

John, who wasn't a Christian when he fell through the ice and miraculously survived, said he eventually received a call from God to become a pastor after his mother's prayers seemingly brought him back to life.

As he was searching for answers, waiting and praying to God, he got an answer at a youth camp.

"[I was] constantly fighting God and Him just saying, 'Keep listening to Me, just pay attention, just walk where I need you to walk.' And then finally, after I started to realize that the earthly idols that I have been chasing are coming to an end, it's time to be chasing toward the heavenly gold,” John told the Christian Post.

And when it didn't wear off, John realized it really was God speaking to him.

“[That’s] Him just calling me to ministry," John added. "I'm truly excited to see where He's going to take me."

The 20th Century Fox movie is based on Joyce Smith's book, The Impossible, and was adapted for the screen by Grant Nieporte ("Seven Pounds").