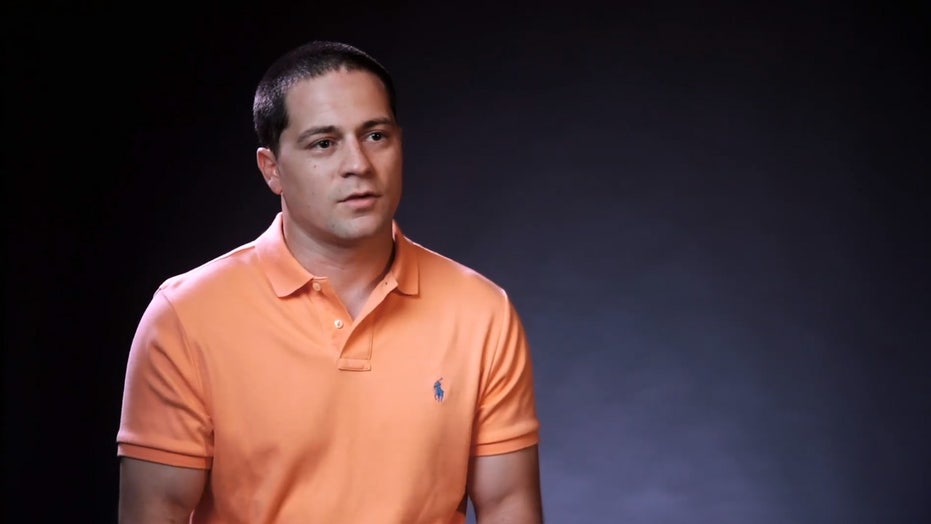 A Virginia Beach man was given the city's "Lifesaving Award" Wednesday afternoon for his heroic deed and "perfect timing" that saved a man's life.

Collin Dozier, a 31-year-old four-time state wrestling champion and coach, saw a parked car on the side of the Lesner Bridge where a man was leaning over the water.

Dozier told Fox News: "Out of all people, God put me there at the right place and the right time."

Collin Dozier, 31, saved 27-year-old Jacob's life after he attempted suicide a few weeks ago. Now the two go to church together as Jacob is working to get his life back. (Trinity Church)

He immediately realized that Jacob, a troubled 27-year-old, was trying to commit suicide, so he leaned over the railing, about 10 feet away from him, and asked what was going on. He got no response.

"That's when I said, 'Don't do it. Jesus loves you. He's here for you,'" Dozier explained to Trinity Church last Sunday in a video. "It got to the point where I felt helpless and the only thing I could possibly do was turn to the Lord and pray."

What Dozier didn't know was that Jacob had already tried committing suicide twice that week and this was his third attempt. He had taken $3,000 worth of drugs -- heroin, PCP, meth, cocaine -- to help him get the courage to jump off the bridge.

The Good Samaritan reached out his hand and prayed that the troubled man would hear from Jesus and see His love. He shared the scripture Jeremiah 29:11 with him.

But when police arrived, the man panicked and allegedly told them to back off or he would use his gun to commit two murders that night. But Dozier, who was within feet of him, wasn't fazed.

"There wasn't the slightest bit of doubt that I should walk away at that point," he told WAVY.

Dozier told the man how he turns to the Lord when he goes through tough times, and each time the troubled man closed his eyes, counting under his breath as he prepared to jump, Dozier inched closer until he knew it was the perfect time to take action.

"I knew I only had one chance to do it and do it right," Dozier said. The accomplished athlete pulled him back with a wrestling grip and the police were able to get him the help he needed.

Dozier rallied 110 men at a weekend retreat to pray for Jacob each day and on Saturday Dozier connected with him on the phone.

"He was overwhelmed that I talked to him and cared enough about him," Dozier shared. "He said ‘I’m so thankful to be alive. I can’t thank you enough.’"

Dozier shared about a friend who dealt with a heroin addiction and turned his life around after he gave his life to the Lord.

And on Sunday Dozier was able to visit Jacob at the rehabilitation clinic and the two went over the gospel.

2-YEAR-OLD’S 'MIRACLE' HEALING SPARKED WORSHIP ANTHEM: ‘WE BELIEVE IN THE POWER OF PRAISE’

"The love you shared with me that night – you didn’t even know me – I want that," Jacob told him.

Then Jacob accepted Jesus, and the man who had taken drugs every day for the last 10 years, has been sober for three and a half weeks now. He is now attending church and a community group.

“I think the whole story points to the fact that when the spirit talks to us and we obey, supernatural things happen," Singer said. "That Collin is a former state wrestling champ that just happened to be driving that night…we don’t see that as coincidence, we see that as the God of all the universe at work.”