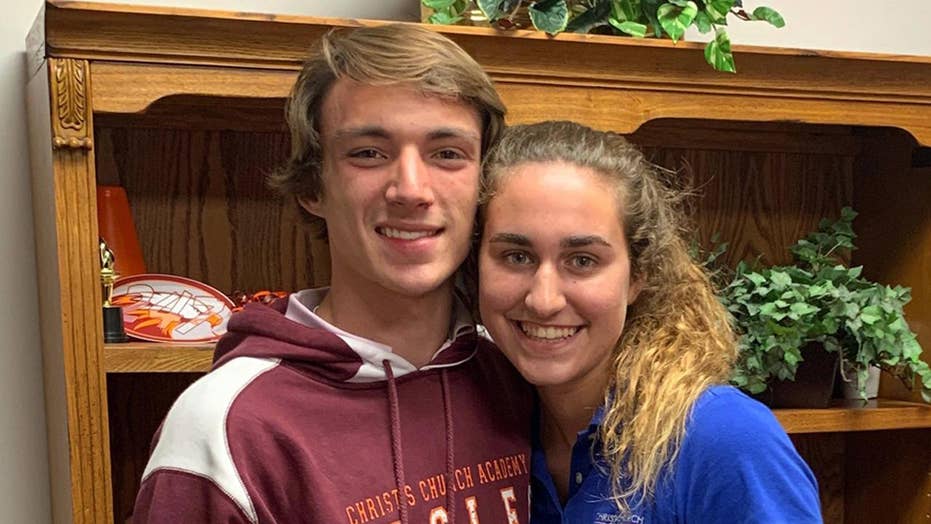 Two Florida teens, Tyler Smith and Heather Brown, were rescued two miles away from the St. Augustine shore after being stranded for two hours and almost giving up all hope.

Two Florida teens were enjoying senior skip day at the beach when they found themselves stranded in the ocean.

Tyler Smith and Heather Brown, Christ's Church Academy students who've been friends since fourth grade, were swimming off of Vilano Beach, near St. Augustine, on Thursday, April 18, when they realized they might not make it back to shore.

Weak and tired from fighting the waves for two hours and two miles offshore, the 17-year-old soccer players told Fox News they started praying to God and crying out for help.

“I cried out: 'If you really do have a plan for us, like, come on. Just bring something,'” Tyler recalled to FOX 30.

Tyler Smith, 17, and Heather Brown, 17, friends since fourth grade, were stranded in the ocean for two hours before being rescued by a boat named "Amen." They are pictured on their senior mission trip to New York City in March. (Christ's Church Academy)

Tyler held onto Heather as he started cramping, and just in time, Captain Eric Wagner and his crew found them.

"Over all the wind, waves, and engines, we thought we heard a desperate scream," Wagner told the local station. "Exhausted and near the end, the boy told me he called out for God's help. Then we showed up."

Wagner called the Coast Guard as he took his boat, "The Amen," to their rescue. The crew, headed from Delray Beach to New Jersey, decided to go out despite the rough waves to go on an adventure. Both Wagner and the teens were thankful for that decision.

"I told them the name of the vessel, that's when they started to cry," Wagner said. "The young couple was gracious and grateful to us and to God. It was the latter all along."

The two friends, who graduate on May 19, both plan on serving in the military and believe this experience will help them.

"From us crying out to God, for Him to send someone for us to keep living and a boat named 'Amen,' there's no way that it wasn't Him," Tyler told Fox News.

Jeanie Collins, director of marketing and development at Christ's Church Academy, told Fox News the school is grateful they are alive.

“The staff, students and families of Christ’s Church Academy are incredibly grateful for God‘s protection over Heather and Tyler," Collins said. "Thank you to Mr. Eric Wagner, captain of the 'Amen' vessel that rescued our students, for your action and compassion!”