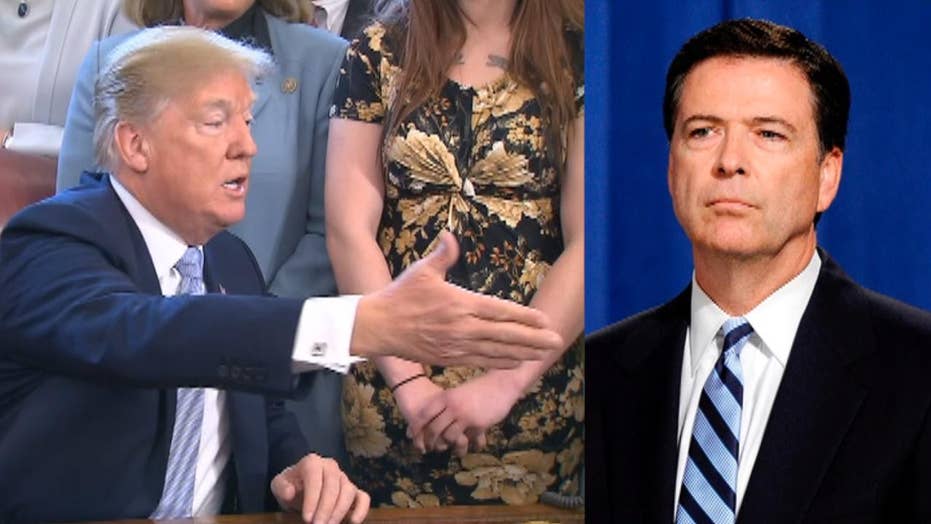 James Comey's book tour has given the press new license to discuss unverified, lurid claims about President Trump's alleged activities in a Moscow hotel room, yet the former FBI director still admits he has no evidence they are true.

For months before the 2016 election, much of the media was aware of an unverified dossier generated by Hillary Clinton's campaign and then used by the Obama Department to Justice to obtain a warrant to spy on Trump's campaign. The dossier claimed without substantiation that Trump cavorted with prostitutes who urinated on each other.

The claim was so outrageous, disgusting and lacking in evidence that even the most left-wing media outlets steered clear. But Comey has put it all back in play as he touts his new book bashing the president who fired him.

"I honestly never thought these words would come out of my mouth, but I don't know whether the current president of the United States was with prostitutes peeing on each other in Moscow in 2013,” Comey told Disney-owned ABC News.

Comey went on to say Trump's outrage at the dossier's allegation, of which Comey told him, did not ring true because Trump worried that there was a 'one-percent chance' his wife might believe it.

"In what kind of marriage, to what kind of man, does a spouse conclude there is only a 99 percent chance her husband didn’t do that?" Comey mused in the book, according to the New York Post.

While Trump has repeatedly said he’s a germaphobe grossed out by the accusation, his critics in the mainstream media have used Comey’s comments as an excuse to lift the curtain on filthy, salacious and uncorroborated rumors.

Media Research Center Vice President Dan Gainor told Fox News that America has left the world of news and headed into one of narrative.

CNN, which has dedicated much of its airtime in recent weeks to promoting the career of an adult film star, now appears focused on helping Comey sell his anti-Trump book – which is a common theme among the mainstream media at the moment.

CNN has featured chyrons referring to “hookers,” while The New York Daily News published a cover headline calling the President of the United States a “pee brain,” complete with yellow blotches meant to resemble urine stains. Publications such as HuffPost, Daily Beast, Mediaite and The Hill have published headlines that aren’t exactly family friendly, and every Trump critic seemed to make a joke on Twitter regarding Comey’s comments.

MSNBC’s Joy Reid tweeted to her 1.18 million followers that “Trump’s obsession with the dossier and the alleged pee tape was severe, apparently,” while NBC’s “Late Night” host Seth Meyers told his audience that the unverified rumors are real.

“Oh my god, it’s real,” Seth Meyers said. “It has to be. Why would you ask the FBI director to investigate a pee tape if you knew for a fact that pee tape definitely didn’t exist?”

Kellyanne Conway appeared on “Fox & Friends” on Friday morning, calling Comey a “disgruntled ex-employee” who is retroactively putting his own spin on things to sell books.

Trump responded on Friday by slamming James Comey as an “untruthful slime ball who was, as time has proven, a terrible Director of the FBI.”