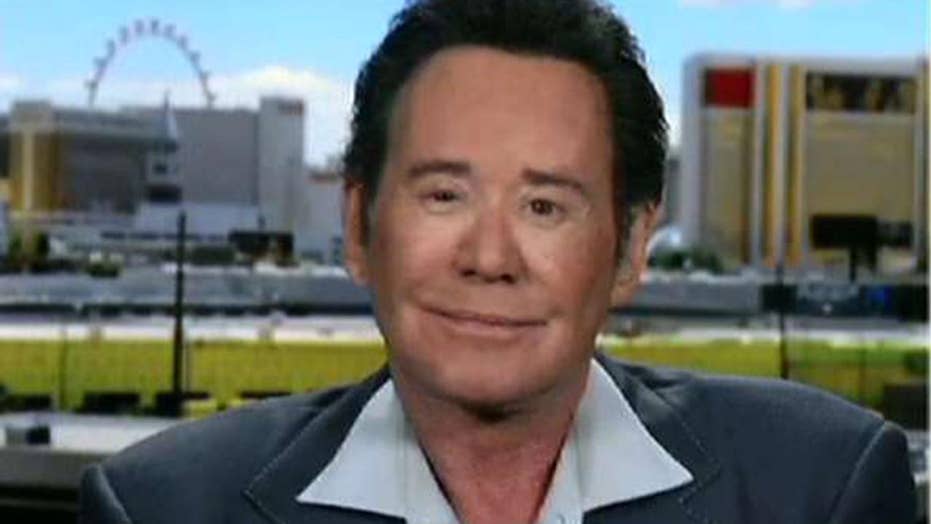 Wayne Newton says the show must go on after Las Vegas

Mr. Las Vegas shares his thoughts about the chaos.

Wayne Newton is saying "Danke Schoen" to a jury that convicted a burglar who broke into the singer's Las Vegas home last year.

On Friday, a Nevada jury found Weslie Hosea Martin, 22, guilty of 12 felonies, including home invasion, theft of a firearm, robbery with use of a weapon and possession of a weapon by a felon.

Martin may face life behind bars, as he a prior record of burglary-related and firearms convictions.

He will be sentenced in the Newton case on Aug. 15.

Martin's public defenders Will Ewing and Chris Peterson told jurors he was accused of crimes he did not commit. Peterson said they will seek leniency at sentencing and will evaluate the case for appeal.

Newton, his wife Kathleen McCrone Newton, and their 17-year-old daughter testified Tuesday about encountering two burglars fleeing their home. The family was not in the courtroom for the verdict.

WAYNE NEWTON REVEALS WHY HE'S THE 'HAPPIEST' HE'S EVER BEEN

WAYNE NEWTON EXPLAINS HIS CLOSENESS TO HIS FANS

Newton previously testified that he carries a gun and fired a shot in the air to scare away two burglars that he and his family apparently surprised when they arrived home after one of his Las Vegas Strip performances.

The 77-year-old "Danke Schoen" singer said his wife cried out that one fleeing man raised a tire iron as if to hit her before using it to attack one of the family's large Rhodesian Ridgeback dogs. The other dog chased the other burglar.

The Newtons weren't injured in the incident, but their dogs were treated by a veterinarian for head injuries and broken teeth. Police reportedly found evidence the intruders tried but failed to pry open a safe in the home.

WAYNE NEWTON: DONALD TRUMP IS ONE OF THE NICEST PEOPLE I KNOW

"What he was charged with is what he did. Plain and simple," Giordani told the jury during closing arguments.

The trial took three days and the jury of seven women and five men deliberated about six hours.

Weslie Martin, accused of burglarizing Wayne Newton's home, is escorted out of the courtroom following his hearing at the Regional Justice Center in Las Vegas, Friday, June 21, 2019. A Nevada jury found martin, a 22-year-old state prison inmate guilty of burglarizing the mansion of "Mr. Las Vegas" entertainer Wayne Newton twice in June 2018, and of trying to break into a neighboring home. (AP)

Martin's lawyers conceded that Martin's face was captured on a doorbell security camera at a neighboring home the night of the first Newton home burglary. The Newtons were in New York at the time.

Authorities say Martin later sold items taken that night to a coin and jewelry business. He was arrested in July 2018 and sent to prison for a firearms conviction.

The defense attorney also pointed to Kathleen Newton's two-page written statement for police, which said nothing about having been threatened with a tire iron.

Wayne Newton is marking his 60th year performing his signature song, "Danke Schoen," in Las Vegas and on tour. He used a cane in the courtroom, telling the jury he had recent back surgery.