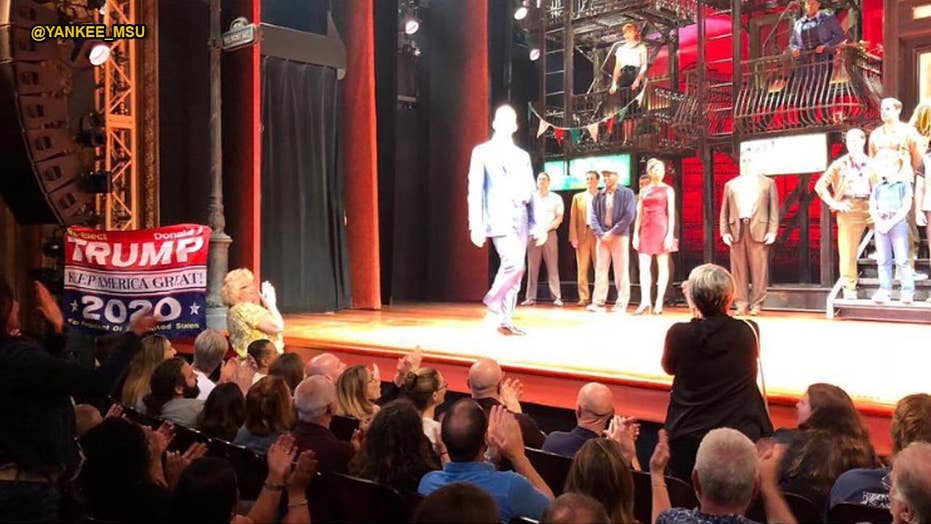 A Trump supporter tried disrupting a performance of the Robert De Niro directed musical 'A Bronx Tale.' Standing up during the curtain call and displaying a 'Keep America Great!' flag towards the audience.

A Trump supporter tried disrupting a performance of the Robert De Niro directed musical “A Bronx Tale” on Saturday — standing up during the curtain call and displaying a “Keep America Great!” flag towards the audience.

“The times we live in,” tweeted audience member Joe Del Vicario, along with a pic showing the Broadway protest.

“At the end of [the performance], a man turned around and faced the audience to show us how big of a pair he has,” Del Vicario explained. “He was escorted shortly after.”

Several people in attendance took to social media to document what happened on Saturday night at the end of the 8 p.m. showing of “Bronx Tale” — which is directed by De Niro and four-time Tony Award winner Jerry Zaks.

Photos posted on Twitter showed the Trump supporter standing up in the front row with the “Keep America Great” campaign flag in his hands as cast members take their final bow.

People in the crowd, however, looked like they couldn’t have cared less.

In the photos posted online, almost everyone in the first few rows has their eyes locked on the stage, including the people right next to the man. His demonstration appears to be a direct response to the “F–k Trump” comments that De Niro made during the Tony Awards last week.

“It’s sad that people can’t enjoy a beautiful show and embrace its unifying message without politicizing it,” Del Vicario said.

Brian Strumwasser, a hair department supervisor on “Bronx Tale” and several other productions, agreed — saying the man “disrespected” the cast and crew.

“Whoever the low life scum bag who thinks it’s ok to post their political views at a Broadway show and disrespect everyone there who paid to watch a show that is ALL ABOUT INCLUSION was thankfully removed from the theater Saturday night,” Strumwasser wrote on Instagam Sunday.

“Robert De Niro is one of our directors and has started in the movie and was able to make 6000 people roar and cheer @thetonyawards for saying ‘F*CK TRUMP,'” Strumwasser added. “If @realdonaldtrump wants to visit @bronxtalemusical maybe he himself will learn what racism is and how we deal with it. #f–ktrump…#dontf–kwiththebronx.”

Saturday’s incident isn’t the first time that one of the president’s supporters has attempted to disrupt a theatrical performance in NYC. Two people jumped on stage during the Central Park production of “Julius Caesar” last Summer to protest its depiction of Trump as the title character.