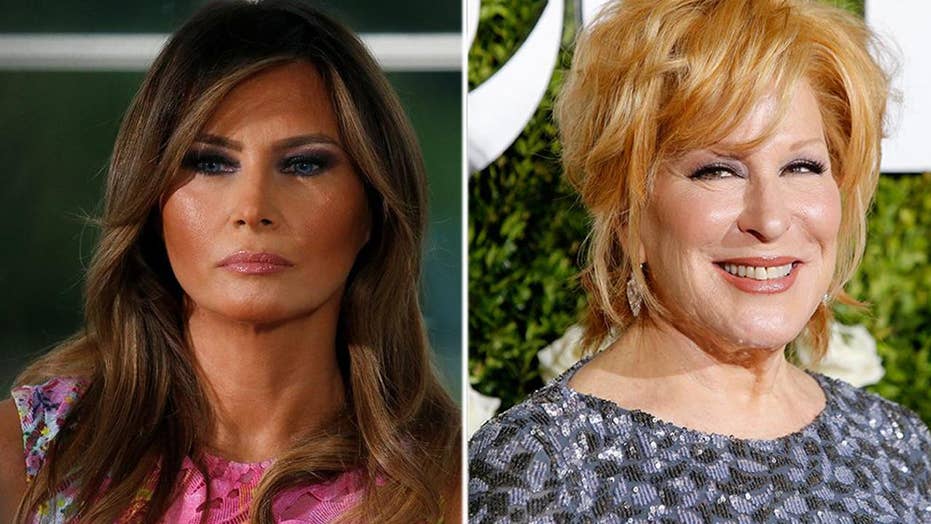 Bette Midler, who last month called women the 'most disrespected creatures on earth,' is now in hot water for showing disrespect to First Lady Melania Trump. The actress-singer posted a picture on Twitter of Melania posing in a cockpit for a GQ photo shoot, and included a vulgar, insulting caption.

Bette Midler, who last month called women the "most disrespected creatures on earth," is now in hot water for showing disrespect to first lady Melania Trump.

On Thursday, the 72-year-old actress-singer posted a picture on Twitter of Melania posing in a cockpit for a GQ photo shoot, and included a vulgar, insulting caption.

"The dry cleaning bill for the upholstery on Air Force One must be insane. #FLOTITS," Midler wrote.

Social media users immediately took to Twitter to slam the star and called on her to apologize to the first lady.

"Why are you doing this? Haven’t you had enough of bashing this poor woman? She was a model, so what. Don’t hate. You really just made a fool of yourself with such a catty comment. Did you feel better after posting this? That made you feel good? You should apologize," one Twitter user wrote.

"Now you've moved on to body Shaming? You? Honestly? Is this what you want your daughter to be like as well. Teach her that if you disagree Politically that all bets are off when it comes to how you are as a human being? #Shameful," another individual tweeted.

One social media user commented: "Disagree on politics all day long, but this is a mean-spirited and childish jab at a woman's choices. THIS is what has finally made me put away my love for your great talent. You are a hypocrite."

Tweeted another: "You’re considered by some an Icon a advocate for women....this is so disgusting! what happened to all women should lift each other up? What did this women ever do to you? You should be ashamed of yourself so disappointing."

"What a shame! U were 1 of my favorite actresses & singers growing up! My mother would listen2 your songs all day & that is where I got my love for4u! My children also fell in love with yr music! 1of their favorite movies was HocusPocus! u just hurt alot of people that loved U!"

Last month, Midler sparked social media backlash after posting a racially insensitive tweet about feminism, in which she said “women are the N-word of the world” and the “most disrespected creatures on earth.”

“‘Women, are the n-word of the world’ Raped, beaten, enslaved, married off, worked like dumb animals; denied education and inheritance; enduring the pain and danger of childbirth and life IN SILENCE for THOUSANDS of years. They are the most disrespected creatures on earth,” she tweeted on Oct. 4.

Midler was apparently quoting the title of the 1972 song written by John Lennon and Yoko Ono, which she referred to in a since-deleted post.

Social media was quick to call out Midler, who is white, and remind the actress of American history.

“Fact: Many white women-owned/abused slaves right along with their husbands. Ever seen a lynching picture? Guess what you don't see: White women crying. Respect American History,” one Twitter user said.

A few hours later, Midler apologized for her tweet and said, “The too brief investigation of allegations against Kavanaugh infuriated me. Angrily I tweeted w/o thinking my choice of words would be enraging to black women who doubly suffer, both by being women and by being black. I am an ally and stand with you; always have. And I apologize.”