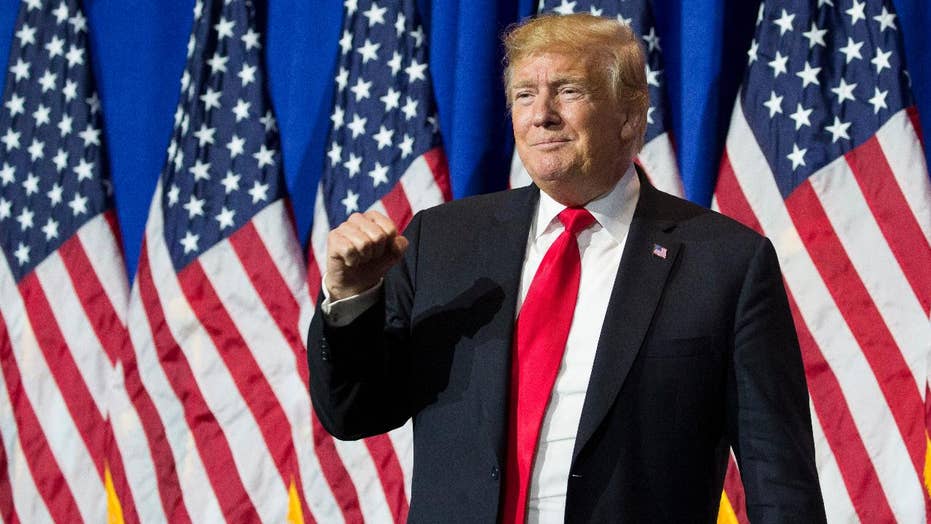 “Saturday Night Live” has returned with its 45th season, and it wasted no time diving into the polarizing political climate by adding to the discussion around Donald Trump’s impeachment with three separate sketches, including the cold open, as well as a dedicated "Weekend Update" segment.

Alec Baldwin and Kate McKinnon kicked things off with a phone call Baldwin’s Donald Trump made from the Oval Office to McKinnon’s Rudy Giuliani to tell him he was being impeached, which he called “the greatest presidential harassment of all time — I’m like the president of harassment.” But soon enough new cast member Bowen Yang got his moment to shine, too. As did special guest star Liev Schreiber.

McKinnon’s Giuliani just wanted the president to relax, telling him that no one would be able to figure out about their illegal side dealings with the Ukraine — “or how we tried to cover up those side dealings. Or how we plan to cover up the cover-up.”

HOW WOODY HARRELSON'S 'SNL' MONOLOGUE COMMENTS ON THE STATE OF COMEDY

Beeping into Baldwin-as-Trump’s call waiting was Aidy Bryant as Attorney General William Barr, who told him not to worry because he had his “top guy” on this. But when that “top guy” got on the line for a three-way call, it was just McKinnon-as-Giuliani again.

Baldwin-as-Trump knew he had to find “the perfect stooge” to take the blame for everything, and with that he called “Big Mike” aka Mike Pence (Beck Bennett). “But you’re the one who broke the law,” Bennett-as-Pence said. That call was cut short so Baldwin-as-Trump could talk to his sons, Eric (Alex Moffat) and Don Jr. (Mikey Day)

“I can’t believe the lame-stream media is focused on you and not the corruption of Joe Biden’s son,” said Day-as-Don Jr. 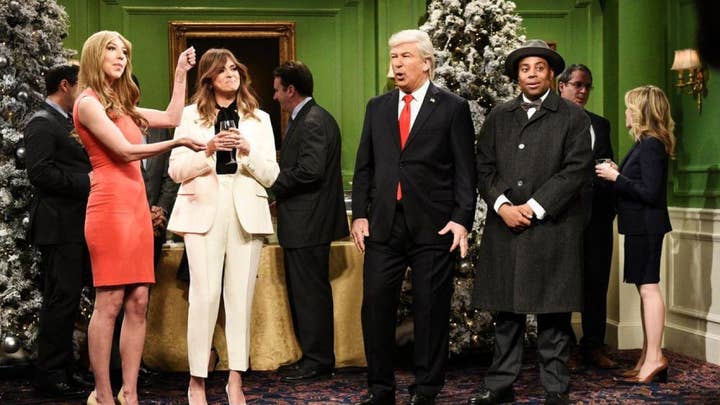 “I know. By the way did you take car of that thing in Russia for me?” Baldwin-as-Trump replied.

“What thing in Russia?” Day-as-Don Jr. said with a laugh.

“The treason!” piped up Moffat-as-Eric.

Yang then popped up on-screen, to loud audience cheers, as Kim Jong-un, who Baldwin-as-Trump called looking for advice on a whistleblower.

“You have a big ocean in your country? OK, send whistleblower to the bottom of there” was Yang’s advice. To this, Baldwin-as-Trump said he wished America was as cool as North Korea.

But the antics didn’t stop there, with Chris Redd reprising his role as Kanye West to call next, telling Baldwin-as-Trump they couldn’t be “fam” anymore. The reason was that “this whole impeachment thing is hurting our brand,” explained Don King (Kenan Thompson), who took the phone from Redd’s Kanye West, as they were “having an emergency meeting of the Black wackadoos.”

Cecily Strong also popped up as Jeanine Pirro, trying to offer the president a pep talk and reminding him, “If you really want someone to go away, you know who to call.” Enter Schreiber.

“I told you, Mr. President, Ray Donovan’s a fictional character. I’m Liev Schreiber, the actor,” he said, to which Baldwin-as-Trump countered with an ask to be connected to John Wick. When Schreiber told him he, too, was fictional, the next request was for Liam Neeson.

Later in the episode, “Saturday Night Live” returned to the hot topic of Donald Trump’s potential impeachment in a special town hall sketch, in which the Democratic candidates got together on CNN to make cases for themselves while also making arguments against Trump.

“I’m America’s cool aunt — a fun aunt. I call that a funt,” Rudolph-as-Harris said. “The kind of funt that will give you weed but then arrest you for that weed. Can I win the presidency? Probably not, I don’t know. Can I successfully seduce a much younger man? You better funting believe it.”

When asked if she would still go past impeachment to prosecute Trump directly, Rudolph-as-Harris said “hell yeah” that was still her plan: “I’m a smooth-talking lady lawyer. I’m Rizzoli and I’m Isles. I’m a walking, talking TNT show. Don’t you want four more years of me dressing down our enemies like this, ‘You call that human rights, China? I call it human wrongs.'”

McKinnon-as-Warren noted that she hoped “you all enjoyed hot girl summer — because it’s school librarian fall. I have the energy of a mother of five boys who all play a different sport, let’s do this.” Meanwhile, David-as-Sanders said he was “so excited to be back and to ruin things a second time” before eventually promising “free college, free healthcare, free refills on any medium-sized soft drink.”

New cast member Chloe Fineman, known online for her impressions long before booking this gig, took on Marianne Williamson, appearing “via astral projection,” saying she wanted to trap Trump’s soul inside a crystal, “which I should note is also a yoni egg — so this election vote for magic.”

WHY LATE NIGHT COMEDY IS UNDER MORE SCRUTINY THAN EVER BEFORE

One exception was Harrelson’s Biden, who was in a bit of a hot seat, as questions about his involvement in the Ukraine scandal were floated. “I’m like plastic straws: I’ve been around forever, I’ve always worked, and now you’re mad at me?” he said.

After Harrelson-as-Biden told a story about an incident at a “segregated pool,” which he pointed out “just to put everyone on edge,” David-as-Sanders noted that people were worried he would be the one who was out of touch, but next to Biden, he looks like Drake.

And finally, during the “Inside the Beltway” sketch, Strong, Bryant, Harrelson and Thompson took on political pundits discussing whether or not impeachment was inevitable. Everyone seemed to think “there was something to this Ukraine story,” as Harrelson’s character put it — everyone except Thompson’s character Quincy Maddox, who declared “ain’t nothing going to happen.”

Admittedly this latter sketch got a bit derailed when a member of the crew came in to remove Bryant’s jacket for a quick change — while the camera was still on the wide shot of the group. This caused them all to break wildly and perhaps created an even bigger meme than they hoped “ain’t nothing going to happen” would become.

Watch “Inside the Beltway” below: