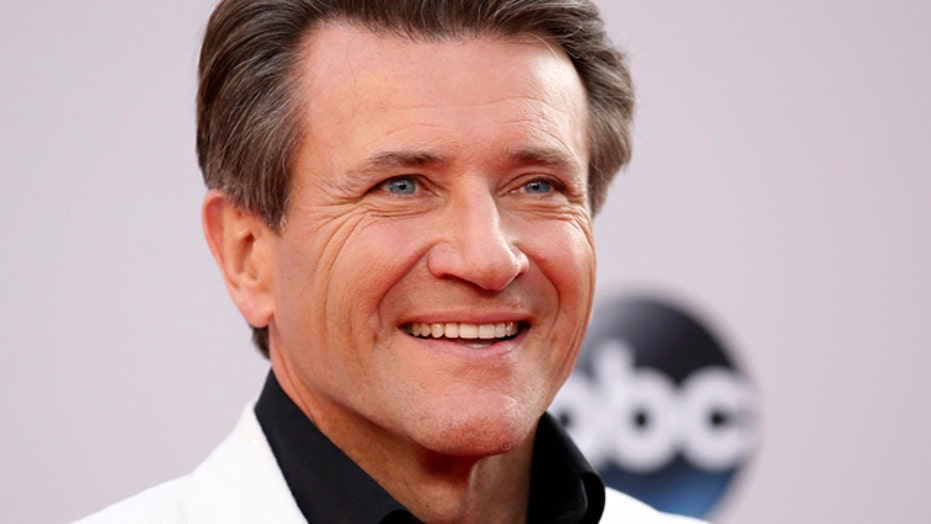 'Shark' star gets the boot

Robert Herjavec thrown to the sharks on 'DWTS'

“Shark Tank” star Robert Herjavec was eliminated from “Dancing with the Stars” on Tuesday night after rehearsal footage had revealed what had been rumored all season: that he’s head over dance heels for his partner Kym Johnson.

During the results show, viewers saw hidden camera video of Herjavec kissing Johnson and whispering to her, “I love you.”

Then—despite Herjavec pulling out all the stops and kissed Johnson during their sexy contemporary dance on Monday night—the two got the axe.

The wealthy entrepreneur, who received the low score this week of 62 out of 80 points over two dances, told FOX411 after the show, “I was very disappointed in the judges’ scores. I thought that for the last few weeks ... the scoring was a little harsh.”

At the same time, he added, “I’m shocked we got this far. It kind of sucks you in because the farther you get, the farther you want to go, but I’m really proud of where we’ve got to. It’s been a great experience.”

But of course, what “DWTS” fans REALLY want to know is where Herjavec and Johnson’s “showmance” is going.

And they evaded questions off-camera just as cleverly as they had on Tuesday’s ABC broadcast.

He told FOX411 his relationship with Kym was “kymplicated.”

The couple was bound for New York to be interviewed on “Good Morning America” Wednesday, but beyond that Johnson only said, “Of course we’re going to keep in touch.”

“Email me every now and then,” Herjavec joked.

Herjavec, who had told Johnson he’d give her a car if they won the mirror ball trophy, deadpanned that he’d do the next best thing: “We may stop at In-N-Out burger on the way to New York,” he said.

“That’s the sweetest thing ever. We’ll have to ask for something not on the menu,” Johnson laughed.

As she has all season, Johnson recalled, “We just got along from the moment we met. We both really enjoyed this whole experience together.”

Herjavec revealed that when he first saw the longtime “DWTS” pro, she told him, “Come here. I’ll hit you.”

Johnson said, “And it was easy from there.”

After a grueling eight weeks on “DWTS,” Herjavec said, “I plan to sleep. We’ve rehearsed every day for 74 days."

“Kym, I do have a life outside of dancing,” he teased.

He starts filming the next “Shark Tank” episodes in June, and revealed it only takes 17 days to shoot an entire season.

And he’ll go back to work “if I still have a company or employees.”

On Monday, Herjavec also told FOX411 he lost a lot of weight—but then gained it back in muscle.

Johnson cooed, “You look so thin and trim!”

He said, “It’s incredible. Dancing gets you in the best condition of your life. I can’t believe what it’s done to my body.”

Robert asked Johnson to come up with some kind of dance exercise routine going forward but admitted that after doing “DWTS,” he was “tired, exhausted, and sore."

WATCH: Four4Four: Is Black Widow from 'Avengers' a 'slut'?