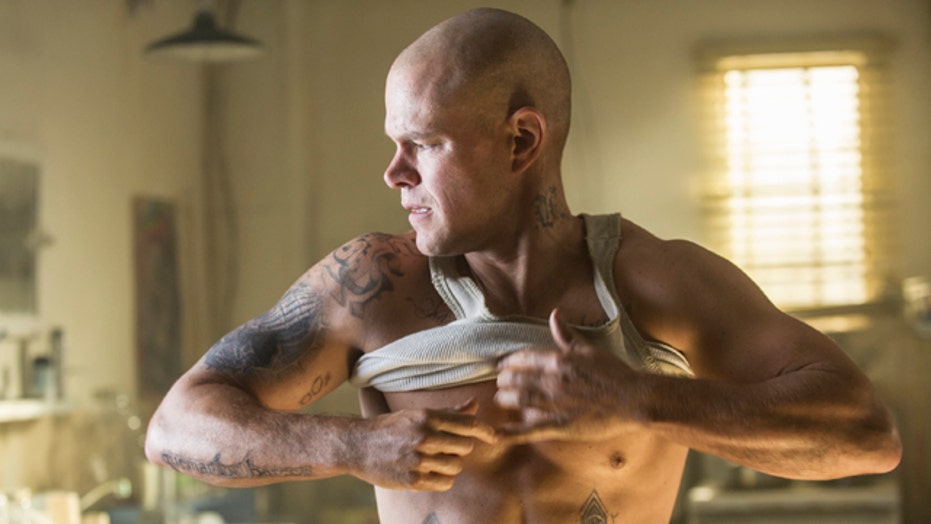 The best science fiction films typically hold a questioning mirror to our society, and director Neil Blomkamp’s “Elysium” tries to be a politically-charged allegory with the intention of showing the disparate differences in social classes, healthcare, immigration and government corruption but only intelligently touches on them as briefly as this sentence before becoming watered down into brainless nonsense.

The first half hour of “Elysium” is deceptively great. Blomkamp introduces the dual contrasting locations: the gritty, poisoned earth, home to the underprivileged and working class and, like the Greek concept, Elysium: the man-made utopia orbiting the planet, home to Earth’s richest and most “cultured” individuals. Blomkamp not only separates the two locations by their striking visual contrasts but also by language. The poor speak Spanish while the aristocratic Elysians speak French, and are nary without their wine or elegant properties. The Elysians are governed by an elite branch of politicians and the Earthlings are ruled by a robotic police state. This dichotomy between social-political realms is fascinating and within these first twenty minutes it appears Blomkamp has surpassed his brilliant feature film debut “District 9” with a new milestone in contemporary science fiction film.

But… and there’s a strong but here… the floor drops and with it all that excellent exposition and potential to be something special. Blomkamp quickly forfeits the intelligence, politics and the fascinating schism between the two worlds and rests solely on Matt Damon running, shooting and evading capture on Earth from an insane bounty hunter, played by the heavily accented, but incredibly engaging Sharlto Copley. Copley’s performance, though, is a real shot of adrenaline; His manic, often funny, and sadistic assassin is surprisingly the only character with any pulse.

What does work in “Elysium” is Blomkamp’s indelible real-world visual style. Like “District 9,” one could almost touch and taste the dirt, grit and grime of our planet. Add to that the seemingly natural blend of robotics and CGI spaceships which creates a striking yet identifiable world. Between this and “District 9,” Blomkamp has proven he is a technical master when it comes to science fiction filmmaking. Visually, he goes for realism to lure the audience, but unfortunately that doesn’t extend to the writing.

Matt Damon is Max, a character as nondescript as they come. What little is known of him really has no impact on the overall film, nor does his character have much of an arc. He’s just a guy who tries to make the best of a very bad situation.  Besides being an ex-car thief-turned-assembly line worker, all we learn about him is that as a young boy he and his little girlfriend Frey would dreamily look to Elysium and promise to go there one day. When, as an adult, Max is exposed to lethal doses of radiation, he becomes hellbent on getting to Elysium with his now-distant friend Frey (Alice Braga) and her dying daughter to use the Elysians’ personal medical pods, which cure any and all ailments (even death). Since poor Earthlings are executed or deported upon entering Elysium, this makes for a tricky situation. Damon does the best he can with the role, shaving his head and implanting some kind of robotics into his head which make him stronger than normal.

Then there’s Jodie Foster. Foster plays Delacourt, Elysium’s power-hungry, pantsuit-clad Secretary of Defense, who concocts a plan to override Elysium’s computer systems allowing her to throw a coup and take command of the city. Unfortunately for her, the override code becomes implanted in Max, causing her to go a little insane trying to stop him, thus heaping chaos upon Elysium. By definition this should be such a fun character for Foster, or any actress to play, but Ms. Foster single-handedly gives one of the worst performances of the year. She tries to sound “evil” by using some stilted accent which comes across as the greatest effort on her part. Each line is delivered so awkwardly and poorly it is laughably distracting. The question is why would Blomkamp allow this? Foster is an acting legend. She’s a multi-Oscar winner. While she looks fantastic in the role, she is seriously miscast or just mis-directed. If Jodie Foster was allowed to just be Jodie Foster in this role, the effect would have been incredible. C'est la vie on Elysium.

People expecting another “District 9” or who expect a little more substance from their science fiction films will most likely be disappointed by “Elysium,” but those who like their videogame-style sci-fi shoot-em-ups will have no problem here. If Blomkamp created a stronger balance between those two approaches, which at first appears he is doing, then perhaps “Elysium” would be far greater.