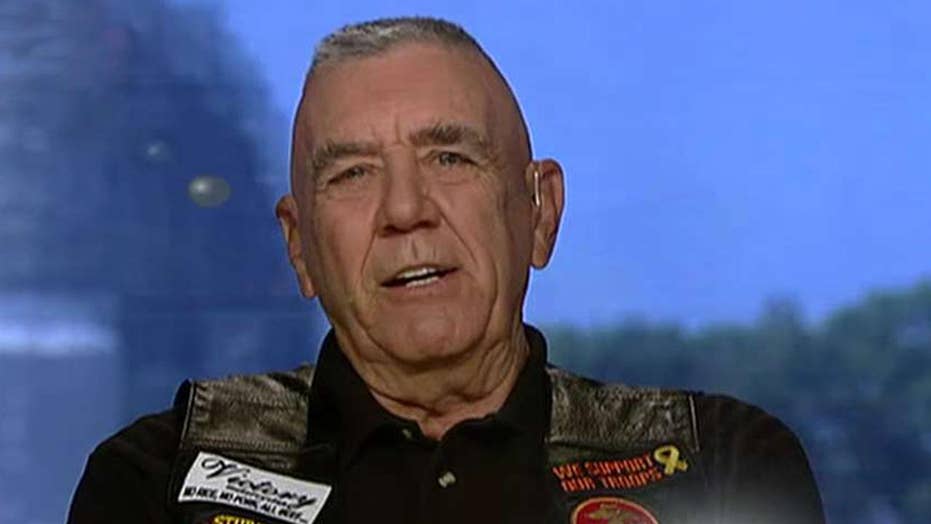 From training new Marines as a sadistic drill instructor to leading a bucket of toy soldiers on a mission to move to their owner's new home, the late actor R. Lee Ermey has left his mark on a variety of shows. In fact, he raked in more than 60 credits in film and television over his 30-year career in the industry.

Fans of the actor are remembering his iconic roles after his death on April 15 at the age of 74.

Ermey slowly transformed into an actor after serving as a technical adviser on films such as "Apocalypse Now," "The Boys in Company C" and yes, even "Full Metal Jacket."

No one could play the role as Gunnery Sergeant Hartman better than him -- a Marine Corps veteran who served for 11 years, including 14 months in Vietnam. The film's director Stanley Kubrick offered Ermey the spot after seeing a demo tape of him railing at extras while tennis balls flew at him.

"Lee Ermey ... would spend every spare second with the dialogue coach, and he always knew his lines," Kubrick told Rolling Stone in 1987. "I suppose Lee averaged eight or nine takes. He sometimes did it in three. Because he was prepared."

The breakout role earned him a Best Supporting Actor nomination at the Golden Globes, marking the beginning of what turned out to be an impressive career. Here's a look at some of his most memorable roles on screen.

Ermey was best known for his role in "Full Metal Jacket," and it originally wasn't even his. He had been brought on as a technical consultant for the 1987 film, but he had his eyes on the role of the brutal gunnery sergeant and filmed his own audition tape of him yelling out insults while tennis balls flew at him. An impressed  Kubrick gave him the role.

Kubrick told Rolling Stone that 50 percent of Ermey's dialogue in the film was his own.

"In the course of hiring the marine recruits, we interviewed hundreds of guys. We lined them all up and did an improvisation of the first meeting with the drill instructor. They didn't know what he was going to say, and we could see how they reacted. Lee came up with, I don't know, 150 pages of insults," Kubrick said.

Ermey went on to voice the little green army man Sarge in the "Toy Story" films. Sarge is loyal to Woody and completes missions to spy on Andy's birthday presents, which the toy story gang sees as a threat. He's often spotted with a pair of binoculars in his hands, scoping out various scenes to instruct the toys how to proceed.

"Sarge, voiced by the late R. Lee Ermey, is based upon his character of Gunnery Sergeant Hartman from Full Metal Jacket," according to Pixar's Wiki page.

He also played track and field coach and Nike co-founder Bill Bowerman in "Prefontaine" in 1997, starring alongside Jared Leto who played Steve Prefontaine.

The New York Times called Bowerman's storyline the film's "most interesting sidebar" in its 1997 review.

"The coach experimented with his waffle iron ... and helped devise the Nike running shoe," the newspaper explained.

Ermey had several military roles throughout his career, including his 1991 role as General Kramer in "Toy Soldiers."

"'Toy Soldiers' is a crisp, suspenseful thriller well tailored to the tastes of teen-age audiences, who will doubtless appreciate such touches as the equivalent microchips found in one student's radio-contrilled airplane and the chief terrorist's detonator, which is rigged to blow up the entire school," The New York Times wrote in a 1991 review.

"The mayor [is] a slick country-club type, who lectures against rabble-rousing outsiders," famed film critic Roger Ebert wrote in his 1988 review of the film. "More than any other film I’ve seen, this one gets inside the passion of race relations in America."

Ermey joined Brad Pitt, Morgan Freeman, Gwyneth Paltrow, Kevin Spacey, among other stars in this 1995 crime drama. He played a police captain in the movie.

"An intensely claustrophobic, gut-wrenching thriller about two policemen’s desperate efforts to stop an ingenious serial killer whose work is inspired by the seven deadly sins, this weirdly off-kilter suspenser goes well beyond the usual police procedural or killer-on-a-rampage yarn," Variety reported in 1994.

He was also known as Sheriff Hoyt in "The Texas Chainsaw Massacre," and according to Ermey, it was one of the best characters he's ever played.

“I love the character,” Ermey told Cinema Blend in 2006. “The beautiful thing about Sheriff Hoyt is the simple fact that he’s a sexually perverted homicidal maniac. How do you go over the top with this guy? You can just go crazy with him. Basically, I was allowed to do exactly that. Every character I’ve ever played, I always try to take him right to the edge and not allow him to fall over, but directors have a tendency to pull me back a little bit. I hate to hear ‘Less is more.’ It’s a crock of crap. I think more is more and with this character I was allowed to go just completely berserk, and that’s what I love to do.”

“The beautiful thing about Sheriff Hoyt is the simple fact that he’s a sexually perverted homicidal maniac. How do you go over the top with this guy? "

Hoyt is the "fatherly figure of the deranged family," FirstShowing.net reported at the time. "Ermey takes 'The Beginning' to a sick and twisted high-point with his humorous lines and deranged mind."