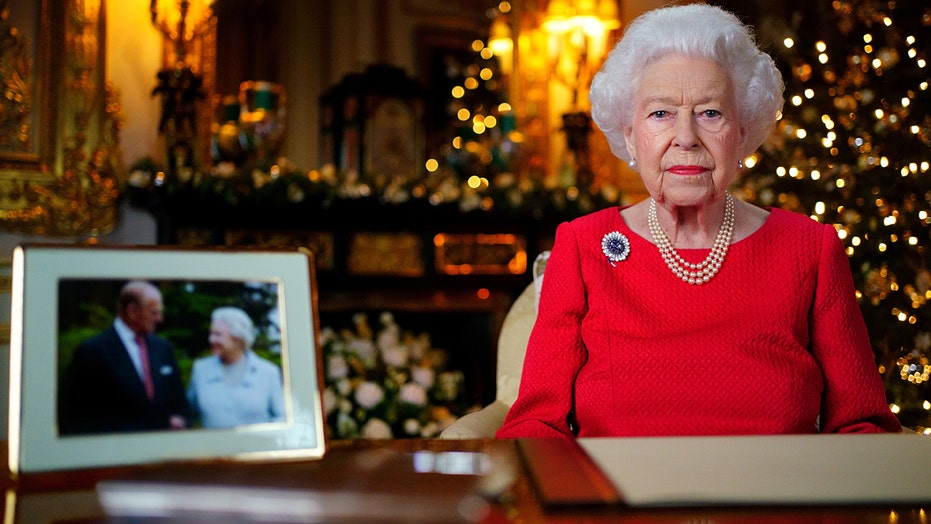 This holiday season has been a somber one for Queen Elizabeth II.

For the first time in more than 70 years, the reigning monarch celebrated Christmas without her husband Prince Philip.

The Duke of Edinburgh passed away in April at age 99.

"Christmas was a bit of a struggle for the queen without Prince Philip by her side," a palace source told Us Weekly on Tuesday. "And not being able to spend with her whole family [didn’t help]."

Queen Elizabeth II records her annual Christmas broadcast in the White Drawing Room at Windsor Castle on December 23, 2021, in Windsor, England. The photograph on the desk is of The Queen and the Duke of Edinburgh, taken in 2007 at Broadlands, Hampshire, to mark their Diamond Wedding Anniversary. (Photo by Victoria Jones - Pool/Getty Images)

While the 95-year-old was away from her extended family due to rising coronavirus cases, the insider said her grandson Prince William "liaised" with Prince Charles, who visited his mother on Christmas. Her daughter Princess Anne isolated through the holiday, but she organized a group Zoom call with the monarch which "brightened her day."

William’s wife, Kate Middleton, was at their countryside home, Anmer Hall, with their three children.

"Obviously, the Cambridges were disappointed not to be spending the day with the queen, but thanks to modern technology, they video called her first thing in the morning to wish her a Merry Christmas," the insider told the outlet.

"And the kids excitedly told their great-grandmother about their gifts," the source added.

In this Aug. 1951 file photo, Britain's Queen Elizabeth II, then Princess Elizabeth, stands with her husband Prince Philip, the Duke of Edinburgh, and their children Prince Charles and Princess Anne at Clarence House, the royal couple's London residence.  (AP Photo/Eddie Worth)

During her annual Christmas Day message, Elizabeth shared the pain she felt after the death of her husband as she encouraged people everywhere to celebrate with friends and family, despite the grief caused by the ongoing pandemic.

Saying she understood the difficulty of spending the holiday season "with one familiar laugh missing," the monarch delivered her address beside a framed photograph of her arm-in-arm with her beloved husband. On her right shoulder was the same sapphire chrysanthemum brooch she wore in the photo — a glittering statement pin that she also wore as a newlywed.

"Although it’s a time of great happiness and good cheer for many, Christmas can be hard for those who have lost loved ones," the queen said in the prerecorded message broadcast when many British families were enjoying their traditional Christmas dinner. "This year, especially, I understand why.’’

Despite her loss, the queen said her family was a "source of great happiness," noting that she had welcomed four great-grandchildren this year.

Prince Philip, Duke of Edinburgh and Queen Elizabeth II’s husband of 73 years, died in April at Windsor Castle. He was 99.  (AP Photo/Matt Dunham)

"While COVID again means we can’t celebrate quite as we may have wished, we can still enjoy the many happy traditions, be it the singing of carols — as long as the tune is well known — decorating the tree, giving and receiving presents, or watching a favorite film where we already know the ending," she said. "It’s no surprise that families so often treasure their Christmas routines."

As the highly transmissible omicron coronavirus variant spreads rapidly across the U.K., the queen decided not to spend Christmas at Sandringham, the royal estate in eastern England where she traditionally spends the festive season with family. Instead, she spent the holidays at Windsor Castle, west of London, where she has remained throughout most of the pandemic.

Buckingham Palace announced this week that Elizabeth agreed to stage a service of thanksgiving for Philip's life in the spring.

In closing her Christmas message, the queen noted that the holiday is often seen as a time for children. But, she said, this is "only half the story."

"Perhaps it’s truer to say that Christmas can speak to the child within us all. Adults, when weighed down with worries, sometimes fail to see the joy in simple things where children do not. And for me and my family, even with one familiar laugh missing this year, there will be joy in Christmas."