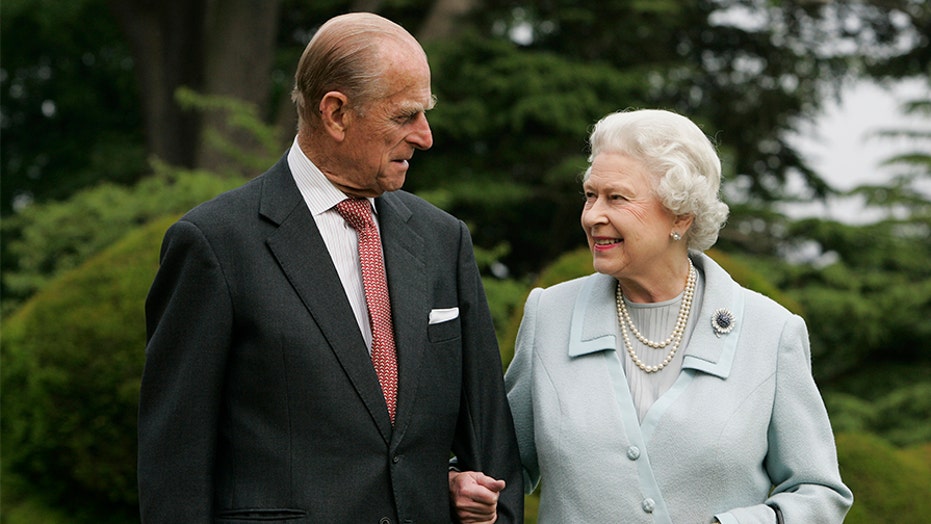 There certainly won’t be fuss. Count on that.

When Britain’s Prince Philip reaches the grand age of 99 on Wednesday, he will spend it quietly and in much the same way he’s spent most of his adult life: beside Queen Elizabeth II.

The stalwart consort plans a quiet lunch at Windsor Castle, where the senior royals have been sheltering due to the COVID-19 pandemic. Some family members may call but the palace is saying little more than that. Britain is still under coronavirus restrictions that limit the size of gatherings and Philip and the 94-year-old queen are well into the over-65 age group most vulnerable to coronavirus.

The last year hasn’t been an easy one for Philip, who retired from public life in 2017 after 65 years of supporting the queen.

In this image, made available November 18, 2007, HM The Queen Elizabeth II and Prince Philip, The Duke of Edinburgh re-visit Broadlands, to mark their Diamond Wedding Anniversary on November 20. The royals spent their wedding night at Broadlands in Hampshire in November 1947, the former home of Prince Philip's uncle, Earl Mountbatten. (Photo by Tim Graham/Getty Images)

QUEEN ELIZABETH PICTURED FOR THE FIRST TIME OUTSIDE SINCE CORONAVIRUS QUARANTINE

In November, his second son, 60-year-old Prince Andrew, was forced to step away from all royal public duties because of concerns about his links to Jeffrey Epstein, the convicted American sex offender who died in a New York prison. Two months later, Prince Harry, Philip’s grandson, and his wife, the former Meghan Markle, caused further controversy when they announced they were stepping away from royal duties so they could seek financial independence in North America.

Wednesday’s birthday is just the latest milestone for the man born Prince Philip of Greece and Denmark on June 10, 1921, amid the upheaval that led to a military coup that overthrew his uncle, King Constantine of Greece, a few months later.

His parents were Princess Alice of Battenberg, a great-granddaughter of Queen Victoria, and Prince Andrew of Greece.

England’s King George V sent a Royal Navy cruiser to evacuate Philip’s family, and the infant prince was whisked to safety in a cot made from an orange box. The young Philip went to school in Germany and Britain and rarely saw his parents when he was growing up.

In 1939, Philip joined the British military as a cadet at the Royal Naval College, Dartmouth. It was there he was asked to escort then-Princess Elizabeth and her sister on a visit to the facility.

PRINCE WILLIAM HELPED ARCHBISHOP OF CANTERBURY ‘STRUGGLING’ WITH DEPRESSION: ‘I AM DEEPLY GRATEFUL’

The first official picture after the announcement of the engagement of Princess Elizabeth and Lieutenant Philip Mountbatten, the former Prince Philip of Greece, at Buckingham Palace, circa 1947. The princess is wearing her engagement ring for the first time.  (Getty)

QUEEN ELIZABETH ONCE AVOIDED A CONTROVERSIAL PALACE GUEST BY HIDING IN A BUSH, FILMMAKER SAYS

He served in the Royal Navy throughout World War II, winning mention in dispatches for service aboard the battleship HMS Valiant at Cape Matapan, on Greece’s Peloponnesian peninsula. Philip rose to the rank of commander, but his career ended when his wife became Queen Elizabeth II after the death of her father, King George VI, in 1952.

Philip had married the future queen at Westminster Abbey in 1947 when she was 21 and he was 26. He renounced his Greek title and King George VI made him the Duke of Edinburgh. At Elizabeth’s coronation in 1953, Philip swore to be his wife’s “liege man of life and limb,” and he settled into a life supporting the queen.

Together they had four children — Charles, the Prince of Wales and heir to the throne, Anne, Andrew and Edward; eight grandchildren, including Prince William, second-in-line to the throne and Harry; and eight great-grandchildren.

At the time he retired from public life, Philip was the patron, president or a member of more than 780 organizations, including many charities. He had given 5,496 speeches, written 14 books and gone on 637 solo visits overseas, in addition to hundreds of trips accompanying the queen.

“I think probably a lot of people don’t know what he’s done because he doesn’t like adulation,” said Ingrid Seward, editor of Majesty Magazine. “He doesn’t like fame. He just gets on with it.’’

To many, Philip has been the man, a step or two behind the queen, who told off-color jokes and occasionally made headlines for being a tad inappropriate.

He is not without controversy. Newcomers to the House of Windsor, such as the late Princess Diana and Prince Andrew’s ex-wife, the Duchess of York, Sarah Ferguson, have reportedly clashed with him.

But Seward said such disagreements arose out of Philip’s sense of duty to the monarchy as an institution.

He is, after all, a man who gave up his own independence and a promising naval career to marry the future queen at a time the royal family was still recovering from the abdication of King Edward VIII a decade earlier. Elizabeth’s father only became king because his older brother, later known as the Duke of Windsor, refused to rule without the American divorcee who became his wife — a move some saw as shirking his duty to the nation.

But Seward said Philip’s contributions to the monarchy have been profound. He’s been credited with modernizing the House of Windsor behind the scenes, making the royal estates profitable and being a redoubtable supporter of the monarch.

In this June, 16, 2011 file photo Britain's Queen Elizabeth II with Prince Philip arrive by horse-drawn carriage in the parade ring on the third day, traditionally known as Ladies Day, of the Royal Ascot horse race meeting at Ascot, England. (The Associated Press)

“I think he shaped the queen’s reign very subtly, and people don’t really know what he’s done,″ she said. ``So he’s managed to do things without being noticed, which is what he wants.”