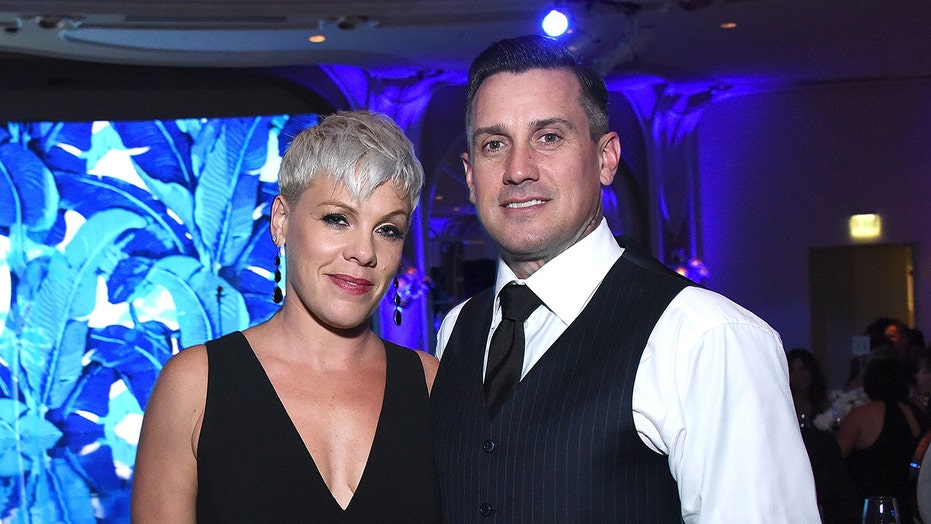 Pink’s husband Carey Hart hit back at fans who criticized the singer for wearing a shirt in support of Democratic presidential nominee Joe Biden and his running mate Sen. Kamala Harris.

On Sunday, the “So What” singer showed off a Biden-Harris T-shirt she was wearing while on a motorcycle ride.

Pink, 41, captioned the selfie with the hashtag “#JesusMaryAndJosephICannotWaitToVote.”

The pop star has been vocal in the past about her disdain toward President Trump, so many of her followers weren't surprised by her support and praised her for it.

Others, however, slammed Pink for her political views, writing that they planned to unfollow her, and told her to stay out of politics.

The “Just Like Fire” singer usually isn’t afraid to hit back at commenters, but this time she let her husband take the reins.

"Karen” is a pejorative term that has come to prominence to label a demanding, middle-aged White woman who displays a sense of overbearing entitlement in various societal confrontations.

PINK SLAMS 'ALL LIVES MATTER' CRITICS IN THE COMMENTS OF HER PROTEST PHOTO: 'EDUCATE YOURSELF'

Another commenter said Democrats have “destroyed Black lives for decades.” They also said Biden would “take your husband’s guns.”

Hart replied with a lengthy rebuttal.

“I’ll try to keep this short,” he said. "Yes Biden has been in politics for 47 years. Reason I am voting for him is because I ‘hope’ he puts together a great team that will do positive things. And that is what most of Trump’s high-profile early [supporters were] planning for him to do. But his narcissism kicked in and away he went.”

In regard to his stance on gun control, Hart said, “[The Second Amendment] is a constitutional right, and no two people (Biden and Beto) can take that away. I for one think there needs to be stricter gun laws, ‘cause guess what? That won’t affect me because I’m a law-abiding citizen.”

The athlete also criticized Trump’s response to the military and veterans.

“Military? Cheeto said that military were losers, made a stink about visiting a military cemetery and called a senator POW survivor [the late Sen. John McCain] a ‘loser’ for getting capture,” he wrote. “All while he dodged the draft due to shin splints {a bone spur]. If Trump loves the military vets so much, why has he done next to nothing for them in the last 3.5 years?”

Hart then addressed his stance on Black Lives Matter and the calls to defund the police.

“I for one don’t want to defund the police. But there needs to be a radical recalibration of how they do things,” he said. “Good on Trump if he did raise [salaries] for [minorities]. I must have missed that move, but good on him if he did.”

Hart concluded: “To wrap up, all those negatives for his one right doesn’t get my vote. I’m sure the next dig will be some ‘Creepy Joe’ bulls--t.” Tell you what, I’d rather Joe smell my daughter’s hair than Trump to grab her by the p---y. One thing you should know about me: Time doesn’t heal all. And I remember all the f--ked up and [divisive] things Trump has done. And that is why he won’t get my vote. Fact check anything I said.”

One commenter said they were getting support as a veteran through initiatives Trump was responsible for.

Hart questioned if the support was for “regional or party based states," citing his work with his motorcycle charity Good Ride in support of veterans.

In another comment, Hart said he identifies “more as a Republican, but their morals are bulls--t,” adding, “I can’t back a divisive narcissist.”

Pink didn’t directly respond to comments, but she retweeted an article detailing Hart’s response. “Yeah! Exactly what he said!” she wrote.

The pop star has been a vocal critic of Trump and White supremacy as well as a supporter of the Black Lives Matter movement and patriotism.

Pink went on to say that some "worship the confederate flag, which is not our flag and it never will be."

"Or you're a hypocrite that doesn't actually understand the meaning of patriotism or what it means to be an American," she said with a shrug. "Truth.”

The star also made her position clear by repeatedly shutting down All Lives Matter supporters in the comments of her Instagram posts.

Pink and Hart have both attended Black Lives Matter protests in the past few months.