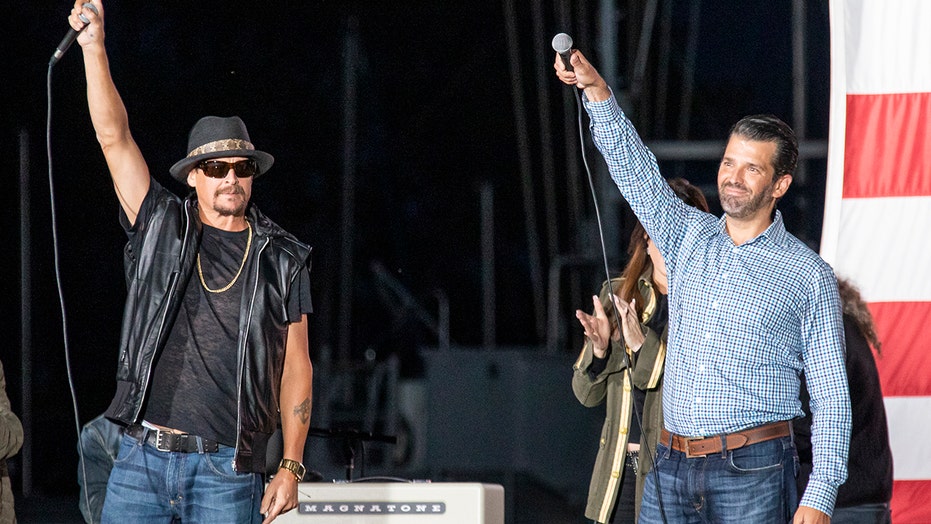 Musician Kid Rock joined Donald Trump Jr. at a campaign rally in Detroit on Monday where he encouraged people to mobilize their friends and family to vote in the upcoming election.

Following an impassioned speech made by Trump Jr. and his girlfriend, Kimberly Guilfoyle, the duo introduced Kid Rock to the stage, where he opened with some fiery words about Donald Trump’s presidency and what he believes is its need to continue.

With that, Trump Jr. noted it’s not enough to simply get out and vote in this election. Rock added that, although he believed “90%” of the crowd in attendance was registered to vote, he personally knows several people who aren’t. He encouraged everyone to encourage their friends, family, coworkers and anyone else who may not be involved in the democratic process to get out and get involved.

Rock then began his 20-minute set that included performances of his hit songs “So Hott,” “Cowboy,” “All Summer Long” and “Born Free,” according to the Detroit Free Press.

The outlet notes that Rock took to Facebook shortly before taking the stage to announce that he’s been dealing with neck pain for years. He shared an image of himself at a doctor’s office along with a caption about how important showing up to the rally was for him.

“I have been dealing with neck issues for years (from performing like I do for the past 30 years) and spent the morning at the Dr’s office getting 2 Steroid shots, one in my a-- and the other in my neck, etc, etc,” he explained.

“Would make sense to cancel my appearance, but NO WAY! I will be there and will give it everything I have this evening,” the singer continued. “That is how important getting POTUS reelected is too me and I could care less about the continuous attacks from the left-wing media, etc, that have been going on for over 4 years now. It's the reason I have turned down countless interviews and TV appearances as I refuse to be their click bait.”