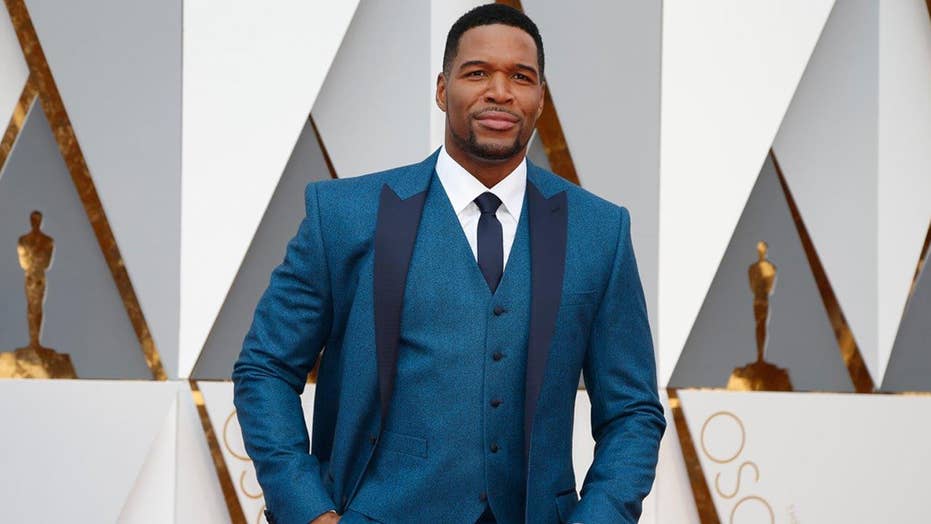 Fox411: A look back at the TV host's drama-filled year

Michael Strahan's sudden departure from “Live” was one of the biggest stories of 2016.

Already forgotten the nitty-gritty details of the scandal? Relive the year in Strahan.

January
In January, it was revealed Michael Strahan’s 27-year-old girlfriend had a criminal past. According to police records, Kayla Quick was arrested twice: at 14 for disorderly conduct, and in 2005 for grand theft after allegedly breaking into her grandma’s home and stealing $6,000 worth of jewels.

March
She may have a criminal record, but Strahan’s girlfriend can rock a bikini. The pair was spotted splashing around in St. Barts in March. The couple was inseparable while sipping cocktails.

April
Let the drama begin. It all started when Strahan released a statement that he would be leaving “Live” and joining “Good Morning America” full-time in September. Prior to the move, he appeared frequently on the morning show as a correspondent. However, the scandal could have been defused if ABC had just told his “Live” co-host, Kelly Ripa, about the shake-up. The morning after the announcement, Ripa was absent from “Live.”

“Kelly sees this as the ultimate betrayal,” a source told Page Six at the time. Another source confirmed that Ripa was having a “total meltdown” after being blindsided by the news.

In the days following the announcement, more and more information about Ripa and Strahan’s off-screen relationship was revealed. “They could not stand each other, and whenever they communicated off-camera, it was always through their reps,” an insider told us of the pair, who seemed to have the perfect on-air chemistry.

Strahan bailed on a charity gala he was scheduled to co-host, while Ripa was spotted leaving her apartment clutching a copy of the book “David and Goliath.” ABC and Strahan claimed that Ripa had already planned to take time off to celebrate her 20th anniversary with husband Mark Consuelos; however, Ripa sent an email to staff thanking them for giving her time to “process” the new information.

Ripa returned to “Live” on April 26 and openly discussed what had been going on behind the scenes.

“I am fairly certain that there are trained professional snipers with tranquilizer darts in case I drift too far off message,” she joked. “I needed a couple days to gather my thoughts. After 26 years with this company, I earned the right.” She said that over the past couple days, the situation opened doors to better communication, consideration and respect. She congratulated Strahan on his new position, saying she was “thrilled” and “proud” of him. That same day, ABC revealed Strahan would be leaving the show four months earlier than expected, making his last day May 13.

The dramatic week ended with an on-air dig from Ripa about his divorce.

May
Kelly and Michael continued to co-exist at the office and the pair even nabbed a Daytime Emmy for their show, but neither of them showed up at the ceremony in Los Angeles to claim the award.

On the bright side, things seemed to be going well for Strahan and his criminal girlfriend, who were spotted out on a date during the aftermath of the scandal.

Strahan co-hosted his last show on May 13 and after the show, sources told us that Ripa and Strahan had a private reconciliation. “It was all very positive,” the source told us of their talk, but even as they made up, the mood of the staff was “celebratory” after he left. Almost immediately, pictures of Strahan were taken down and replaced with solo shots of Ripa. One source compared it to “the first day of school.”

Strahan was seen toasting his departure with his new co-host Robin Roberts and things seemed to be calming down. He remained tight-lipped about everything that happened, not granting interviews to the press.

“I get the desire to move people to other places where they are needed. I get it,” Ripa said in May. “However, what nobody considered is there’s a whole other group of people that it really impacts, because we have to now find another great person. Which is fun but challenging.”

At the end of May, speculation about who would take over for Strahan was all anyone could talk about. Names from Anderson Cooper to Fred Savage were floating around.

June
In June, Strahan finally broke his silence. “I really haven’t missed it,” he told Chelsea Handler in his first interview post-“Live.” “But I loved it. Don’t get me wrong. I loved it. When you get a break, sometimes you kind of go, ‘Wow, I kind of needed it.’ I needed a break.”

His arrival at “Good Morning America” sparked a whole new set of rumors at ABC. Sources said that Lara Spencer might be leaving and that George Stephanopoulos would focus more on politics while Strahan took a lead anchor position.

July
In the beginning of July, it was revealed that part of Strahan’s deal at “GMA” forced him to drop any endorsements. ABC News staffers are forbidden from endorsement deals, which meant he was no longer able to promote things like Subway, Pizza Hut, Metamucil or anything else he’d done in the past. It also set in that he would be starting to cover more serious news and Strahan was a little bit nervous about the change.

“His background is football, not journalism,” a source told Page Six, adding that they would be easing him into the hard-hitting news.

August
By August, the dust had settled and the biggest news was still trying to find a replacement for Strahan on “Live.”

Just when things seemed to have blown over, Strahan did an interview with People and admitted he and Ripa were no longer friends. “At one point I think we were friends. I don’t know what happened at the end,” he said. “I wasn’t surprised by her reaction at all, but I can’t control somebody else’s actions.”

He was supposed to be on the cover of that week’s People magazine, but was booted to make room for Brangelina’s split.

ABC execs were less than thrilled about Strahan’s interview with the magazine. “They thought he was over it, and here he is rehashing it. It’s sort of obvious they wouldn’t be happy … Everyone thought he’d moved on,” a source told us.

By September, Ripa had gotten a promotion to executive producer on “Live.” We were told that Bob Iger smoothed things over by giving Ripa the new title.

October
Vanity Fair released their list of people who fell from grace in 2016 and Ben Sherwood, the president of Disney/ABC television group, got a special shout-out for how he handled Strahan’s exit from the show and the fact that Ripa was blindsided by the news.

November
Leave it to Andy Cohen to bring up sore subjects. Cohen, a longtime friend of Ripa, wrote in his new book that his remarks during the “Live” scandal hurt Strahan’s feelings. At the time, Cohen said he didn’t understand how Strahan could leave “the greatest job in TV to be one of five people” on “Good Morning America.”

Apparently in May, Cohen ran into Strahan. “Going into dinner I walked right into Michael Strahan, who said he can’t believe I did him that way, that he was so surprised I joined the pileup,” Cohen wrote, adding that they talked and “hugged it out” that night.

December
For now, it seems like the “Live” nightmare is finally over. Both parties seem to have moved on, but who knows what 2017 may hold.