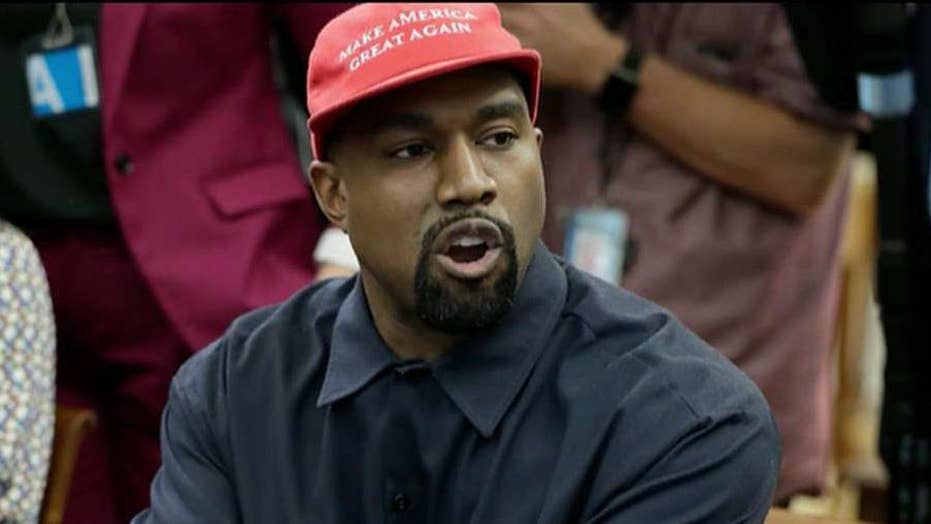 'Fox &amp; Friends' viewers react to Kanye West explaining what it's like to get criticized as a Trump supporter.

Rapper Kanye West blasted the media during his interview with David Letterman that aired on Netflix on Friday night, claiming Americans are "completely bullied" by the press to "think certain things."

During the lengthy discussion on Letterman's show -- which is titled "My Next Guest Needs No Introduction" -- West also spoke about his bipolar disorder, describing his condition as akin to having a "strained brain," adding, "We're all dealing with mental health."

"We're pushed into it. We're driven crazy," West said. "We forget who we even are. We're driven to like a certain type of career that we're supposed to be. We're, like, completely bullied by the media, both celebrities and the masses, to think certain things and have group thought.

PRESIDENT TRUMP PRAISES KANYE WEST'S WORDS AT WHITE HOUSE: 'THAT WAS QUITE SOMETHING'

"Like, 'Oh yeah, damn right we're going crazy'," West continued. "I'm the most famous person with [bipolar disorder] and I've only experienced it for two years. What about people that's been experiencing this since they were two?"

The rapper superstar also weighed in on the #MeToo movement against sexual misconduct, claiming there was a "fear" of having an honest discussion about the topic. That part of the conversation quickly pivoted into politics and his support for President Trump.

West said several people he works with also voted for Trump but said they were "scared for life to tell anyone."

"Did you vote for Trump?" Letterman asked.

"Then you don't have a say in this," Letterman shot back.

The Grammy-winning artist later told the former "Late Show" host that Trump voters are being treated "like enemies of America."

"Have you ever been beaten up in high school for wearing the wrong hat?" West asked Letterman. "Liberals bully people who are Trump supporters. It's not just calm. You can't just go and wear the hat."

West, 41, rocked the entertainment and political worlds when he took to Twitter wearing a MAGA hat. Then last October he met President Trump in the Oval Office.