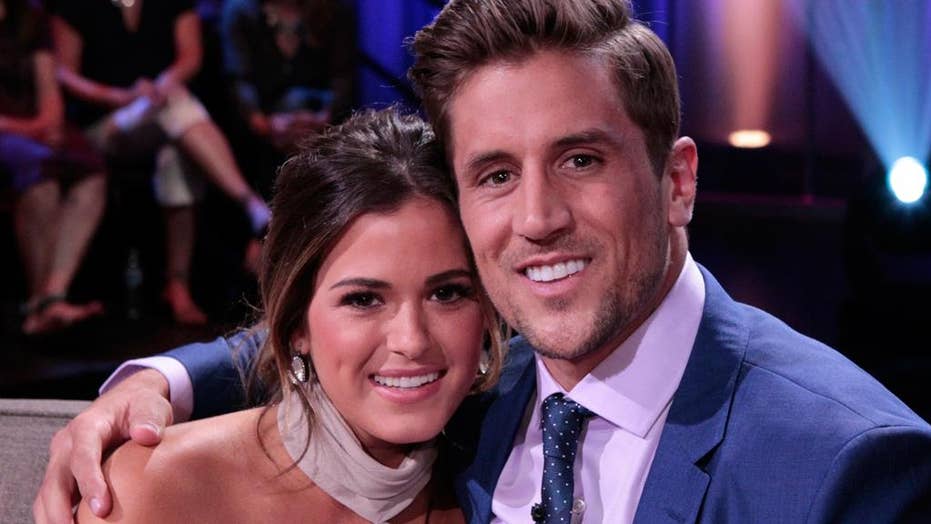 Jordan Rodgers' ex: He cheated on me!

Jordan Rodgers is getting called out yet again by his ex, Brittany Farrar, and this time his former girlfriend is attempting to back up her allegations of cheating with some actual receipts.

Farrar took to Instagram on Thursday with a video showing a purchase order for a large bouquet of roses allegedly purchased by Rodgers for "the girl he cheated on me with in Louisiana," she wrote in the caption.

According to Farrar, Rodgers met the woman she claims he had an affair with while shooting a scene in "Pitch Perfect 2."

"He was deep in the background pretending to be one of the Green Bay Packers- the closest he's ever been to making an NFL team," Farrar quipped.

WATCH: Jordan Rodgers Accused of Cheating, Wanting Fame by Trainer Claiming to Be His Ex

The message that appears on the receipt, which was to be delivered with the flowers, appears to read, "Happy Birthday to my Favorite Bella. Miss you. Can't Wait to To See That Beautiful Smile Again. From, Your Favorite Football Player Wanna Be Actor."

The Barden Bellas, of course, are the female a cappella group featured in the "Pitch Perfect" franchise. However, Farrar does not hint at the name of the woman who may have been involved with Rodgers at the time.

"Jordan, you dragged our relationship into the spotlight, and then challenged my honesty and character," Farrar said, referring to Jordan's previous denial of her cheating allegations. "If you weren't ready to be truthful about your life then you shouldn't have gone on a reality show. And if you don't like having your integrity questioned, you shouldn't have lied about someone who's parents always taught her to stand up for herself."

In a following post, Farrar shared a lengthy open letter about Rodgers calling her a liar, and claiming that he denigrated her good name.

"With the power of a press tour, his lies reached our hometown," Farrar wrote. "His choice has become other people's consequences. So if I don't have a choice in whether people back home are talking about me, then I might as well have my voice in this."

"Unlike Jordan, I'm not going to sell stories to magazines," she continued. "Instead, I'm posting right here. Because to me truth is not about fame."

Sarah also fired shots at her ex in the caption to her statement, sharing, "After our breakup, I was surprised to find out what a prolific liar and cheater #JordanRodgers was during our entire 3 1/2 year-relationship. But what has surprised me even more is how he has carelessly bashed and lied about me in public. I guess he thought I wouldn't stand up for myself. #HeWasWrong"

The public battle between Farrar and Rodgers began in May when the former footballer's season of "The Bachelorette" kicked off. Farrar took to Instagram to share her initial accusations of infidelity, writing, "Riding the bench doesn't get in the way of a relationship, but cheating does. #yourpitchisntperfect @jrodgers11 #alwayswantedtobefamous #dreamscometrue #tuneinnextweekformoreBS."

Rodgers, who won his season of the "Bachelorette" and is now engaged to JoJo Fletcher, has steadfastly denied the accusations.