Jimmy Kimmel accused President Trump of lying about the ABC late-night host waiting outside his studio on Hollywood Boulevard to eagerly open Trump’s car door upon his arrival.

Last month, Trump mocked the liberal late-night host during a rally in South Carolina calling him “terrible” and telling a story about how Kimmel treated him prior to the election.

“Jimmy Kimmel would meet me, before the election. I’m telling you. True story. I don’t even think he’ll deny it… I’d go to his studio… He would stand outside on the sidewalk waiting for me,” Trump said. “He’s standing out on Hollywood Boulevard… I wasn’t president. I was, like, a guy. A guy with potential.”

Trump then declared that Kimmel’s staffers informed him that not everyone received such special treatment from the comedian. However, Kimmel returned from a two-week vacation on Monday night and addressed the situation.

“You know, it’s a funny thing. We all know, like even the people who like the president know he makes things up, but still, it’s weird to hear him tell a lie that’s specifically involves you,” Kimmel said. “For the record, not only was I not on the sidewalk waiting for him, opening the door to his car, I didn’t even go to his dressing room to sell hello before the show. I never do. In 15 years, I probably, I don’t know, I’ve done it like seven times.”

Kimmel then said he prefers to greet his guests for the first time on stage.

“None of that actually happened,” Kimmel said before mocking the clip of Trump calling himself a “guy with potential.”

“A guy with potential to ruin everything that is good in the world,” Kimmel quipped.

Kimmel then told his version of the event, saying it was “exactly as true” as the president’s version.

“Donald Trump showed up one night outside our show banging on the backstage door. It was 2007, he had a half-finished bucket of chicken under his arm,” Kimmel said. “He was screaming that he needed to use the bathroom, but unfortunately, there was someone in the bathroom. I believe it was Zach Braff who was in the bathroom. So Donald took a look around, he stuffed the remainder chicken in his jacket, he dropped his pants… he did his business in the bucket.”

In May of 2017, Kimmel opened an episode of “Jimmy Kimmel Live” to reveal the circumstances of his son’s birth, which was met with complications to his heart. In an emotional and tearful monologue, he revealed his son was born with a heart disease that required surgery. Thanks to his experience with the doctors and nurses who helped save his child’s life, he used subsequent time on his show to call on fans to contact their local representatives about renewing the Children’s Health Insurance Plan and much more. 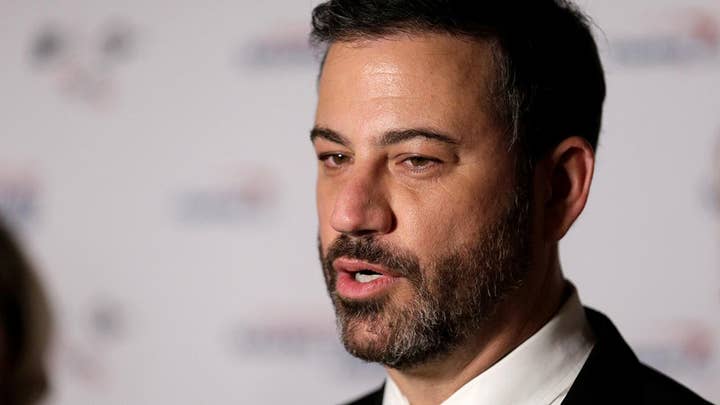 The decision to break from comedy for some serious topics was controversial for the funnyman and he has since used his platform to dabble in politics on a regular basis. Back in March, Kimmel even admitted to Oprah Winfrey that his foray into politics may have hurt his bottom line.

“That’s not ideal, but I wouldn’t change anything I said," he told Winfrey in O Magazine.