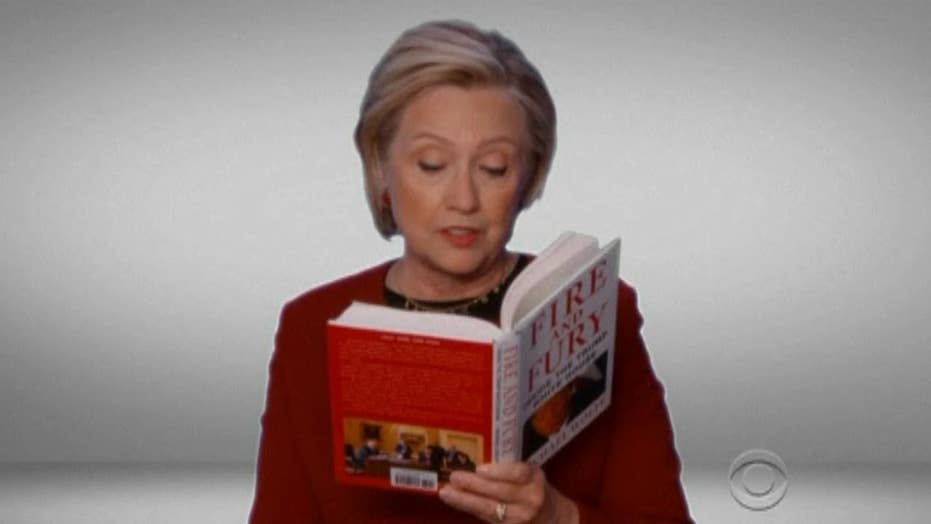 Haley, 46, tweeted during the Grammys telecast that she was not impressed by the skit that showed Clinton and anti-Trump celebrities reading from the controversial book "Fire and Fury."

“I have always loved the Grammys but to have artists read the Fire and Fury book killed it. Don’t ruin great music with trash. Some of us love music without the politics thrown in it.”

Corden addressed Haley’s tweet on “The Late Late Show” Monday night. During the show, he discussed his experience hosting the televised ceremony.

In his statements about Haley, Corden pointed out that there were plenty of political moments during the show.

Corden the took a swipe at President Trump, who is known for speaking out on social media.

“Well, Nikki Haley, you can tell your boss, some of us love politics without the Twitter meltdowns thrown in.”

While the Clinton segment resulted in wild applause from the star-studded crowd at the Grammys, Donald Trump Jr. also expressed outrage after the bit.

“The more Hillary goes on television the more the American people realize how awesome it is to have @realDonaldTrump in office #GrammyAwards2018,” he tweeted. “Getting to read a #fakenews book excerpt at the Grammys seems like a great consolation prize for losing the presidency. #GrammyAwards.”

After the show, Grammys Executive Producer Ken Ehrlich revealed it was Corden who helped get Clinton to appear in the skit.

“She kind of took a couple of days to say ‘yes,’ but ultimately she saw the script, she knew what we were doing and she liked it,” he said.

Ehrlich also said he was aware the bit was getting some backlash, but told reporters backstage, “We stand by what we did.”

"Fire and Fury: Inside the Trump White House," a best-seller by Michael Wolff, claims to give a behind-the-scenes account of the president's first nine months in the White House.