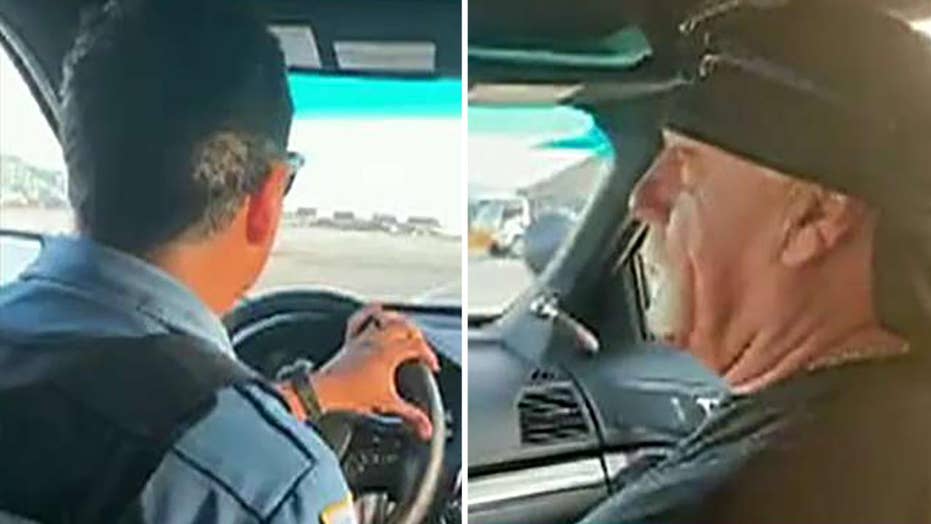 A Chicago police officer is under investigation after a video shows him weaving through the tarmac at O'Hare International Airport with the ex-professional wrestler in the passenger seat.

A Chicago police officer was under investigation Monday after apparently giving former pro wrestler Hulk Hogan an exclusive ride to the airport — in his squad car with sirens on while on duty.

The officer, who has not been publicly identified, transported Hogan, 66, his manager and another person, who filmed the incident, in his police vehicle along the tarmac of O’Hare International Airport, according to a video Hogan posted to Facebook Live Aug. 2.

"My Uber's got sirens!" Hogan is heard saying in the video, as the cameraman says, "We love Chicago PD."

"Chicago PD for life," Hogan reiterates, before thanking the officer for their ride. "Don't get in trouble doing this," Hogan's manager, Jimmy Hart, says in the clip.

HULK HOGAN TEAMS UP WITH JAMIE FOXX FOR WWE RETURN

In the video, which has since been deleted but was published by the Chicago Tribune, the officer can be heard saying his sergeant "is all for" giving Hogan a ride — which was apparently inaccurate.

Anthony Guglielmi, a spokesperson for the Chicago Police Department, told Fox News in a statement Monday that the ride was "not authorized by the department," and Cmdr. Thomas O'Brien, of airport operations, "had no knowledge that it was taking place."

"The video came to the attention of the superintendents office this week and it is of significant concern. An internal affairs investigation has been opened into the officer and supervisors at the airport," Guglielmi said. "We are in the process of revoking credentials for the officer to operate a vehicle on airport grounds pending the investigation."