Amber Rose claims that actress Gwyneth Paltrow is the "Becky with the good hair" who briefly broke up Beyonce and Jay-Z. (Getty/AP)

Model and reality personality Amber Rose has claimed that Gwyneth Paltrow is the iconic "Becky with good hair" mystery woman mentioned in Beyonce's 2016 "Lemonade" album, which caused a rift between the 35-year-old singer and Jay-Z.

“I definitely think that Gwyneth Paltrow is ‘Becky with the good hair. I feel like she’s the one who was, like, f—-ing Jay-Z,” the 34-year-old claimed while appearing in the recent episode of former "Hills" stars Spencer Pratt and Heidi Montag’s podcast, “Make Speidi Famous Again.”

She added: “They were like friends, and then, like, you don’t see Gwyneth Paltrow with Beyoncé anymore. It just seems like she was the one that was  f—-ing Jay-Z, and now Gwyneth lost her husband, but like Beyoncé’s still with Jay.”

Paltrow, who split with husband Chris Martin in 2014 and is currently engaged to TV producer Brad Falchuk, has denied Rose's "Becky" allegations.

A rep for the "Shakespeare in Love" actress told Us Weekly that Rose's claim was  “completely absurd and 100 percent false.”

But Rose has since put a rest to the "Becky" rumors and admitted that she was joking about linking Gwyneth and Jay-Z together.

“Bruh we were joking on a Podcast!” she reportedly tweeted. “I have no information about anyone’s Personal life.”

It's no secret to fans that Beyonce's "Lemonade" and her husband's 2017 album "4:44," both addressed the rough patch in their decade-long marriage. 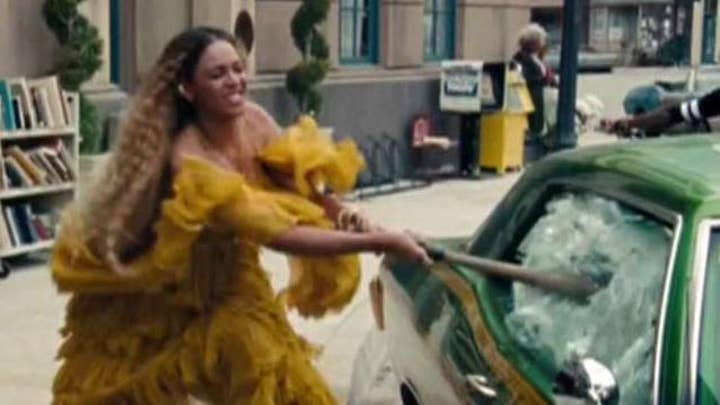 And ever since Beyonce dropped her single "Sorry" where she sang the famous line, "Better call Becky with the good hair," fans have tried to speculate who "Becky" was.

One of the biggest fan theories for "Becky" was fashion designer Rachel Roy. It was also rumored that the former wife of Damon Dash was the catalyst for Solange's famous elevator outburst on Jay-Z after the 2014 Met Gala.

Roy appeared to confirm that she was "Becky" in an Instagram post following the release of Beyonce's single. The post's photo caption read, “Good hair don’t care, but we will take good lighting, for selfies, or self-truths, always. Live in the light #nodramaqueens."

The fashion designer, who had a public Instagram account at the time, was then forced to make her account private after Beyonce fans swarmed her posts with bee emojis.

She then denied that she was "Becky" three days later in a statement which said, "I want to put the speculation and rumors to rest. My Instagram post was meant to be fun and lighthearted, it was misunderstood as something other than that. There is no validity to the idea that the song references me personally. There is no truth to the rumors.”

Meanwhile, Rose has been the first person to bring up Paltrow as "Becky." But the actress has been close with the Carters for several years. In a 2015 interview with Howard Stern, Paltrow called the pair "the greatest people."

"They are funny and sweet and self-aware and really intelligent," she said at the time.

And though the true identity of "Becky" has yet to be confirmed, Jay-Z did open up about cheating on his wife and keeping their family together in a 2017 interview with David Letterman.

“I want to have the emotional tools that it takes to keep my family together. And much like you, I have a beautiful wife who’s understanding and knew I’m not the worst of what I’ve done,” the 48-year-old rapper admitted. “We did the hard work of going to therapy and you know, we love each other, right? So we really put in the work.”

Beyonce and Jay-Z are now on their second "On the Run" dual world tour.