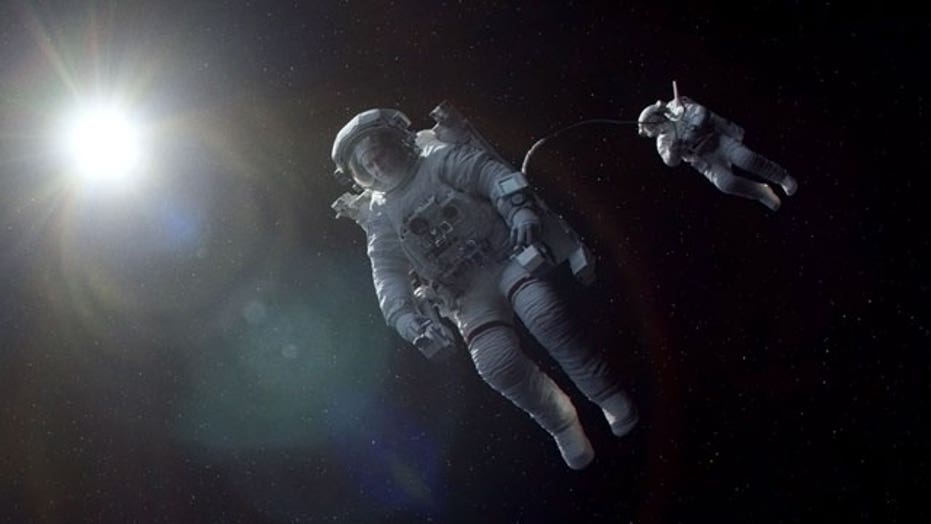 The simplest way to sum up director Alfonso Cuarón’s “Gravity” is to say it’s a true, new experience.

This mesmerizing, awe-inspiring and often frighteningly realistic exploration of space flight (we assume) harkens back to the birth of cinema when the mechanics of movie making were not widely understood by the audience and the images blew peoples’ minds. The first movies, like the Lumière’s “Arrival of a Train at La Ciotat” (1895) -- which simply shows a steam engine approaching a station – seemed like magic. Jumping forward to today, shots of Sandra Bullock and George Clooney drifting in orbit above our beautiful blue planet or clinging to dear life on splintering solar panels is almost stupefying, if not frighteningly, real – but it’s not.

“Gravity,” for the time being, is like those early Lumière picture shows – it’s (movie) magic. Four and a half years in the making, combining computer animation, principal photography then re-animating and simply using basic physics as a storytelling device, Aflonso and son/co-writer Jonás Cuarón have created one of the tensest movies in years.

Alfonso Cuarón opens the film with a nearly 20-minute single shot as astronauts Ryan Stone (Sandra Bullock) and Matt Kowalski (George Clooney) float in and out of frame doing maintenance work on a broken satellite. The affable banter between Clooney and Bullock quickly comes to a halt when debris from an exploded Russian satellite crashes into their shuttle, blasting them into space. With oxygen rapidly depleting and time running out, Ryan and Kowalski must use a combination of flight training, physics and luck to get them back to safety. But in orbit, as the saying goes, what comes around goes around: The two drifting astronauts have 90 minutes before they are bombarded again by the same debris.

On a technical level, “Gravity” is cinema’s best achievement in years. There is really nothing else to compare it with based on the realism of its visual effects and real-world implications. The mechanizations of spaceflight and space survival seem impeccably real, as do the decisions Cuaron’s characters make. The computer animation combined with Emmanuel Lubezki’s photography is breathtaking and expansive, managing a sense of claustrophobia in the one place there’s plenty of space. Clooney and Bullock frantically fumble across satellites and space stations that are tangible yet icily lifeless. Andy Nicholson’s production design seamlessly blends those cold, gray sets with the deep black void of space then contrasts with the beautiful Earth in the background. This is certainly a feast for the eyes and ears, if not entirely healthy for the heart.

Story-wise, though, “Gravity” is just your typical survival film which has been made aplenty, though, the elements are different in this setting with only a few broken spacecrafts and endless deep space. Survival films like “Gravity” are almost like one-off events, something that everyone should see at least once, but don’t often stand the test of time. The allure of a movie like “127 Hours” was to see how James Franco would cut off his arm, but can anyone remember the rest of the movie? And does anyone care to? Fortunately, “Gravity” does have more going for it than most survival films, which primarily, is the various layers of fear: the fear of the unfamiliarity of space, the obvious fear of time, and finally the fear of not just dying but the question of how will your end come?

It takes more than just visual effects to hold a film together and Sandra Bullock is the pull in “Gravity.” For the majority of the film, Bullock is alone, and while acting in general is no easy feat, acting solo is an actor’s most challenging role and Bullock is effortlessly sensational. Her roller coaster of emotions from the start of the film to its final frame are riveting. The suspense in this film would be null without Bullock’s wonderful and relatable connection. The Cuaróns’ makes Ryan an "everyman," so watching her struggle to save and be saved is like having a sinking feeling of watching one’s self go through this traumatic ordeal. Bullock wasn’t the first choice to play Ryan, but Cuarón should count himself lucky that he landed a powerful, often beautiful, performance in the end.

While “Gravity” gives audiences a sensational and unparalleled fictional view of the final frontier, Bullock says it best as her dread sets in: “I hate space.” For those who have always dreamed of becoming an astronaut or visiting the stars, this incredibly tense film might change your mind.  Going in to the film knowing disaster will strike just makes the tension that much greater and when Cuarón unleashes hell upon Ryan and Kowalski, the suspense is relentless and exhausting.

“Gravity” deserves the IMAX treatment more than most films. An already immersive experience is incredibly heightened by the big screen format. Check out on IMAX if possible. It will be worth the extra coin.

It remains to be seen if “Gravity” will have a long shelf-life once every new science fiction movie hereafter copies everything from its realism to its naturalistic effects to Steven Price’s hypnotic and vertigo-inducing score. “Gravity” is definitely an experience – an event – and whether or not that lasts, as of right now, there’s just nothing else like it. And that is a rare treat at the movies.