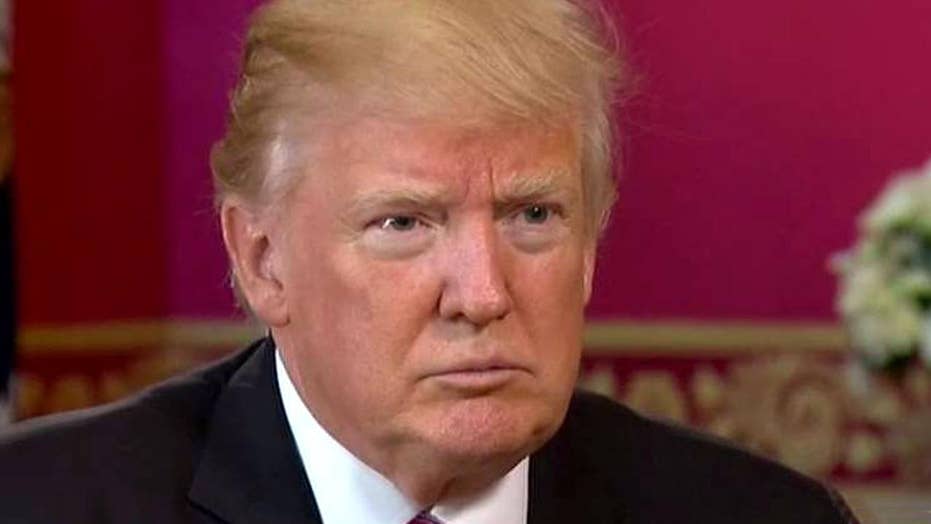 Pick on someone your own size.

That was President Donald Trump's message to comedians cracking cruel jokes about his 10-year-old son.

In a wide-ranging interview from the White House on Thursday that touched on everythign from torture to the Mexican border, Trump talked to Fox News' Sean Hannity about the attacks on his young son, Barron Trump.

"A person from 'Saturday Night Live' was terrible," Trump told Hannity. "I don't mind some humor but it's terrible. For them to attack, for NBC to attack my 10-year-old son... it's a disgrace ...It's not an easy thing for him. Believe me."

Trump also commented on Alec Baldwin's impersonation of him on "SNL" saying "he's terrible on the show."

The President addressed Madonna's speech at Saturday's Women's March in Washington DC as well, where she said she's considered "blowing up the White House." 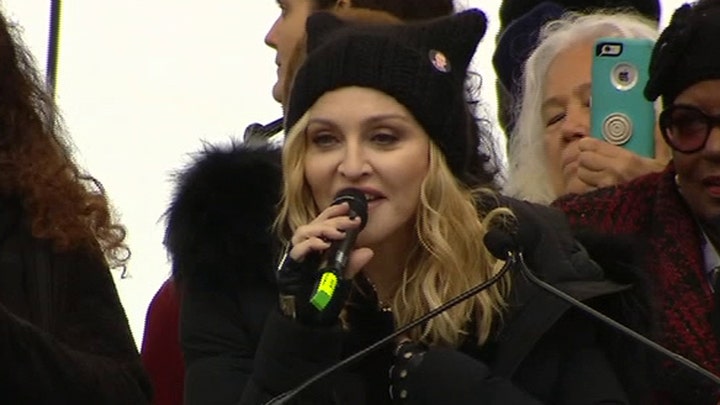 "Honestly, she's disgusting. I think [Madonna] hurt herself very badly. I think she hurt that whole cause," Trump said, adding that what the Queen of Pop said along with a "couple of others" was "disgraceful to our country."

Trump defended his forthcoming executive orders that are expected to suspend the United States’ refugee program and halt the issuing of visas to citizens of certain countries, saying, "We can't take any chances."

"Right now, the FBI has over 1,000 [terrorism] investigations going on … and these are people that we let in," Trump said from the White House Thursday. "We don’t need this. Some people have come in with evil intentions. Most haven’t, I guess, but we can’t take chances."

A draft executive order, which Trump could sign as early as Saturday, reportedly would halt the United States' broader refugee program for 120 days and prohibit citizens of Iran, Iraq, Libya, Somalia, Sudan, Syria or Yemen from obtaining U.S. visas for at least 30 days.

Trump also defended his executive order to construct a wall along the U.S.-Mexico border, a key promise of his presidential campaign.

"The wall is necessary," Trump said. "That’s not just politics, and yet it is good for the heart of the nation because people want protection and a wall protects. All you’ve got to do is ask Israel."

The president also revisited the issue of torture, saying that he believes methods such as waterboarding are effective. However, Trump added that he would follow the advice of Defense Secretary James Mattis, who has argued against the use of such tactics.

"Look, I spoke with people who were in this world that we’re talking about," Trump told Hannity. "They said, ‘Absolutely, it works.’ Now, General Mattis said that he doesn’t intend to use it. I’m with him all the way. Do I believe it works? Yes, I do."

The president also swiped at the media, which he said was made up of "very hostile people" and "very angry people."

"The media — much of the media, not all of it — is very, very dishonest," Trump said. "Honestly, it’s fake news. It’s fake. They make things up."

Trump covered a range of other topics in the interview, including his goal of repealing and replacing ObamaCare, which he called a "horror show” and a “disaster.”

“It actually explodes [this year]," Trump said, "and I told [congressional] Republicans. I said, 'Look if you really want to do something, just let it explode, and then [the Democrats will] come begging us to fix it.’ But that’s not the right thing for the public because we have to get it fixed."

Trump also disclosed that he had decided on his nominee to the U.S. Supreme Court "pretty much in my mind." He had previously said he would announce his choice Feb. 2.

The president blasted Democrats threatening to hold up his eventual nominee – and said he would want Senate Majority Leader Mitch McConnell, R-Ky., to use the so-called “nuclear option” if they filibuster.

“I would. We have obstructionists,” Trump said, complaining about Democrats’ treatment of other nominees, including Attorney General pick Jeff Sessions. The “nuclear option,” if pursued, would allow majority Republicans to seek approval of Trump’s Supreme Court nominee with just a simple majority, as opposed to a 60-vote threshold.

The president also said he was examining the case of Navy sailor Kristian Saucier for a possible pardon. Saucier, 29, was sentenced to a year in prison for taking photos of parts of a submarine's nuclear propulsion system. As a candidate, Trump contrasted Saucier's treatment with the FBI's decision not to charge Hillary Clinton for using personal email while secretary of state.

PARDON ME: NAVY SAILOR IN JAIL FOR SUBMARINE PHOTOS PLEADS FOR MERCY FROM TRUMP

"I think it’s very unfair in light of what’s happened with other people," said Trump, who added that he wouldn't even consider a pardon if not for the outcome of the Clinton investigation. "How can you have somebody else get away with such a tremendous amount and then this person who takes a picture of his desk on an old submarine? Look, if China or Russia wanted information on that submarine, they’ve had it for many years. That I can tell you."