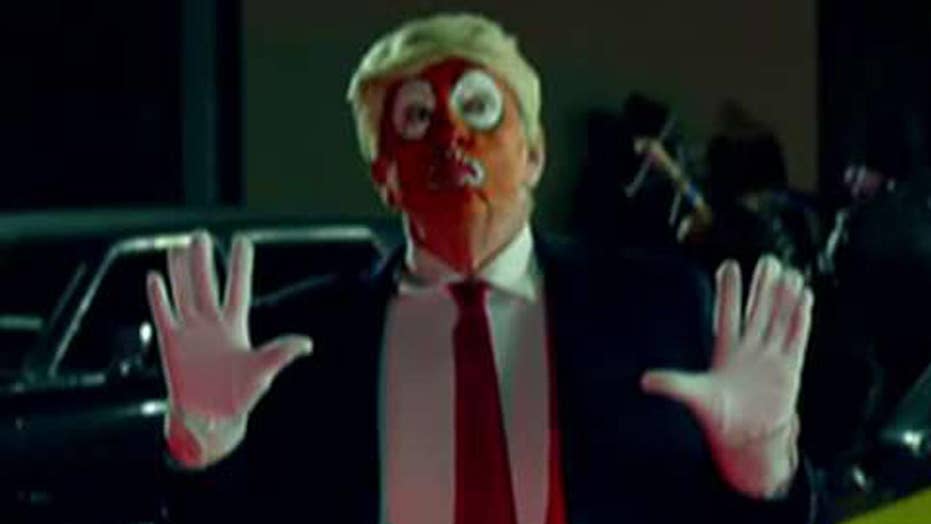 A fair and balanced debate about the controversy

Many Hollywood stars have been vocal about their dislike for President Donald Trump. But a few of them have taken things too far by threatening to harm the president.

Actor Johnny Depp arrives on the red carpet for the global premiere of the film "Pirates of the Caribbean: Dead Men Tell No Tales", in Shanghai, China May 11, 2017. (Reuters)

Johnny Depp compared himself to John Wilkes Booth and joked about assassinating President Trump during an event in Glastonbury June 22.

"When was the last time an actor assassinated a president?" he asked, referencing John Wilkes Booth's assassinating President Abraham Lincoln in 1865.

"I want to clarify, I am not an actor. I lie for a living," Depp said. "However, it has been a while and maybe it is time."

Comedian Kathy Griffin, right, speaks along with her attorney Lisa Bloom during a news conference, Friday, June 2, 2017, in Los Angeles, to discuss the backlash since Griffin released a photo and video of her displaying a likeness of President Donald Trump's severed head. (AP Photo/Mark J. Terrill) (AP)

Kathy Griffin came under fire for posing with a bloodied mask that resembled President Trump. Griffin addressed the backlash that followed telling reports during a June press conference her career is over after she says the Trump family systematically "mobilized their armies" against her.

"I made a horrible, horrible call," she said. "Trust me, if I could redo the whole thing I'd have a blow up doll and no ketchup."

Snoop Dogg released a music video in March where the rapper used a toy gun to shoot a clown resembling President Donald Trump. In the video for the rapper's remixed version of the song "Lavender," by BADBADNOTGOOD, Snoop Dogg raps about police brutality in a world inhabited by clowns. He raps, "This is the final call" before pointing a toy gun at the clown dressed as Trump who is smoking a cigarette. Snoop pulls the trigger and a flag that says "bang" shoots out from the toy gun.

The rapper told Billboard magazine he wasn’t looking for any pick-up from the video. "Any time I drop something, I’m trying to fill in a void. I feel like it’s a lot of people making cool records, having fun, partying, but nobody’s dealing with the real issue with this f--ing clown as President, and the sh-t that we dealing with out here, so I wanted to take time out to push pause on a party record and make one of these records for the time being.”

And the President quickly took to Twitter to respond to the video, tweeting, “"Can you imagine what the outcry would be if @SnoopDogg, failing career and all, had aimed and fired the gun at President Obama? Jail time!”

At the Women’s March on Washington in January, Madonna made a comment about "blowing up the White House."

She told the crowd of 500,000 people, “I’m angry. Yes, I am outraged. Yes, I have thought an awful lot about blowing up the White House. But I know that this won't change anything. We cannot fall into despair. As the poet W. H. Auden once wrote on the eve of World War II, ‘We must love one another or die.’ I choose love. Are you with me?”

President Trump responded by calling the superstar “disgusting” and Madonna took to social media to clarify her statement. She wrote, “However I want to clarify some very important things. I am not a violent person, I do not promote violence and it's important people hear and understand my speech in it's entirety rather than one phrase taken wildly out of context.”

TMZ caught actor Mickey Rourke on a rant about Trump in which he said threatened to beat the then presidential candidate with a baseball bat. He continued to call him “the biggest scumbag on the planet.”

The actor then called Melania Trump a “golddigger.”

“F--k him, f--k the horse he rode in on,” he said. “I think his wife is one of the biggest golddiggers around. I know, I used to go out with a golddigger…”

The “Making History” star Adam Pally told TMZ when the gossip site questioned Pally about time travel. Pally was asked who he would not want to spend time with and he decided to answer that he would "have to kill Trump or Hitler."