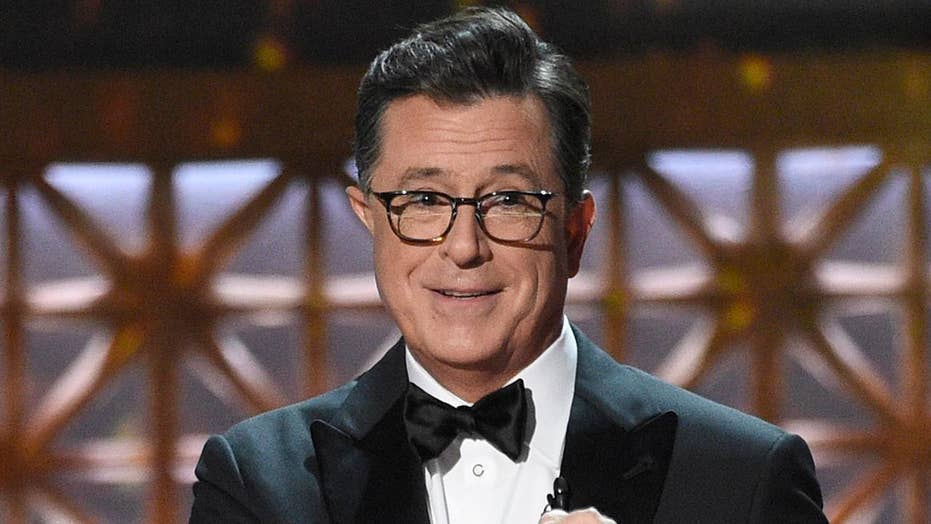 How low can the Emmys go?

It looks like the 69th annual Emmy Awards are heading into sub-basement territory in terms of ratings after host Stephen Colbert spent much of Sunday’s event attacking President Trump.

It turns out American viewers may not have been as into Trump bashing as Hollywood would like them to be, as the 8.2 overnight rating among metered market households is down 2.4 percent from the 2016 edition, which would make it the lowest rated Emmy telecast ever.

The reason it’s hasn't been officially labeled the lowest-rated Emmys yet is because six of the 56 markets are in Florida have not reported, as Hurricane Irma is still holding up the process in areas that were severely impacted by the storm.

“The Emmys are a Hollywood bubble show," Media Research Center vice president Dan Gainor told Fox News. "Actors and directors get to pretend they are important because they are doing such insightful takes on life in America, when they have zero idea what life in America is for the other 330 million people."

Yet despite the cratering viewership, Gainor doesn’t think the Emmys will shy away from bashing Trump anytime soon.

“Hollywood won’t walk away from politics. The left wants to force politics into every single aspect of our lives -- from sports to movies to the food we eat. They won’t be satisfied until we are all appropriately woke to their struggles du jour,” Gainor told Fox News.

NICOLE KIDMAN BREAKS DOWN IN TEARS

Trump was attacked from Colbert’s opening monologue through the end of the three-hour program. Alec Baldwin won an award for portraying Trump on “Saturday Night Live,” and used his speech to mock the president for not winning an Emmy during his time hosting “The Apprentice.”

Ex-White House Press Secretary Sean Spicer even made an appearance to poke fun at his tenure, but many viewers are even upset that CBS allowed the award show to normalize a former member of the Trump administration. Apparently it’s OK to laugh at Trump and his surrogates, but not with them.

Academy Awards prognosticator Steve Pond called the event “the most political Emmys show ever” and said voters even decided winners based on politics, opting for programs with a political agenda such as “The Handmaid’s Tale” and “Atlanta” over less-polarizing shows such as “Stranger Things.”

WAS ACTRESS REALLY A SORE LOSER?

“Voters made it clear: They were sending a message,” Pond wrote.

Gainor agrees. “The Emmys celebrate shows that almost no one either watches or cares about," he said. "No ordinary Americans care about ‘The Handmaid’s Tale.’ No ordinary Americans watch ‘Veep.’ The only show the Emmys were honoring that most people even recognize was ‘Saturday Night Live.’”

The Emmys went head-to-head against NBC’s “Sunday Night Football,” which presumably didn’t help viewership, but the awards have now hit new ratings lows for three straight years. Perhaps some viewers want to enjoy the awards show as an escape from politics, or perhaps some viewers simply don’t agree with everything the Hollywood elite has to say. Colbert and the event’s producers didn’t seem to care that roughly half the country wouldn’t be amused by non-stop attacks on Trump.

“Entertainment Tonight” anchor Kevin Frazier appeared on “CBS This Morning” on Monday to proclaim that “politics took center stage,” and the “recurring punchline was Donald Trump.” The CBS morning show co-hosts seemed to approve, with Norah O’Donnell calling it “one of the best shows ever,” but that was before the dismal rating came out.

Gainor asked, “Why would anyone who isn’t a die-hard liberal watch?”