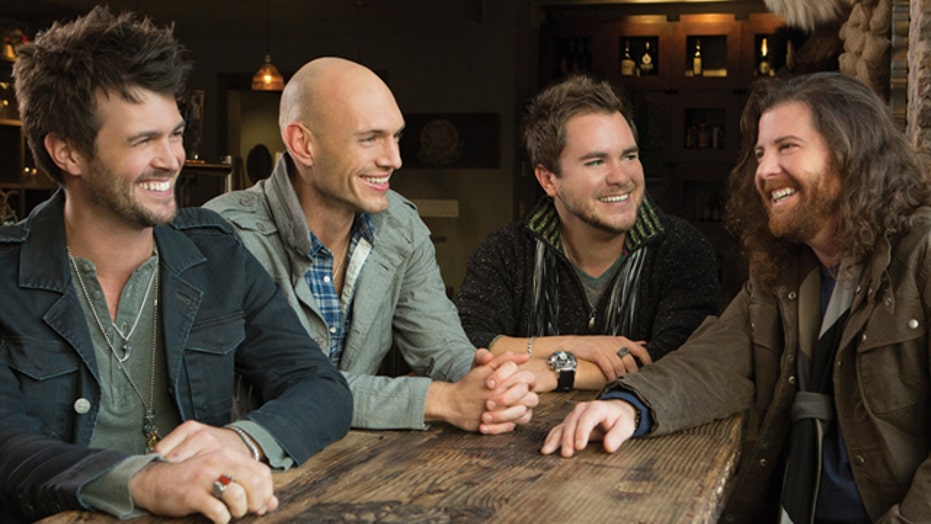 NEW YORK – The Eli Young Band is back with a new album, "10,000 Towns," and the guys are excited about early fan feedback on the release, including their hit single "Drunk Last Night," which has already be certified gold. Mike Eli, Jon Jones, James Young, and Chris Thompson joined FOX411 Country in studio to talk about how the collection differs from what they've done in the past and how they've learned to keep a good balance between life on tour and life at home.

FOX 411 Country: What feedback have you gotten so far?

Chris Thompson: It's cool that they're not just talking about the singles and all that, it’s really nice that people are getting into the meat of the album. As far as I've seen it's been really positive feedback so far.

James Young: We live in the age of instant feedback now with Twitter and Facebook and all that so… for better or worse, it’s fun, it's a little addictive going through all day to day and looking at all the comments.

FOX 411 Country: How is this album different from your others?

Jon Jones: I think this album is slightly more mature than anything we've done before. We did a lot more songwriting, we had a lot more songs to pick from. I think it represents where we are in our lives in a lot of ways, we are all married, a couple of us have kids, we're just in a really good place personally and our careers are in a good place so I think that's reflected. I think we came to the table with this record to make something that would be fun to play live. So I think there's a lot more uptempo fun sing-a-long catchy tunes. It's going to represent our live show more than any other record has before.

FOX 411 Country: Good timing… where are you heading on the road?

FOX 411 Country: How much fun are you having with your hit lead single “Drunk Last Night”?

Jon: It's fun when we have fans sing back to us for a song, it was fun with “Crazy Girl” and “Even if it Breaks Your Heart” the way that people internalize that song and really related to the stories, but with “Drunk Last Night” it's a totally different animal because the stories people associate with that song and their experience of maybe calling someone after a few too many when maybe they shouldn't have or maybe they said a few things, it's really fun, the passion people have with that song compared to other singles we’ve had.

FOX 411 Country: Can you find the balance between life on the road and family life?

James: Oh yeah, we've been family from the beginning, and now with young kid,s and we've got the wives out this week for CD release, and so we try to bring our families out on the road as much as we can - it's a little tougher for these two guys.

Mike: My wife and I have a 19-month-old at home so her schedule is completely opposite of the way our schedule is out on the road. So we try to make sure that they come out with us as much as possible but it's really difficult. But as they get older it’s going to get easier and easier, and Jon's is 13 months old now, so him and his wife will hopefully bring him out a little more now that he’s a little older.

Jon: I think the thing we’ve learned and have figured out is the more years we do this the less selfish this life becomes, because when we started out in college it really was just about playing music, getting up on stage, having a good time, trying to make it and it was a very selfish thing. Now that we have families it's great when they come out on the road. When they can’t, it’s easy to remember that that's why we do it now. It's to have a better life with them and to support them, and we're lucky with Facetime, and just all the different ways we can keep in close contact through technology, that even though you're not there, it's a lot closer to being there then it used to feel.