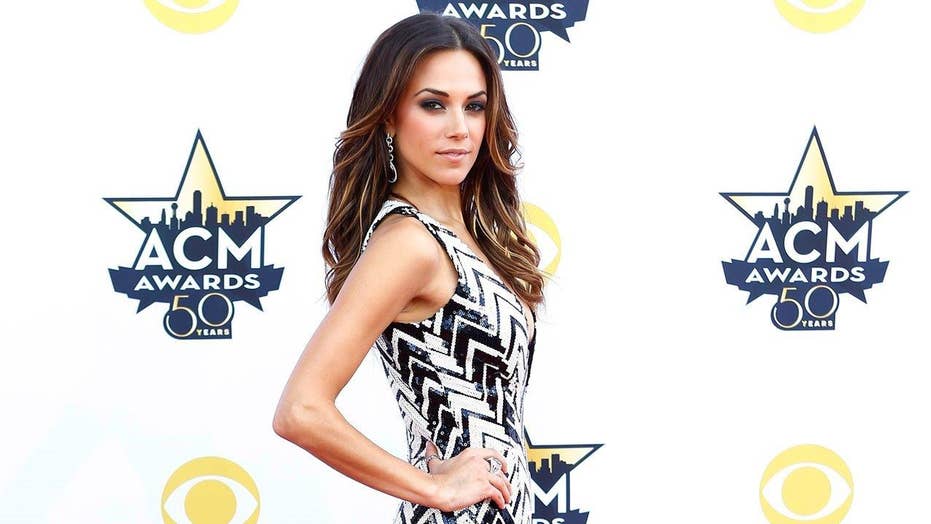 "Dancing with the Stars" featured a Monday semifinal night full of emotion as the celebrities and their friends and family members discussed their lives before the show.

And actress and country singer Jana Kramer, who all season has spoken about her past romantic troubles, once again opened up to fans.

In her pre-dance footage, Kramer explained how her parents' divorce sent her on a search for validation from men. After Kramer first moved to Los Angeles pursuing her show business dream, she met an older man and said, "I got stuck in a very bad situation."

However, the three times married Kramer has found joy on "DWTS" after her current husband, football player Mike Caussin, reportedly checked into a sex addiction treatment program. The couple has a baby daughter, Jolie.

When asked by FOX411 after Monday's show if she's given up on love, Kramer said, "I haven't, no. I truly believe it's out there. I believe in a lot of things and love will be one thing that I'll never not believe in because I look in my daughter's eyes and that's the biggest amount of love that I could ever feel."

On the semifinal show, Kramer and her partner Gleb Savchenko received a score of 28 out of 30 for their quickstep and a perfect 30 for their trio dance with Alan Bersten.

During her trio dance, she noted, "I got to play this really powerful person and Gleb was like, take all the crap that you've been through and put it into that dance and slay people."

Their total of 58 was good for third place, behind leader Hernandez and her partner Val Chmerkovskiy, who performed a flawless samba and then a trio dance with his brother Maks Chmerkovskiy.

Jole and pro Sasha Farber turned in a perfect night as well with two 30s, but unfortunately for them, elimination hinged on the scores and votes from last week, when they did not perform as well.

As the first little person on "DWTS" was eliminated, her 6'5" co-star Calvin Johnson Jr. sighed to FOX411, "I hate to see her leave."

Former football player Johnson finished with the lowest score of the final four, as he scored a 26 for his tango and a 30 for his trio dance for a total of 56.

Johnson told viewers in his personal story footage that he'd retired from football rather than risk injury.

He and partner Lindsay Arnold had a slip in their first routine, causing Judge Julianne Hough to exclaim, "Oh, shoot! I'm so upset."

After the show, Arnold explained to FOX411, "We both got a little excited. We both did more rotations than we've ever done. We just had a little moment." They came back strong in the second dance.

Meanwhile, race car driver James Hinchcliffe wound up the night second to Hernandez after an Argentine tango that scored 29--and 30 points for a polished jive trio dance for a total of 59.

On camera, his girlfriend Rebecca Dalton told how they had met in high school and his fellow race car driver friends remembered Hinchcliffe's determination to come back from a near-fatal crash last year.

Hinchcliffe was thrilled to be dancing again with his original partner Sharna Burgess after she had to sit out two weeks with an injured knee.

Burgess told reporters backstage after the time off, "I feel really strong….I think our reunion dance was pretty epic…[I have] no pain whatsoever. I got the best treatment available in the country with Dr. William Seeds in Ohio."

And just in time! Next week, the stars will find out who has the ability to go the distance in the climactic season finale.