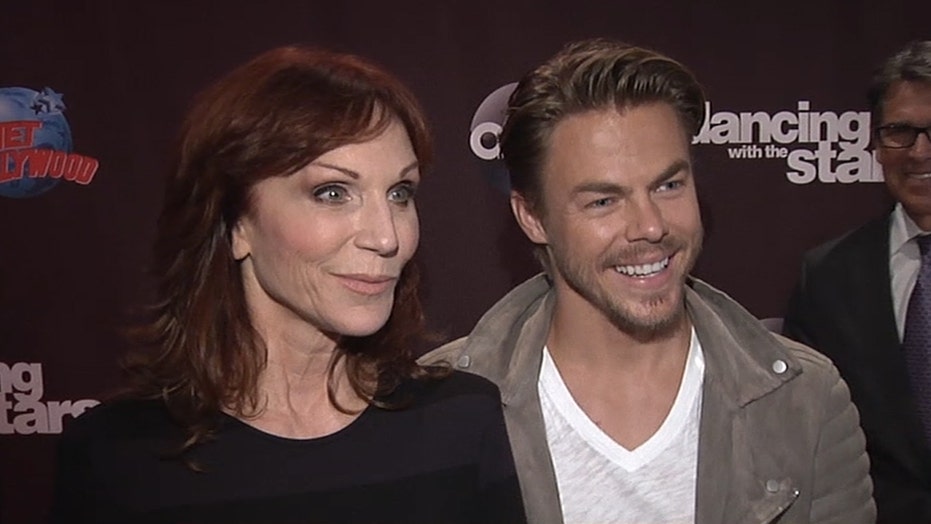 Meet the 23rd cast of 'Dancing with the Stars'

Fox411: Diana Falzone asks the new cast of 'Dancing with the Stars', including Vanilla Ice, Amber Rose, Marilu Henner and more, whether or not they can handle the challenge of competing on the famous show

On week seven of the competition, the former "Taxi" star, 64, fell hard during her futuristic team dance.

After separating from a hold position with partner Derek Hough, viewers saw her go down and then slide out of camera range.

Backstage, good sport Henner explained to reporters, "That was so weird because it was like, I dipped and then I was on the floor but I fell on my butt so that's fine. That was an easy thing.

Henner laughed to FOX411, "I felt like I was skiing. It was a 'yard sale'—when you lose your poles, your skis, your hat, your gloves."

Longtime pro Hough thought the live TV mishap happened because "her feet have been kind of sore so I don't think she's been as sure footed."

Hough said that Henner, who also performed the Charleston as her individual dance Monday, "did something to the back of her heel" during practice and he recommended a doctor she is consulting.

"I might have to get a little pain shot or something," Henner said backstage after the show.

The actress revealed she had received a shot from another doctor in her ARM just before Monday's show—which didn't help her feet at all! "I called him an hour into it and I went, 'It had no effect,' " Henner said.

During her chaotic night, Henner received a 29 for her Charleston and her Team Future got a 35 (beaten out by Team Past, led by race car driver James Hinchcliffe).

However, "The Brady Bunch" star Maureen McCormick was the one eliminated at the end of "eras" night.

McCormick had cracked up the audience by doing a 1980s inspired Bon Jovi tango and stumbling after partner Artem Chigvintsev stepped on her skirt. The number earned 28 points.

Later, she oohed about Team Past, "I love my team! Let's have a slumber party."

But it was no surprise TV's Marcia got the boot as for weeks, she has cried in rehearsals.

Meanwhile, Hinchcliffe, dancing jitterbug, and Johnson, performing jive, tied for first in the individual portion with both receiving 36.

Hinchcliffe's jitterbug was a stunner as he did a 1940s military-themed dance to the famous Glenn Miller tune, "In the Mood" that had judge Bruno Tonioli praising it like an old movie scene.

But as viewers saw, his partner, Sharna Burgess, fell and suffered a knee injury on Monday before the show and she told FOX411 backstage, "I have to go for an MRI tomorrow, but as of right now I've sprained my MCL, so it's overstretched. It just keeps snapping against the bone. I have to just manage the pain. James is an amazing partner getting me through that…."

Burgess, who has been on the show eight seasons, admitted, "When I fell, it was pure panic. I've had an ACL reconstruction on that very same knee and so I was scared to death, oh, my God, I've busted my knee and I'm out of this competition…within the hour, working with our [physical therapists], I realized there's no tear, there's no swelling…we're going to power through."

Kramer's partner Gleb Savchenko had words with returning Judge Len Goodman (who has been in England judging "Strictly Come Dancing"). Even though they performed an energetic 1970s disco-style samba, Goodman sniffed that there wasn't enough content.

"It's not a dance competition, it's a TV show," Savchenko strangely complained to co-host Erin Andrews.

After the show, Savchenko was still steaming, and told reporters, "I think Len should spend more time with us, rather than in England."

Ryan Lochte only received 28 points for his rumba with Cheryl Burke—but got a boost from a rehearsal visit from his fiancée, sexy former Playboy model Kayla Rae Reid.

Jole was caught on camera sobbing in rehearsal during the team dance competition. She thought the others had to change the routine to deal with her size and cried, "I don't want to hold anybody back."

The "Little Women LA" star also felt odd when her partner Sasha Farber, and other pros Val Chmerkovskiy and Savchenko started speaking Russian in front of her.

She told FOX411 after the show, "It was just weird for me…it was everybody asking Sasha, 'She can't do that. What can she do?' It was like I wasn't even there….everything was in my head in that dance. I was very overwhelmed with those emotions."

But she and the other competitors (sans McCormick) prevailed—and are now moving on to week eight.