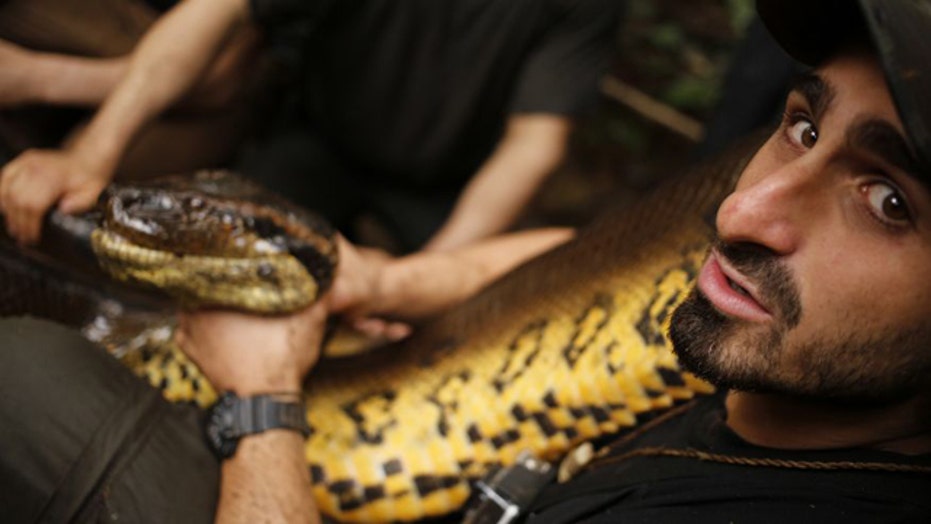 Paul Rosolie, we’re sorry to report, was not eaten alive by an anaconda on Discovery's special, "Eaten Alive." He got hugged and kissed instead. When the snake hugging proved too much for one of his lower arms — Rosolie had insisted on taking off the lower-arm section of his special crush-proof suit for mobility sake — he bailed.

This was probably not what Discovery had in mind when, early on in the telecast, it tweeted:

Last month, Discovery and Paul Rosolie had asked the media to swallow a whopper — Rosolie would attempt to be eaten alive by an anaconda, for all the anacondas out there who have no voice. Some bit.

In "Eaten Alive," Rosolie said, he would attempt to be swallowed by a 25-to-27-foot anaconda that slipped through his hands and nearly dragged him to the bottom of the floating forest that happened on his one and only previous expedition to this secluded part of the Amazonian jungle. But one hour and 40 minutes into the two-hour special, Rosolie was seen failing entirely to capture that anaconda, and they instead had to use some understudy welterweight anaconda they had lying around because, Rosolie explained, he was still intent upon getting crushed and swallowed by an anaconda, for the sake of the snakes.

While failing to produce much drama, the special did cough up some great anaconda-theme ads, including a Man Up Moment repeat of a moment during the special in which Rosolie dives into the water in pursuit of a snake — brought to you by Every Kiss Begins with Kay Jewelers — as well as an ad mocking the show while plugging an online contact lens store. That company nicked the show again in its own tweet after the telecast was over:

In its news release, Discovery Channel described Rosolie as snake researcher and conservationist who has dedicated his career to studying the Giant Green Anaconda.

In an interview with adventure travel web site Curious Animal, published May 16, Rosolie described thusly his research and conservation work on the worlds largest anaconda:

"I have a six-foot arm span and I jumped on a snake where I couldn't wrap my arms around the snake. That's a giant snake…She kept moving with me on her back, so I was riding an anaconda and she didn't even seem to mind.”

Rosolie said he was in extreme danger when he hitched a ride on the back of the snake for research purposes, we now know adding, "I don't know why I jumped on it, except I was so excited and amazed to see an animal like that. I think I just needed that experience of getting to touch it."

Last month, while Discovery Channel said Rosolie would “attempt something no one has ever dared: to be EATEN ALIVE," Rosolie himself floated his I did it for the Rain Forest and all its living creatures defense:

"I've seen first-hand how the Amazon Rainforest is being destroyed. It is so rampant that we may be the last generation with the opportunity to save it. People need to wake up to what is going on. What better way is there to shock people than to put my life on the line with the largest snake on the planet, the Green Anaconda?" he asked rhetorically, since he'd previously been compelled to reveal the stunt already had been shot, and the snake had survived his publicity stunt, in response to the growing din of critics. Discovery Channel tried to drown that din, by announcing that the anaconda that attempted to dine on Rosolie was alive and well. Discovery added that the Lumpy Ninja get-up Rosolie wore during his attempt to force himself, meal-wise, on the snake who was just minding her own business in the floating forest, was built to ensure the snakes safety just as much as it was to protect Rosolie's life. This, in response to nearly 38,000 signatures on a Change.org petition to persuade Discovery Communications to dump this special it describes as made-for-TV animal abuse. PETA weighed in too.