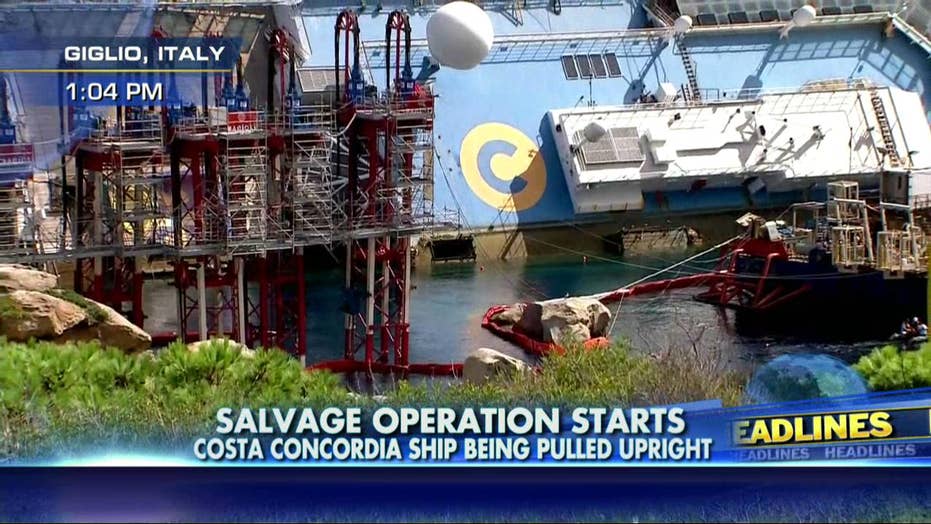 Discovery Channel Monday morning to announce it would document the raising of the Costa Concordia, and get it on the air lickety split – this Friday at 10 p.m. ET. As Discovery put out the word, engineers in Giglio, Italy on Monday had begun raising the cruise ship that ran aground nearly two years ago, during what was supposed to be a weeklong Mediterranean cruise, killing 32 of its 4,229 passengers and crew members. Discovery learned the hard way last year the price of delay when it comes to cruise-ship disaster docus, after getting bloodied in a major battle with National Geographic Channel. Back in January of ’12, just days after the cruise ship ran aground off the Tuscan island, Discovery Channel had announced it would “dissect the anatomy” of the Friday the 13th disaster and – with the quiet confidence of a network long used to being the only game in town – said the docu would air “this spring.”

But on the same day an Italian court refused to lift the house arrest order for the ship’s captain, Discovery nemesis National Geographic Channel attacked, announcing it had hired the producers of the quick-turnaround British documentary “Terror at Sea: The Sinking of the Concordia” — which had already aired on the United Kingdom’s Channel 4 — to rework it for this market, rename it "Italian Cruise Ship Disaster: The Untold Stories," and slap it on the air that very Sunday, beating Discovery’s "Cruise Ship Disaster: Inside the Concordia" date by a week. “Just announced! National Geographic Channel to air first U.S. documentary detailing the Italian cruise ship disaster moment-by-moment,” NatGeo bragged back then.

Discovery’s Costa Concordia project may have been a very focused forensic investigation, using experts from the Massachusetts Maritime Academy to answer such questions as “What happened at the time of the accident, what role did the captain play, how did they evacuate, what are the mechanics of searching the site while guarding the waters against environmental damage, and so on — while NatGeo’s Concordia docu would bring us “haunting stories” told by American survivors with home video (which is why NatGeo couldn’t get it on the air even sooner — the producers had to swap out the non-American survivor interviews for American ones).

Discovery’s Costa Concordia documentary did wind up sliding past NatGeo’s in the ratings and winning The Great Costa Concordia Dueling Disaster Documentary Derby, but NatGeo pointed out it was available in nearly 50 million fewer homes than Discovery at the time, and its premiere audience of 1.2 mil at least put it in the same league as Discovery with its 1.8 mil. Both networks declared victory, and they all lived happily ever after. Or did they? Stay tuned….