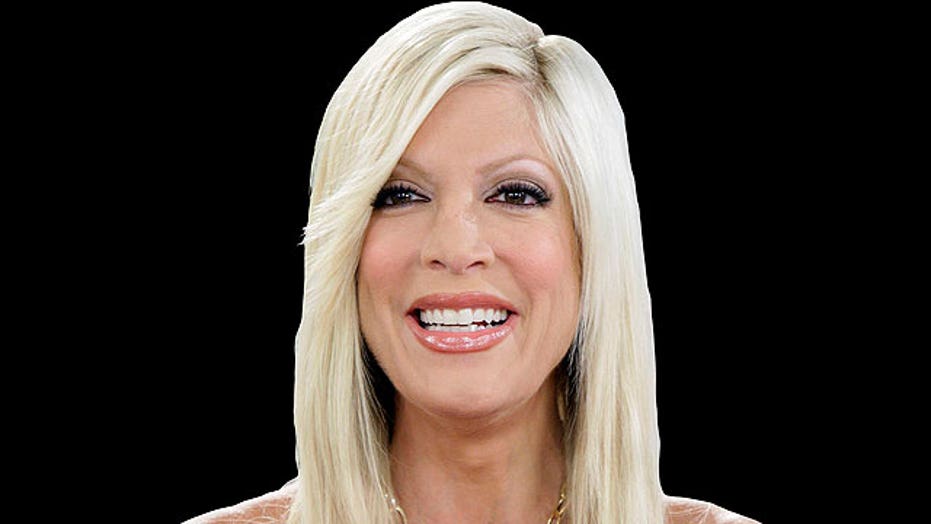 Tori Spelling is the latest star with a sex tape

Tori Spelling revealed she--like everyone else in Hollywood--has a sex tape. Plus, Pam's hair and homewreckers.

Tori Spelling's oldest daughter Stella had no idea that her mother had  breasts implants until she overheard a conversation.

In an interview with Lena Dunham for the "Girls" star's Lenny newsletter, the former "Beverly Hills, 90210" actress recalled the moment she had to sit her daughter down and explain that she had work done.

Spelling said when her family was taping "True Tori," the subject came up about how people were "obsessed" with the actress getting her breast implants removed because they had expired and been recalled. "[Stella] overheard and said, 'Huh, your boobs aren't real?' I was like, 'Oh my God,'" she recalled. "It was like Santa Claus. I didn't know what to do."

Her daughter did not take the news well. "Her world was just shattered," Spelling said. "It hit me hard, and I felt so guilty. I thought, 'I can't believe it.' Why was I even talking about getting my breast implants removed in 'True Tori'? I shouldn’t have been talking about that."

WATCH: Tori Spelling Reveals She Had Sex With Jason Priestley, Got Shannen Doherty Fired From 90210

The 42-year-old  admitted that the revelation did change the dynamic of her mother-daughter relationship a bit. "I explained it to her, and she was fine. Now she asks questions," she told Dunham. "She says, 'Are you going to get them replaced because you said they're recalled and you need to get a new one?' She's very mothering, my 7-year-old."

Spelling also spoke about her own mother, Candy Spelling, and how she worried about having daughters because of their "complicated" relationship. "When I found out I was pregnant with a daughter, I thought, 'F**k. I am screwed,'" she said. "I cried when I found out I was carrying a daughter. I didn't know what to do. I thought, 'I'm going to repeat the past. This is just the way it goes.'"

She added, "I would always ask my dad [Aaron Spelling], 'Why is mom like this to me?' He would tell me, 'She had a really bad relationship with her mom. Her mom was like that with her. There was a lot of competition. It was complicated.'"

WATCH: Tori Spelling Reveals How She 'Fights the Sag' With Bra Selfie

The mother-of-four now makes a "conscious effort" not to pass down any bad parenting habits. "I just reminded myself every day that I'm not my mom," she said. "I'd think, 'What would make me different? What’s my instinct of what would make that different?' My instinct was touch. I just wanted to hug her and hold her and tell her how beautiful she was and make eye contact."

When ET caught up with Spelling and her husband, Dean McDermott, earlier this month, the couple was eager to share what a good place their marriage and family were in at the moment. Despite past infidelity and marriage woes, Spelling is most proud of "the growth" her and McDermott have experienced.

"It just gets better, and I think when you go into a relationship, at least for me, you have all these fairy tale expectations. What it should be or shouldn't be, where it's going to go and where it's going to plateau," she explained. "You get to that point where [it's like], 'Wow, this is amazing' on a different level of what I ever expected."