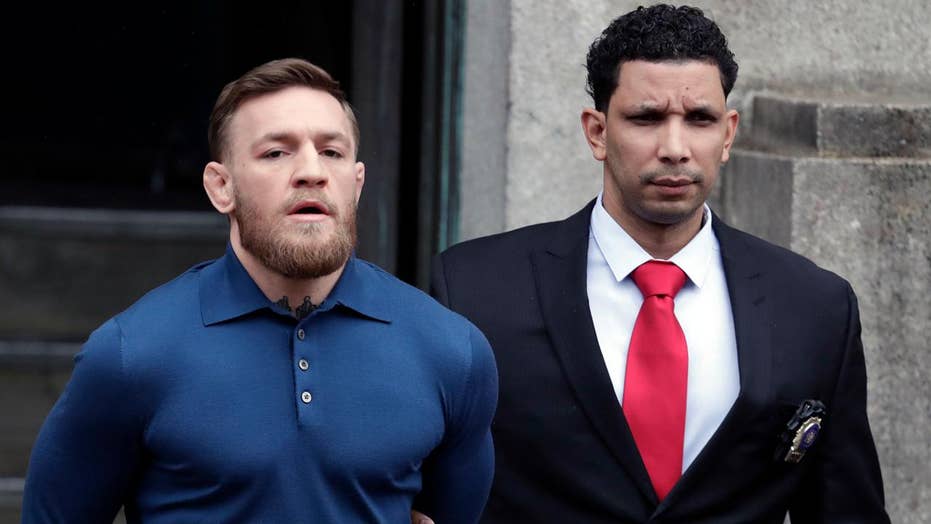 Newly released video showed Conor McGregor shattering a bus window -- and at least one bloody fighter in disbelief -- amid the shocking brawl in New York City on Thursday that landed the notorious UFC star under arrest.

The "UFC 223 Embedded" video, released Friday, showed McGregor outside the bus at the Barclays Center in Brooklyn, pounding on a window and apparently challenging some of the fighters inside. He was heard shouting, "Smash the windows!"

Later in the video, McGregor, 29, could be seen picking up a dolly and hurling it toward the bus, smashing a window.

Fighter Michael Chiesa was seen inside the bus, blood trickling down his forehead. "What the f---," he reacted.

McGregor apparently had tried to throw other large items -- including a metal trash can and a chair.

The UFC star was trying to get at UFC 223 main event fighter Khabib Nurmagomedov because the Russian had been involved in a hotel dustup with fellow fighter Artem Lobov, according to reports. They revealed that McGregor tried to stick up for Lobov, a close friend, and apparently loaded a private jet with his best buds and flew to New York City to rumble.

Chiesa and Ray Borg were hurt in the bus meltdown, and ultimately were pulled from Saturday's fight over their injuries. The bus attack unfolded after a UFC 223 news conference Thursday.

McGregor was arraigned Friday on charges of felony criminal mischief charges and misdemeanor assault, menacing and reckless endangerment charges following a backstage melee he sparked at a UFC event in New York City.

IS CONOR MCGREGOR JEOPARDIZING HIS CAREER?

He spoke only to acknowledge that he understood the conditions of his release, saying, "Yes, your honor."

McGregor was released on $50,000 bond -- pocket change for a fighter who was guaranteed $30 million last year in his ballyhooed boxing match against Floyd Mayweather Jr. McGregor is due back in court June 14.

UFC President Dana White said Friday he spoke to McGregor via text and the brawler said he was sorry, but the confrontation "had to be done."

"It was probably the worst conversation we ever had," White told FS1's "First Things First" on Friday. "We talked yesterday before he turned himself in.

"It's not that I don't think he understood what happened. He justified it. It was justified to him."