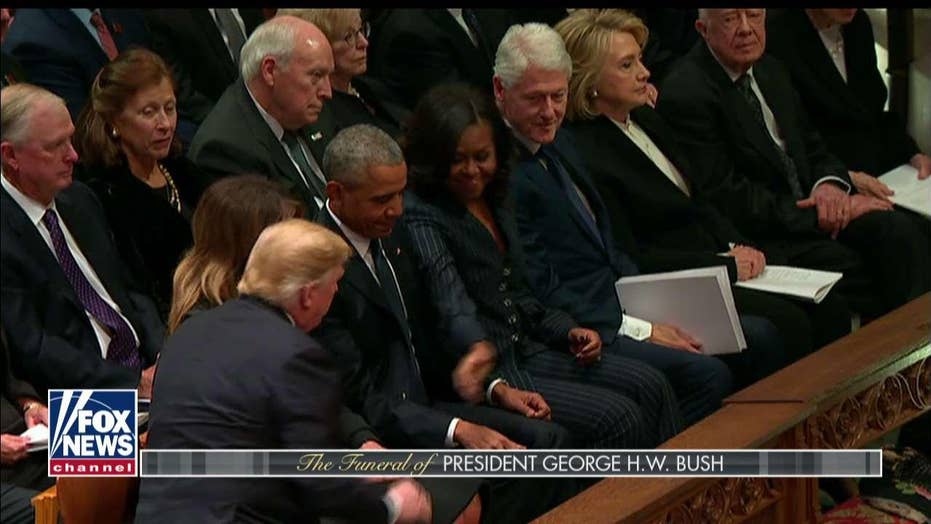 CNN’s Don Lemon was all-in with his anti-Trump rhetoric Wednesday night, saying he wouldn’t shake the president’s hand and bashing him for removing his coat.

Lemon gave his take on the widely discussed arrival of the Trumps at George H.W. Bush’s funeral with his colleague Chris Cuomo — when the current president shook hands with the Obamas while Hillary Clinton didn’t offer him a glance.

“I’ve got to tell you, I’m just being honest, the Obamas are really classy folks because I don’t know if I could be,” Lemon began. “I don’t think I would’ve shake hands with him. I would just — no, couldn’t do it. I’m not that big of a person. I would hope that I would be, but I don’t — I can’t fake the funk, as they say. And I’m not saying that the Obamas did that.”

CNN host Don Lemon said the Obamas are classier than him for shaking President Trump’s hand.

Lemon shot back, asking why the Obamas should show respect for the Trumps when they don’t do the same.

Lemon then demonstrated what he “would have done” at the H.W. Bush’s funeral with a member of the TV crew. When the staffer reached for Lemon’s hand, the CNN host just gave a gentle nod.

'I can’t fake the funk, as they say. And I’m not saying that the Obamas did that'

“This is not about ideology. This is about the way someone conducts himself,” Lemon continued. “If you constantly called me names and you were rude to me and you did petty little — why should I have to show you respect at all?”

Cuomo conceded that Trump’s “aspersions” on Obama were meant to “dehumanize him” and to “play to bigotries,” citing his birtherism push.

“And you want me to shake your hand? S---,” Lemon muttered under his breath before laughing. “I’m just real. I tell you how it is. I’ll smile at you but I don’t have to.”

Later in the evening, Lemon ripped Trump for removing his coat when he arrived at the funeral, calling it a “strange moment” when the president removed his coat and handed it to a uniformed soldier before sitting down.

“What was he doing with his coat on?” Washington Post contributor Sally Quinn, who was a guest on the show, asked.  “He came in a limo. He should have left the coat in the limo. You know, he obviously has a staff and the staff tells him what to do and then he goes rogue. And I can’t imagine that somebody didn’t say, you know, ‘You want to leave your coat in the car, sir?’”

Lemon, like Obama and the Clintons, was the subject of attacks from the current president. Back in August, Trump tweeted that Lemon was the “dumbest man on television.” And during the 2016 election, the then-candidate also called him a “lightweight” on Twitter and that he was “dumb as a rock.”