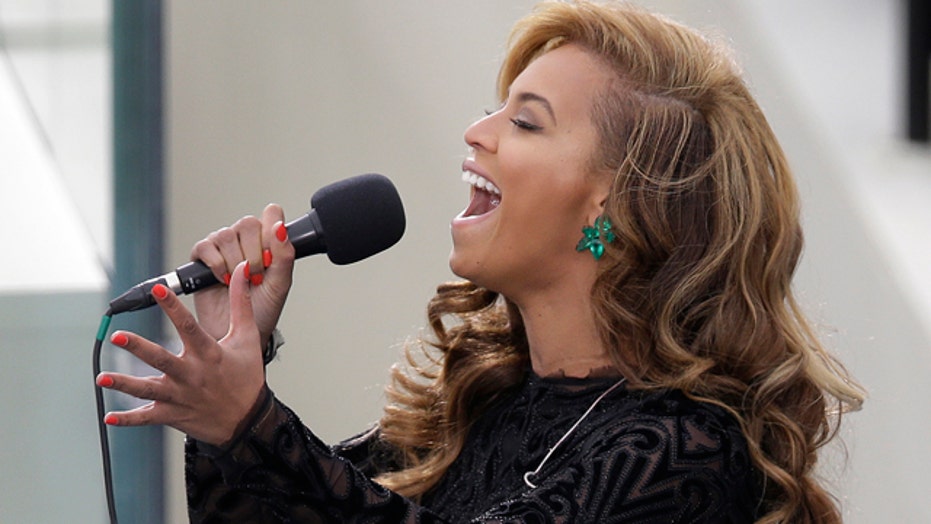 Halfway through her rendition of "The Star Spangled Banner" at President Barack Obama's inauguration on Monday, Beyonce dramatically did away with the earpiece that singers use to hear themselves and their bands in a live setting.

One viewer likened it to the gutsy move Luke Skywalker made in the dramatic chase scene in the original "Star Wars," tweeting: "Taking out the earpiece is Luke turning off the targeting system in the Death Star trench."

But now a rep for the United States Marine Band says Beyonce was not even singing the song live.

The rep said that the multi-platinum singer decided to perform to a pre-recorded track at the last minute.

“All music is pre-recorded for the ceremony because there are so many eventualities and conditions that day,” Kristin DuBois told The Post. “We performed, live, the band. But we received last-minute word that Beyonce was going to use the pre-recorded vocal track. Those were the instructions we were given. We don’t know what the reason why.”

The U.S. Marine Corps later backed off its statements, issuing another that said it determined that a live performance by the Marine Band was ill advised because there was no opportunity for Beyonce to rehearse with the band.

Marine Corps spokesman Capt. Gregory Wolf says no one in the band is in a position to know whether Beyonce's vocal performance was live or pre-recorded.

Sources also tell Fox News that Beyonce was a no-show at the inauguration performance rehearsal on the Capitol steps.

A report in The Washingtonian questions the band's performance as well, citing eyewitnesses at the inauguration who said the band was not playing either. The report also shows an Instagram picture of Beyonce with members of the Marine Corps Band in a recording studio on Sunday.

If the lip-syncing allegations are true, would that make Beyonce's dramatic earpiece drop mere staging, akin to funk legend James Brown's move of dramatically throwing off his cape in his performances?

Calls to reps for Beyonce and the Marine Corps Band were not immediately returned.

Singer Beau Davidson, who sang the "Star Spangled Banner" several times at Mitt Romney's campaign stops, says he delivered all of his performances of the song live, and only once in his career sang over a previous recording, and that was because he had bronchitis.

"Sometimes, as singers, we get sick or vocally tired, and if we can't deliver an excellent performance, we may feel the need to lean on a prior recording," he said. "It's our voice -- sorry Milli Vanilli -- just not live at that moment."

"I think we all know she can hit those notes, and hit them well," Dadvidson added. "I firmly believe in live singing, but if she was trying to deliver a great performance or was singing while sick, I think we all can understand that. She's got a track record of excellence."

Fans seemed to be split on whether or not they cared that Beyonce didn't perform live.

"Even if she did WHO CARES??!? You know she can sing it," one user posted on Facebook.

"What's with all the excuses nowadays? If you're such a renowned singer, then shouldn't you do what you supposedly do best and SING?" another disagreed.

If Beyonce was lip-syncing, do you think that's okay, or should she have sung the albeit very difficult "Star Spangled Banner" live? Go to FOX411's Facebook Page to tell us.