The exchange came as Paul was debuting his new book, "The Case Against Socialism." During a discussion on embattled Venezuelan President Nicolás Maduro, Navarro snapped at Paul.

"Maduro is not a socialist. He's a corrupt, murderous thug," she said.

"Well, that's not true," Paul responded, apparently trying to tell her that Maduro was a socialist. Navarro crossed her arms and asked rhetorically: "Oh, that's not true? Maduro's not a thug and a murderer who's starving his people?"

'THE VIEW' GETS TESTY: MEGHAN MCCAIN ASKS ANA NAVARRO WHY SHE CONSIDERS HERSELF A REPUBLICAN 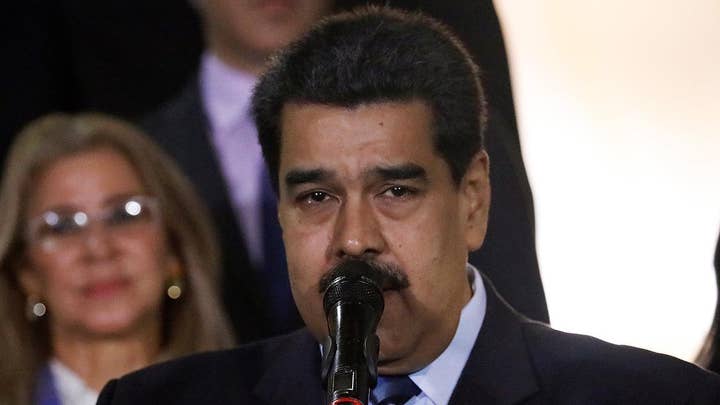 Paul responded by pointing out that former Venezuelan dictator Hugo Chavez was a socialist and claiming that the Venezuelan people voted for socialism. As Navarro shook her head, the Kentucky senator asked her to "let me finish."

"No, I can't let you finish," Navarro shot back, "if you're going to say that Maduro's not a murderous thug."

Paul then turned to others on the panel.

As Navarro continued her verbal barrage, Paul put up his hands in an apparent attempt to ward her off. "Don't do this to me. Don't mansplain," Navarro said, imitating Paul's hand gestures.

Navarro appeared to make the point that Republicans have unfairly used Venezuela as an example of socialism's pitfalls. The clash arose after she questioned Paul on Trump's assertion that if Americans elect a socialist, they'll turn the country into another Venezuela.

"Do you think that's a fair statement to make?" she asked.

"Well, if you vote for a socialist, you might get socialism," he said before Navarro balked at his response. After his appearance, Paul admonished the co-hosts on Twitter and explained his answer in more detail.

The State Department has repeatedly said that the Maduro regime's socialist inclinations are a part of the explanation for Venezuela's dire circumstances.

as pushing socialist policies and has highlighted its socialist inclinations as  a reason for the country's catastrophic conditions.

"Venezuela’s former regime, led by Nicolas Maduro, has consistently violated the human rights and dignity of its citizens, plundered the country’s natural resources and driven a once prosperous nation into economic ruin with his authoritarian rule and socialist economic policies," the State Department said in April. "Maduro’s thugs have engaged in extra-judicial killings and torture, taken political prisoners, and severely restricted freedom of speech, all in a brutal effort to retain power."

That statement came after years of headlines highlighting  the nation's economic straits.  Amid skyrocketing inflation, the Maduro regime attempted to impose price controls and dramatically raise the minimum wage. Stores were threatened with jail time if they increased prices in an attempt to pay for the higher wages.

The Miami Herald reported in September of 2018 that the wage hike forced nearly 40 percent of all Venezuelan stores to shutter.