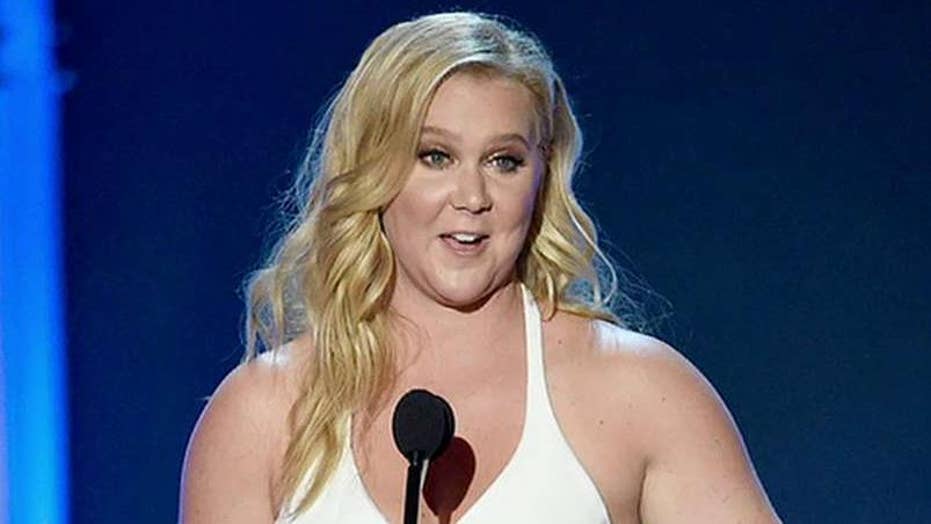 But was the boy being sexist?

Amy Schumer is on the defensive after comedians Tammy Pescatelli, Wendy Liebman and Kathleen Madigan accused the “Trainwreck” star of lifting their material.

“Between Amy Schumer doing 1 of my best jokes on her HBO special and this meme of my joke, I’m done with social media,” Liebman wrote in a since-deleted tweet (the meme was unrelated).

Fellow comedian Chuck Martin chimed in in response to Liebman:

Pescatelli responded in a series of deleted tweets captured by Refinery29, writing, “What has always been amazing to me is that she purports to be a feminist and yet only steals from other female comedians. If we call her on it we are ‘jealous’ or career shamed. Be successful. WE want you to do well, just do it will your own material. BTW she blocked me.”

Schumer, 34, appeared on the “Jim Norton Advice Show” on Wednesday to defend herself against Pescatelli. “I’m literally going to take a polygraph test and put it on my show this season, and I promise whatever the results are — I won’t let them cut,” she told Norton.

She continued: "I’ve definitely never seen Tammy Pescatelli. Like, I didn’t happen to catch her 2006 Comedy Central special and like, sit on that bit til I got a movie. Like, I sat on that bit for nine years and then was like, ‘Here’s my chance to steal that famous Tammy P. bit’ … I think Tammy’s trying to get something going … I think she doesn’t have much going on, that’s just my guess. I opened for her on the road in 2007. I think it’s just hard to see someone doing well. I think Tammy pictured a different life for herself and a different outcome."

The “Inside Amy Schumer” star was softer on Madigan and Liebman.

“I’d never seen Kathleen Madigan’s Oprah bit. Both Kathleen and Wendy believe me, they know me. The Kathleen thing … I came up with the scene ‘Sleep Gym’ and one of the other writers came up with ‘Slap Chef.’ Kathleen’s a great comedian; I’ve never seen one of her specials … Kathleen knows me, and [she] has backed off.”

She added, “The Wendy joke — I love Wendy Liebman, she’s one of my heroes. I looked at the footage that they showed [in the video]. She did a joke in the ’90s … I didn’t know Wendy til I got older, I never would have seen her standup in the ’90s, but I love her. Her joke [has] the same punchline as mine.”

Schumer claims the accusations are a result of jealousy. “People build people up and then like to rip them down when they experience some success. I think people get upset by success … I don’t even take it personally. I will not be another one of those comics who gets accused of stealing jokes. That will not be part of my name. I will not take this lying down.”

Later, Schumer took to Twitter herself to clear her name.