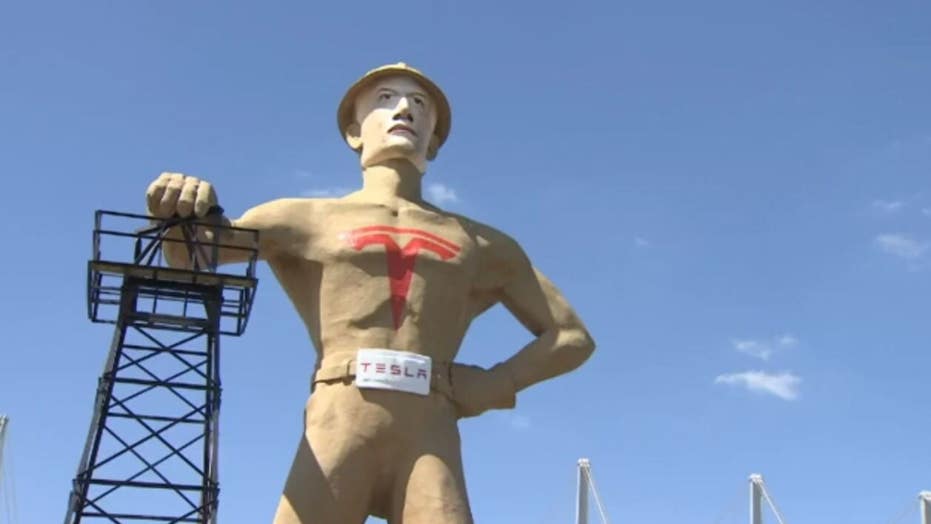 Elon Musk is now a true giant of industry.

Tulsa has transformed its landmark 75-foot-tall Golden Driller statue into a likeness of the Tesla CEO in a bid to convince him to open a new factory in the Oklahoma metropolis.

The statue, which is the fifth-tallest in the continental U.S. and stands outside the Tulsa Expo Center, was built in the 1960s as a tribute to the state’s petroleum industry. Its electrifying makeover included replacing its “Tulsa” belt buckle with one that says “Tesla,” adding the automaker’s logo to its chest and painting its face to resemble Musk’s.

Tesla is currently looking for a location for a second U.S. automotive manufacturing facility to build its Model Y utility vehicle and upcoming Cybertruck pickup, and has reportedly narrowed down its choices between Tulsa and Austin, Texas.

ELON MUSK SAYS THE CYBERTRUCK HAS BEEN SHRUNK, CAN FLOAT

The Wednesday stunt was put on by the Tesla Owners of Oklahoma, and supported by Mayor G.T. Bynum.

Bynum couldn’t discuss details of any ongoing talks with the automaker but told Tulsa World that the effort isn’t about making Austin look bad.

“I think this is about convincing people that Tulsa is the best fit for Tesla, and I really do believe that,” Bynum said.

Musk is yet to comment on Tulsa’s unique sales pitch.