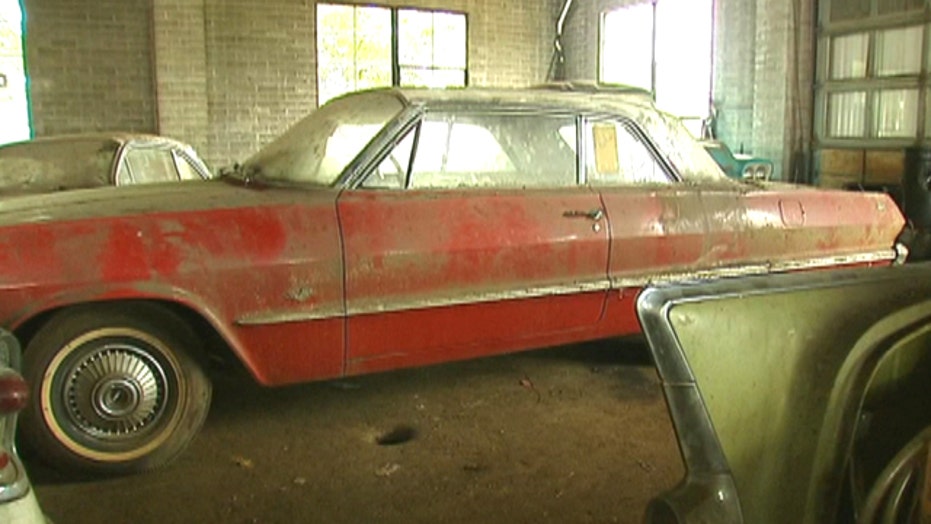 When Ray Lambrecht closed his Chevy Dealership in the little town of Pierce, Nebraska in 1996 he did it without fanfare, according to auto auctioneer Yvette Vanderbrink. "It is amazing, you know he just went home. Just decided today's the day I'm going to retire and locked the doors and everything was left just as it was."

What was left included some 500 unsold cars, many of them brand new models with less than 20 miles on the odometer. Something of an eccentric, Lambrecht believed in only selling new cars. If a vehicle didn't sell, he would take it off the showroom floor and put it storage. Trade-ins were also stored, many of them simply parked out in a large field on the edge of town.

All of the vehicles will be auctioned off this weekend and the sale has drawn attention across America and beyond. "It's kind of amazing," says Pierce resident Rick Sirek. "I have a secretary down here that was in Sweden about ten days ago...and she heard people in the lobby in this hotel in Sweden talking about this Lambrecht car sale here."

The reclusive Lambrecht, who has declined all interview requests, opened his dealership in 1946 when GM was looking for franchises in small towns across the country. Now 96 and with health problems, he has finally made the hard decision to sell off his stash.

"These are his children, these are his babies," explains Vanderbrink. "And he wouldn't let anybody have any of it. It was his, kind of his legacy, and now he's decided to turn 'em loose and offer them to collectors."

Vanderbrink gave Fox News a pre-auction tour of many of the vehicles. "They're everything from nice ones to ones that were new and then got outside in the elements,” she said. “This is a '65 Impala two-door hardtop. It had some water that came in a little bit, the carpet's been pulled out. But it is a new car with paperwork and 10 miles."

Other cars in the auction include a 1978 Chevrolet Indy Pace Car Corvette with just 5 miles on the odometer, and a 1958 Cameo Pickup with only 1.3 miles on it, likely the lowest-mileage Cameo in existence. Some of the finest vehicles have been kept under wraps and will only be revealed at auction. All of the cars come complete with documentation.

Not everyone is coming to buy as town resident Joyce Anderson points out.  "I just know that my husband and his kids are very excited to come because (Lambrecht's) got a couple cars out there that his dad owned. A lot of people have parents or people that have cars out there and they just want to go look at them again."

The town of 1800 expects more than 8,000 people to show up for the auction and hotels are booked for more than two hours in any direction. There is even an unconfirmed rumor that Jay Leno's people will be there to do some bidding.

Vanderbrink says the excitement is understandable. "We're saving automotive history. Cars are a big part of that in people’s lives. They remember bringing home that baby or the day they came home from that honeymoon. That first car or first date or, you know...," she laughs. "It's a part of America, it's a part of our past."

This weekend was specifically picked for the auction because there was no University of Nebraska football game scheduled: an important consideration for drawing a crowd in the Cornhusker State.