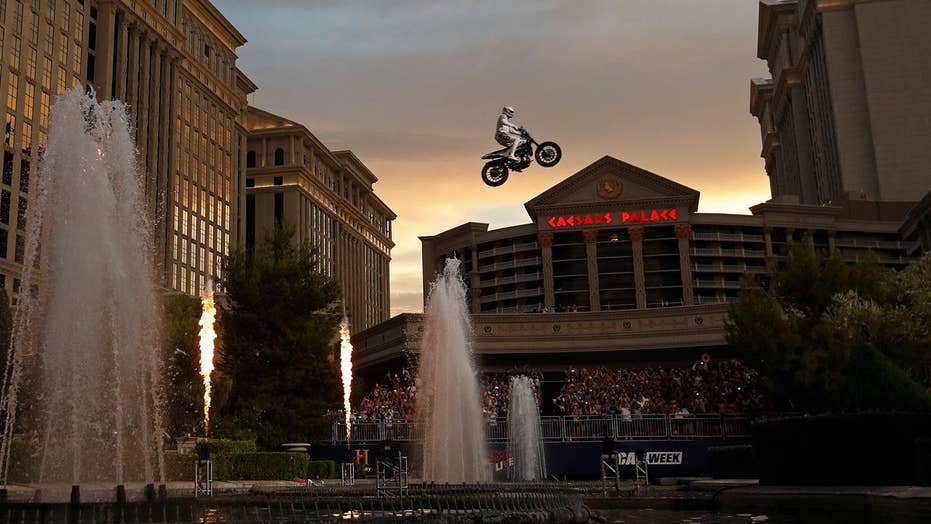 Dressed in a replica of Knievel’s signature white riding suit with a star-spangled blue V across the chest, the Nitro Circus star jumped 152 feet over 52 crushed cars, cleared 16 Greyhound buses and flew over the Caesars Palace fountains, a stunt that nearly killed Knievel 50 years ago.

"It's just such an honor to live a day in Evel's footsteps, and literally his boots," Pastrana said. "To be here in Las Vegas, so much of my history has been here. I proposed to my wife here, I had (the) first Nitro Circus show here. This was definitely the coolest thing I've ever done."

The first two jumps were each longer than Knievel’s versions, while the jump over the fountain had to be done in the opposite direction due to new construction around it. Knievel crashed on his attempt, breaking his pelvis and other bones.

Left with just 200 feet to accelerate to 70 mph before the ramp, Pastrana said, "It's not the longest jump, but it's definitely the hardest."

Knievel’s son Robbie successfully jumped the fountains in 1989, but as a one-off jump.

Pastrana landed each of his jumps perfectly, despite riding a modified Indian flat track motorcycle similar to the type of Harley-Davidson that Knievel used, which is heavier and less suitable than a modern motocross bike for these types of stunts.

The 34-year-old Pastrana celebrated by taking one final jump ─ without his motorcycle ─ into the fountain.