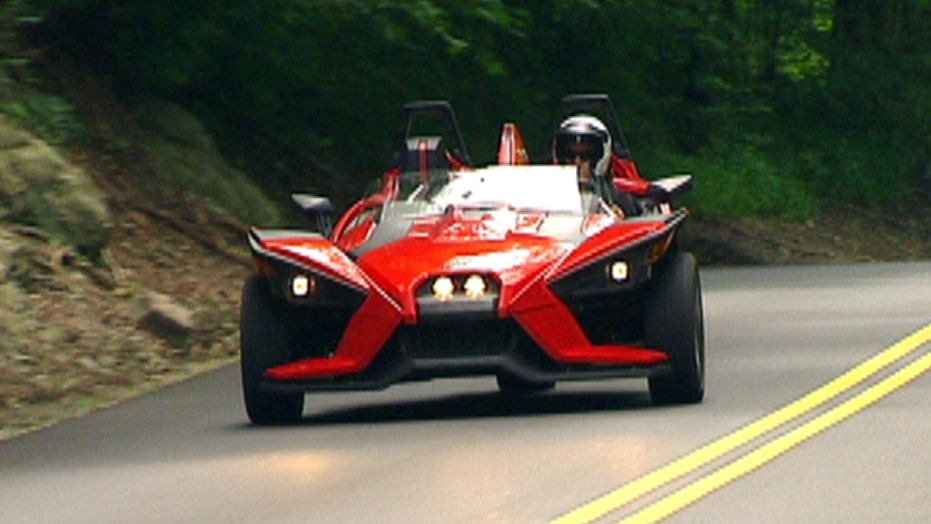 The Polaris Slingshot is so different from other vehicles that states are writing new laws to accommodate it. FoxNews.com's Gary Gastelu takes the three-wheeler for a spin to find out what all the fuss is all about.

The Polaris Slingshot is rewriting the rules.

The federal government says the new three-wheel speed demon is a motorcycle, but the states have their own ideas. California lets you operate it with a driver’s license; New York requires a motorcycle or specific three-wheel endorsement; Maryland just says no, for now.

Texas, Indiana and Connecticut? They didn’t know what to make of it, so they worked with Polaris to pass new laws this year to create a new “autocycle” class to accommodate it. That’s right, the Slingshot messed with Texas … and won. (Maybe Tesla should ask Polaris for a little advice on how to do that.)

So what’s all the fuss about?

The Slingshot isn’t the first or only three-wheel vehicle available in the United States. You’ve been able to buy a Campagna T-Rex or Morgan 3 Wheeler for years. But those are low-volume efforts. Polaris is a leisure and utility vehicle giant, selling tens of thousands of ATVs, side-by-sides, snowmobiles and motorcycles – under its Victory and Indian brands – each year, so it’s got the manufacturing might to put together a pretty serious machine and build a lot of them.

Still, making an actual car costs an enormous amount of money in safety testing alone, which is why you don’t see too many startup automakers. It’s also why cars are so bloated these days, what with all the airbags, rollover protection, side impact intrusion bars, etc. By going the three-wheel route, the Slingshot is exempt from all of that, which means it can be stripped down to the bare necessities.

In this case, those are a 2.4-liter four-cylinder automobile engine sourced from General Motors, rack and pinon steering and a 5-speed manual transmission that sends power through a belt drive to a single rear wheel riding on a motorcycle-style swing-arm suspension.

All of it is connected to a steel space frame covered in angular, stealth fighter-style composite bodywork. It weighs a scant 1,700 pounds or so – less than any car on the road today, about 600 pounds lighter than the latest Mazda MX-5 Miata.

The furnishings are the same grade as a Polaris Ranger side-by-side’s, right down to the waterproof seats and dashboard, but the two-seater has a lot of room for its passengers. There are lockable compartments behind the seats that are large enough for helmets or backpacks, a big glove compartment and even cup holders. This is a made-in-America product, after all.

A six-speaker audio system is available with AM/FM, Bluetooth and, since there’s no roof, a weather channel. I can’t say I ever turned on the radio in the day I spent turning heads and soaking up the sun in the Slingshot, but the Google Maps lady sounded loud and clear.

So did the engine when I fired it up. The exhaust is under the hood, just on the other side of the passenger’s footwell. It delivers a visceral treat that’s been so refined out of most sports cars that they’ve started adding digital backing tracks to make up for it. No need for that here. It runs on 91 octane, and there’s no official fuel economy rating, but figure on getting anywhere from 25-35 mpg.

Although it’s primarily positioned as a safer, easier-to-operate alternative to a high-end motorcycle, the $21,999 Slingshot drives just like a car at normal speeds. A car with no doors that you can reach out of and file your nails on the pavement from.

The 173 horsepower engine has no trouble rocketing you down the road, or spinning that rear tire. The Slingshot comes standard with traction and stability control, but there’s plenty of leeway before it stops the fun, and you don’t have to go too fast to start having it. The base model doesn’t even come with a windscreen, and the deflector that’s available leaves plenty of wind in your hair and elsewhere. A full-face helmet is recommended since you’re sitting so low, and your first encounter with flying debris is all the explanation you need.

I took it for a short trip on the interstate, just to see what that was like, and the semis made me feel like I was in Princess Leia’s transport ship in the opening scene from Star Wars. But their wakes didn’t push it around too much. It was very stable and rode pretty well at high speeds.

Still, windy country lanes are its element, and puttering along at 35-40 mph is a joy. The only drawback there is that the front end is as wide as a pickup truck’s, so be sure to share the road. If the one you’re on happens to be empty, and you start getting a little frisky, you’ll discover that the Slingshot behaves less like a car and more like, well, something else as you approach its limits.

It leans differently in the curves, understeering when you enter one, kicking the tail around if you get hard on the gas and then combining the two in a bizarre powerslide if you stay on it. It’s thrilling and unique, but whether you’re trading in a car or motorcycle for one, I suggest working your way up to it.

The brakes take some getting used to, too. The pedal needs a good push, and even then they feel a little weak. It could use either more rubber on the road, or bigger discs. But if they catch you off guard and you end up in a ditch, the Slingshot has rollover bars and seatbelts, so you can’t fall off of it. That kind of margin of error is its greatest selling point when compared to its motorcycle brethren. Cars still have it beat on “the keeping bumpers out of your face” criteria, but where’s the fun in that?

Nothing with four wheels can compete with the elemental, riding-around commando experience of the Slingshot. The last new car I drove that came close was the Lotus Elise, and that’s not on sale in the U.S. anymore because it can’t meet the latest safety regulations.

Polaris doesn’t release exact sales figures, but, based on a January recall that affected 1,896 vehicles, it’s probably already sold more Slingshots than Lotus did Elises in the seven years they were on the market, and the Miata is in its sights. If only they can build enough. One dealer told me he’s sold 30 so far this year and could’ve moved twice that if he could get his hands on them. Order one today and you’ll be lucky to get it before the fall.

Sorry, the Slingshot doesn’t have a heater, but it is setting the three-wheel segment on fire, and redefining it as it does.