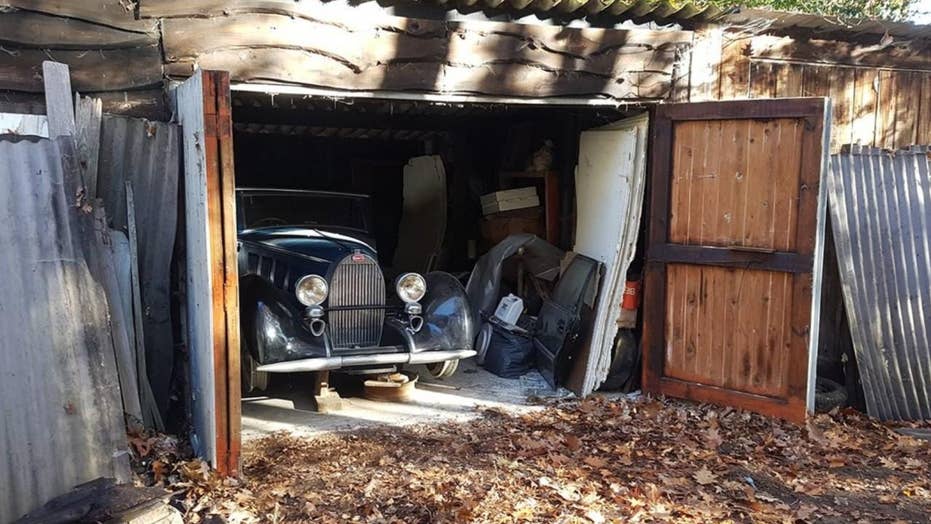 Three old Bugattis were recently discovered in a locked barn and are now heading to auction in Paris. They could potentially sell for well over $1 million combined.

A trio of treasured Bugattis kept locked in a barn for years by the family of an artist could sell for a small fortune when they are auctioned next week.

Belgian sculptor August Thomassen purchased the three vehicles in the late 1950s and early 1960s when they were practically worthless to everyone but him. His daughter told the De Telegraaf newspaper that he loved their engineering and unusual styling.

AMAZING COLLECTION OF 81 'BARN FIND' CARS WORTH A FORTUNE

He kept them running and used them as daily drivers for years, becoming such a fan of the brand that he sculpted a bust of the automaker’s founder, Ettore Bugatti, which today resides at the National Automobile Museum in Mulhouse, France.

The artist started building his own bodywork for the Type 40, but only got as far as the wood frame. (Artcurial)

His 1932 Bugatti Type 49 Berline and 1937 Bugatti Type 57 Cabriolet each feature custom coachwork, as was the practice of the day. He was creating his own for a 1929 Type 40 after it was damaged in an accident, but never quite finished the job. Its exposed wood frame still waits for new body panels to be hand-formed and attached to it.

Over the years, as the value of the cars increased, Thomassen received many offers from interested parties who had heard about them, but he had no interest in letting them go at any price.

"We regularly had enthusiasts at the door who wanted to buy the cars,” his daughter said. “But my father refused to sell them. Even though we hardly had money as a family. You can safely say that we were poor."

This Type 49 Berline features coachwork by Vanvooren and was used as a show car in 1932. (Artcurial)

Since they didn’t have enough money to insure the cars, they decided to lock them up literally and metaphorically, parking them in Thomassen’s studio barn in Belgium with piles of sandbags blocking the door and never speaking of them in public. The family is so averse to drawing attention to them that the daughter only agreed to speak to De Telegraaf anonymously.

But last year someone broke into the building during what was suspected to have been a recon mission for a theft. With Thomassen now 95 and unable to drive, the family decided it was time to get rid of them, along with a 1925 Citroen Torpedo that was also stored away.

After contacting several auction houses, they settled on Artcurial, who sent a team to examine and retrieve the vehicles. Company director Matthieu Lamoure called it “the stuff of dreams,” and said that he’d “never imagined finding such sleeping beauties.”

Artcurial director Matthieu Lamoure was with the team that recoverd the Bugattis along with the Citroen Torpedo he is leaning on in this photo. (Artcurial)

The cars will be crossing the block on Feb. 8 at the Retromobile event in Paris, where they should sell for well over $1 million combined. The all-original Type 57 is expected to fetch as much as $750,000 on its own.

Thomassen’s daughter doesn’t know what they’ll do with the money yet, but said that "it must be something that becomes a tribute to my father."